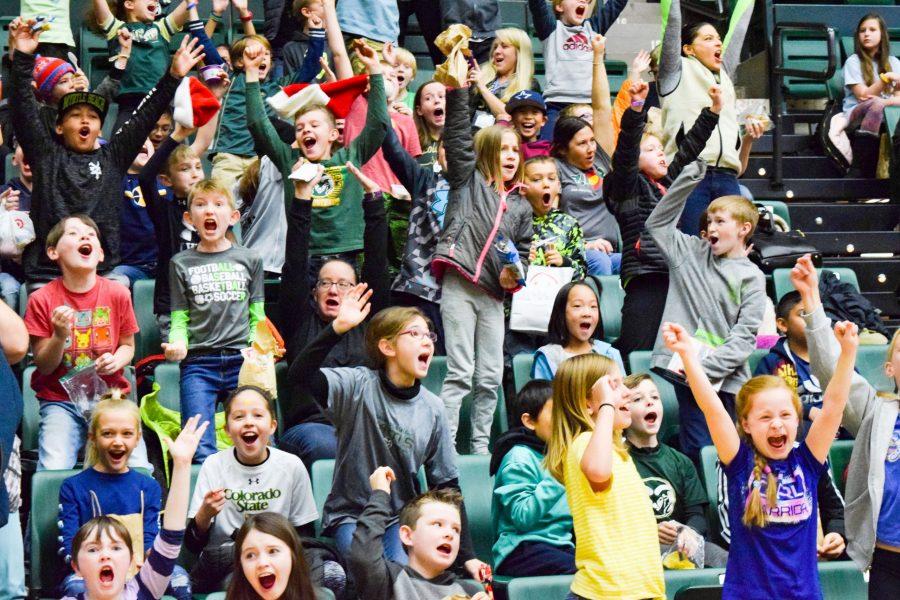 Looking to perk up their matinee matchup, Colorado State welcomed 1574 youngsters from multiple elementary schools throughout the Poudre School District Wednesday, a decision that fueled the Rams to an upset over Northern Arizona, 65-54.

“There’s something to be said about people in the seats,” Coach Ryun Williams said. “This was one of the best games we played this year.”

For the early portion of the year, the Rams struggled mightily on offense.

“I didn’t want to disappoint the kids. We moved the ball (well) and we ran a lot. That gave us a lot of good options.”Lore Devos, sophomore

Coming into the game, the Rams averaged 52.5 points per game, dead last in the Mountain West Conference. That scoring mark came on a middle-of-the-pack 36.7 percent from the field shooting mark.

In their lopsided win over the Lumberjacks, their troubles subsided as the hosts jumped out to a 22-9 lead early in the second quarter.

On offense, the Rams were led by Preseason MW Newcomer of the Year Mollie Mounsey. After a torrid start in the team’s exhibition season, Mounsey averaged 9.5 points per game through the Rams’ first half-dozen games. That tally, though good for second on the team, paled in comparison to her 21 points-per-game mark in a pair of preseason games.

With their scoring total rising, the Rams were still unable to operate efficiently from the field in the opening half, shooting below their season average (36.1). Leading the outburst instead was a 7-3 turnover margin in favor of the hosts.

On the other end, the Rams held NAU’s Kaleigh Paplow in check, limiting the forward to 15 points on 5-19 shooting. A former Lutheran High School standout in Parker, Colorado, Paplow made her first appearance at Moby Arena as a collegiate player.

“She’s a high-volume (shooter),” Williams said. “We wanted her shots to be contested. She’s gonna get some attempts, (but) I thought we did a nice job.”

Though their defense on Paplow remained steady, the Rams began to see issues arise that have been consistent throughout the year in the second half. A lack of scoring prowess led to a comeback from the visiting Lumberjacks after being down double-digits for much of the first half.

Mounsey, the leader of the first half, began to struggle shooting, along with most of the team. After eight points in the first half, the sharpshooter hit 1-5 shots in the second half en route to a mere five points.

When Mounsey began to struggle, so did the Rams’ scoring attack, now limited to inside scoring.

“I think I just have to make shots,” Mounsey said.

Lore Devos, the only Rams player averaging double-digit scoring on the year came through late in the game. Devos’ 18-point second-half effort paid dividends in the team’s weathering of the Lumberjacks’ run led by freshman Regan Schenck.

After a scoreless first half, Schenck sank a trio of 3-pointers en route to an 11-point mark in the second half alone. The effort from the young guard came despite a six-point per game average through NAU’s first six contests.

“We left some 3-point shooters a little free,” Williams said. “But for the most part a really nice job (by our defense). I think if we would play more consistently offensively, we wouldn’t put so much pressure on our defense.”

In all, Devos scored 23 in the game, good for the second-highest mark of her career.

“I didn’t want to disappoint the kids,” Devos said. “We moved the ball (well) and we ran a lot. That gave us a lot of good options.”

As the Rams inch closer to their conference slate to conclude the season, the team will play host to another Arizona school in the form of No. 17 Arizona State. The showdown with the Sun Devils will tip off Sunday at 2 p.m.