Sports for Dummies: The basics of hockey for newcomers 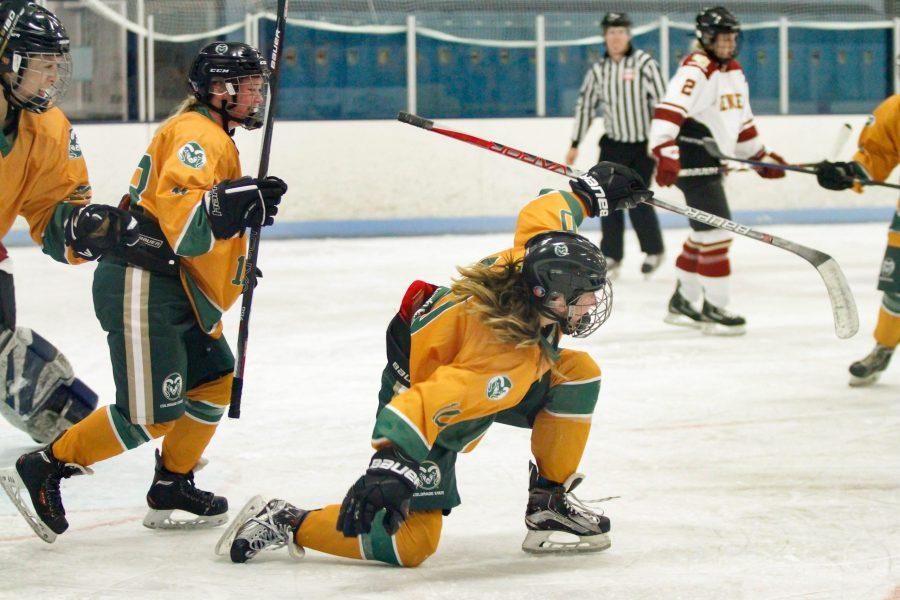 Stephanie Talone celebrates after scoring a goal in the game against the University of Denver on Sept. 22, 2018. (Ashley Potts | Collegian)

I was taking photos at a Colorado Eagles game last season and found myself sitting next to a particularly talkative fan. One of those that screams profanities at the opposing team and has an arsenal of insults for the goalie ready to go at any given time.

I didn’t think anything of it until I noticed him pull out his phone and Google “how many quarters are in a hockey game.” I rolled my eyes, but looking back now I can admit that hockey is a little odd. Get it? Because there are three periods in a game.

But since hockey is kind of a foreign concept to the general American population, I figured I’d break it down.

This is pretty basic and happens often during a game. A power play happens when someone on the opposing team is called for a penalty and is sent to the penalty box for two or more minutes depending on the infraction.

While their player sits in the box for two minutes, your team has an advantage. You play 5-on-4 and ideally create an opportunity to score while you’re up. When you do score on the PP, it’s pretty exciting.

This is exactly the opposite. This is when a player on your team gets called and has to sit in the box for two minutes. The other team then has the advantage and you hopefully stop them from scoring. If you successfully defend their advances for two minutes, it’s also pretty exciting.

This is where things get a little confusing. Icing is similar to offsides, but also different. Hockey has three lines; the center line is a halfway line and the other two blue lines indicate offensive zones for each team.

Icing is when the puck crosses the center line and the other teams’ blue line without being touched by an opposing team’s player. I say it’s similar to offsides in that it’s essentially in place to avoid cherry-picking and breakaways. It’s a rule hockey has in addition to offsides, so both can be called in hockey.

This is a word meant to describe a player who is good at fighting and not much else.

It’s a little outdated and there has been talk of goons no longer existing as the game of hockey has progressed. They’ve also been referred to as enforcers since that’s a little more flattering.

Regardless, it’s still fun to watch players drop their gloves and punch each other in the face, and it’s kind of fun to follow a team and see the players who do so consistently. There are even a few funny movies out there surrounding goony hockey players and an actual documentary on enforcers.

Put the biscuit in the basket

Hockey also has a lot of slang, probably because of its Canadian roots. The “biscuit” refers to the puck and the “basket” is the goal. So this basically means to score a goal, but in a very slang way.

This is slang for celebration. Hockey is known for having some pretty good celebrations after players score goals. Each player has their own celebration and they include a simple fist pump, flying eagles, bow and arrow shooting and various other weird and fun shows of excitement.

There are a ton of other weird slang words that come out at hockey games that are rooted in tradition and Canadian-ness, so keep an ear out for those. But, hopefully, now you won’t have to Google in the middle of your trash talking.

Ashley Potts can be reached at sports@collegian.com or on Twitter @ashleypotts09