Rams rolling on to yet another NCAA postseason appearance under Hilbert 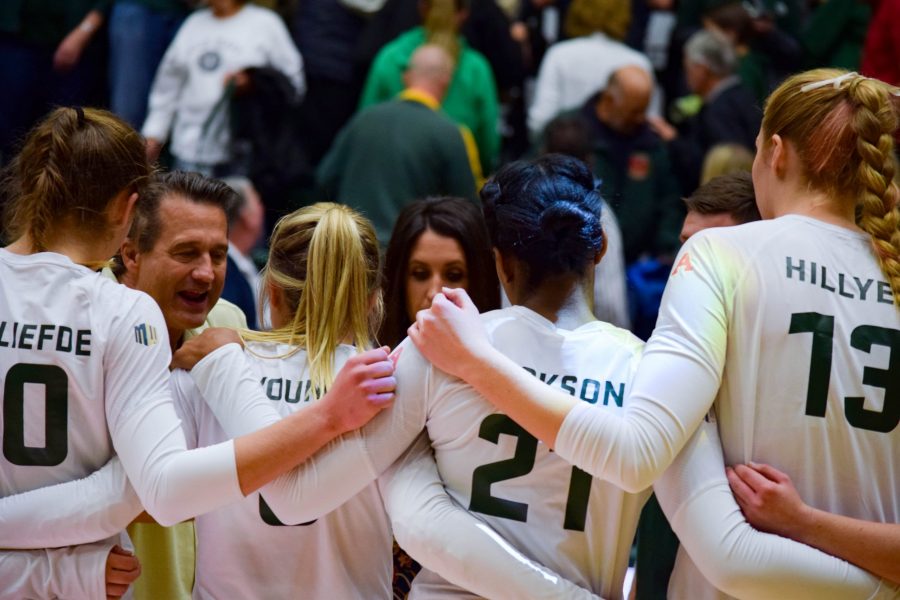 Tom Hilbert, coach of the CSU womens volleyball team, speaks to the team after their win against San Diego State on Thursday October 25, 2018. (Alyse Oxenford | Collegian)

Colorado State volleyball coach Tom Hilbert made his way to Fort Collins prior to the 1997 season. In that time, not a single Rams’ team under his guidance has failed to make the NCAA Tournament.

The streak reached 22-straight seasons Thursday night as the Rams swept the University of Nevada-Las Vegas Rebels, stretching their winning spree to an even dozen (25-17, 25-16, 25-20).

Coming into the match, the Rams had not only a Mountain West Conference Championship on the line but also an active four-year home win streak against conference opponents.

“After losing two games at the beginning of the season, that was the most pressure on our team,” redshirt sophomore Breana Runnels said. “But we’re also trying to improve throughout the whole season, especially looking forward to (the) tournament.”

Adhering to their lofty standards, the Rams clinched their eighth MW title in the last nine years, the 15th in program history.

Riding the wave of their newly-minted aces record for a season in the modern era, the Rams jumped out to a 4-0 lead, two of the points coming by way of a service from junior Olivia Nicholson. The aces have become commonplace for Nicholson as she maintains a team-leading 34.

Taking over for fellow junior Amanda Young following a shoulder injury, Nicholson has served as a catalyst for the Rams’ team. Whether it has been an additional setting force alongside junior Katie Olesak, or a consistent force on defense, the third-year “Swiss Army knife” for the Rams has stepped up.

As a result of the Rams’ match against the Rebels, Nicholson upped her season totals to 281 digs and 55 assists, with the aforementioned team-lead in aces to boot.

The four-point lead to begin the match ended as an eight-point set victory, setting the Rams up with the early lead yet again. In matches where they won the first set, the Rams are now a perfect 19-0 after their win over the Rebels.

“We need to come out and be consistent,” Hilbert said. “I do think it’s important to play well at the beginning of a match, but we need to play well in third sets (too). I just want (us) to play well the whole time.”

Outside of four ties, the Rams maintained a lead for the entirety of the set.

The trend continued in the second, with the hosts holding the lead throughout sans a 1-0 deficit at the onset.

Coming off of her third Mountain West Player of the Week accolade, redshirt junior Kirstie Hillyer tallied a team-high 11 kills through the first two sets. The Bayfield native finished the match with 16, adding to her single-season career high of 296 coming into the match, eclipsing 300 for the first time in her career.

“Honestly, I didn’t know I was at 300 kills,” Hillyer said. “But it feels really good and I (just) want to keep moving forward.”

On the outside, redshirt sophomore Breana Runnels, the lone Rams’ hitter ahead of Hillyer, tallied 12 kills of her own to move within 17 of the programs’ single-season kills record in the modern scoring era.

The third and clinching set for the Rams was the only contested frame. The Rebels, fighting to stay alive against the reigning conference champions found their groove. Led by a trio of service errors from the Rams, the Rebels stretched their lead to three, their largest margin of the match.

“We kind of had a rocky start in the beginning (of the year),” Hillyer said. “None of us want to face that again, so I think if we get down a couple points, everybody wants to come back and play as hard as they can to get out of that.”

Weathering the storm, behind the arm of Hillyer, the Rams trudged their way to a third and final set victory. Adding to her match-high, Hillyer accumulated five kills in the final frame.

The Rams will now head into their Senior Night match against the University of New Mexico Saturday, nary a pending graduation to celebrate. The knowledge of next season with the same squad is not a crutch for the team to lean on though.

“I don’t think anybody wants to overlook this postseason,” Hillyer said. “We know that we have a good team, we know we can do some good things in the tournament, so that’s what we’re going to focus on as much as we can.”