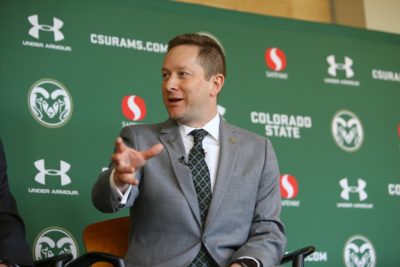 Coaching with anger, instilling fear to get a point across and throwing chairs out of frustration are all tactics that can be attributed to former Colorado State basketball head coach Larry Eustachy.

All of those tactics characterized the toxic environment Eustachy created. Following his resignation, a coaching change in Fort Collins was necessary, to say the least.

CSU players needed a positive role model and a coach they actually wanted to play for, not someone that they were afraid to make mistakes in the presence of.

So once Eustachy’s misconduct came to light, it was out with the old and in with new: Former Drake University Head Coach Niko Medved was hired as the head coach March 21.

Medved has brought a polar opposite personality to the team that he was once an assistant coach for from 2007-2013.

Any coach brought into this situation would make an effort at developing a new culture, but Medved has gone above and beyond in doing so.

“Since we’ve gotten here, we’ve really tried to spend time getting to know these guys,” Medved said. “When you can buy into something like that, great things can happen.”

Even when it is for the better, change can be difficult, especially for players who have played under a different coach for quite some time.

“I think we are just more of a team,” Carvacho said. “We are just really close. Coach Niko and all the other coaches really help keep us together and not spread us apart. The culture change is everything positive. I think that is going to help a lot and show up on the court.”

It was extremely difficult for CSU players to maintain an ideal level of focus as Eustachy’s conduct made national news.

CSU finished 11-21 (4-14 last season), marking the program’s first under .500 finish in nine seasons. Players’ attention was unwillingly detered from basketball in the midst of Eustachy’s resignation.

The Rams have been given a clean slate and can now solely focus on basketball, instead of wasting their energy on a situation that they couldn’t control.

Current Rams are vocal about the sense of relief they have experienced.

“When all that turmoil was happening, a lot of us kind of split ways,” Masinton-Bonner said. “Obviously when that happens the whole team chemistry breaks down and you can’t win a game. … There were just a lot of distractions. … It was hard to deal with for young guys like us (when) we are still trying to mature. We moved on, and I’m really happy about where we are at right now.”

Medved’s character has not only been demonstrated in words, but in the actions of others. When it became public that Medved decided to come to CSU, others followed.

Assistant coaches Dave Thorson, JR Blount, Ali Farokhmanesh and Director of Men’s Basketball Operations Aaron Katsuma were all members of Medved’s staff at Drake last season. They all came along with Medved and now hold the same positions on CSU’s coaching staff.

They all came along with Medved and now hold the same positions on CSU’s coaching staff. That really speaks to the head coach’s character.

Medved’s entire coaching staff weren’t the only ones who were determined to stay with the coach.

Freshman guard Kendle Moore originally committed to Drake, but once he found out that Medved left the program, Moore reopened his recruitment.

Shortly after, the CSU head coach offered Moore a scholarship, securing him as a member of the Rams.

The guard led all scorers in the Rams’ exhibition game last Saturday against CSU-Pueblo with 19 points on 7-9 shooting from the floor.

Freshman forward Adam Thistlewood also left Drake for Fort Collins and has shown he is a significant addition to the team. The forward scored 16 points and accumulated seven rebounds in the Rams’ exhibition game last week.

“Definitely his personality stuck out to me,” Thistlewood said. “He really cares more about your character and your person off the court than sometimes on the court. He cares about academics, character and then, obviously, basketball.”