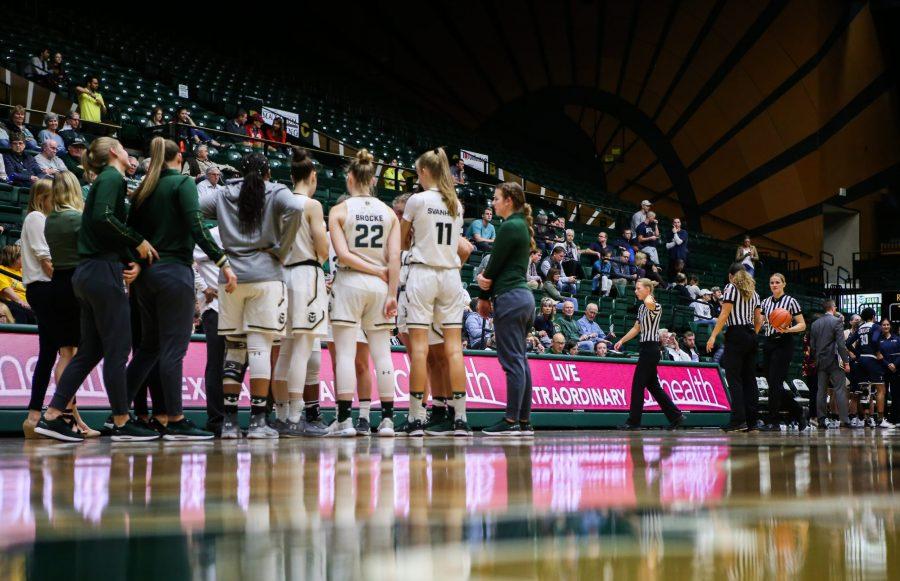 CSU Womens basketball huddle up during the exhibition game on Nov. 2. (Tony VIllalobos May | Collegian)

With their first two games of the season in the books, albeit exhibitions, Colorado State women’s basketball has yet to fall.

In total, the Rams won both games by an average margin of 17.5 points. Here’s a trio of takeaways from the preseason that was:

The newcomer has started hot

Brought over as a transfer from Seward Community College, junior Mollie Mounsey had been lauded for months by Coach Ryun Williams as a dynamite shooter from outside.

With a track record of the most 3-point makes from outside in the nation for women, the stats backed up the claim. In her first game, Mounsey started right from where she left off.

The native of Follett, Texas made her first six from outside the arc, making seven of her eight attempts in total. When the final whistle blew, Mounsey had accumulated a game-high 28 points without a single turnover, something Williams was happy to see.

“Mollie is just a very good basketball player,” Williams said. “She can be a playmaker off the shot fake, she’s got incredible (shooting) range. We played her a lot of minutes… she was probably our best defender.”

In the second exhibition, Mounsey performed much the same, posting 14 points on 4-5 from outside the arc. The guard also had five rebounds and two steals to round out her totals.

In all, Mounsey scored a team-high 42 points and shot 10-14 from outside and played exactly 36 minutes in each contest.

Known for his defensive emphasis, Williams has built several top-notch defensive units in his time at the helm of the Rams. This year appears to be a little different.

The defense has kept its candor, but the emphasis on forcing turnovers via steals and blocks has greatly increased.

“I think we should be active,” Williams said. “When we played with active hands (and) active feet, it sparked us offensively. We preach activity with good discipline.”

An emphasis on forcing mistakes from the opposition was exemplified in the constant arm action of the Rams’ defense. Whether it was in the air or to the sides, the preaching of hands always being up has increased since last year.

“(It’s helped) just being ready,” sophomore Lena Svanholm said. “Even though we always trying to have our hands up, we’re always ready on our feet, ready to move.”

The efforts resulted in 19 turnovers over the two matchups. Leading the way with three forced turnovers of their own was the aforementioned Mounsey and sophomore Lore Devos.

The mismatch down low has disappeared

Last season, senior Veronika Mirkovic was the predominant starter at the five for the Rams. Newcomer, redshirt senior Tatum Neubert, and Svanholm in her second year are set to take the reigns this year.

Neubert, standing as a 6-foot-2-inch menace inside started both games for the Rams, less than a year after spending a season at the University of Oregon and a trio at Lousiana State University. In her time with the Ducks and Tigers respectively, the big accumulated 62 total games.

Formally of Elizabeth, Colorado, Neubert chose to come home for her final season, bypassing another year down south. Early results are showing that she made the right decision. In the team’s pair of exhibitions, Neubert racked up 25 points and 20 boards, with the latter matchup being a 16 and 14 double-double.

“It feels so good (to be home again),” Neubert said. “My parents are up in the stands, it feels really awesome.”

Off the bench, Svanholm has brought a renewed game this season as well. After competing overseas in the FIBA U20 Women’s European Championship, Svanholm is already seeing the benefits of the increased competition.

“I always think it’s really good to get international experience,” Svanholm said. “(I) came out and played a lot against good competition.”

With the pair of bigs, the Rams increased their depth at the position, as well as the capabilities of their pieces. With premier centers in the conference such as 2018-19 Mountain West All-MW preseason nominee, senior Katie Powell of the University of Nevada-Las Vegas, it will be a welcomed addition.

The Rams begin their regular season Tuesday at Moby Arena against Eastern New Mexico University. The game tips off at 7 p.m.