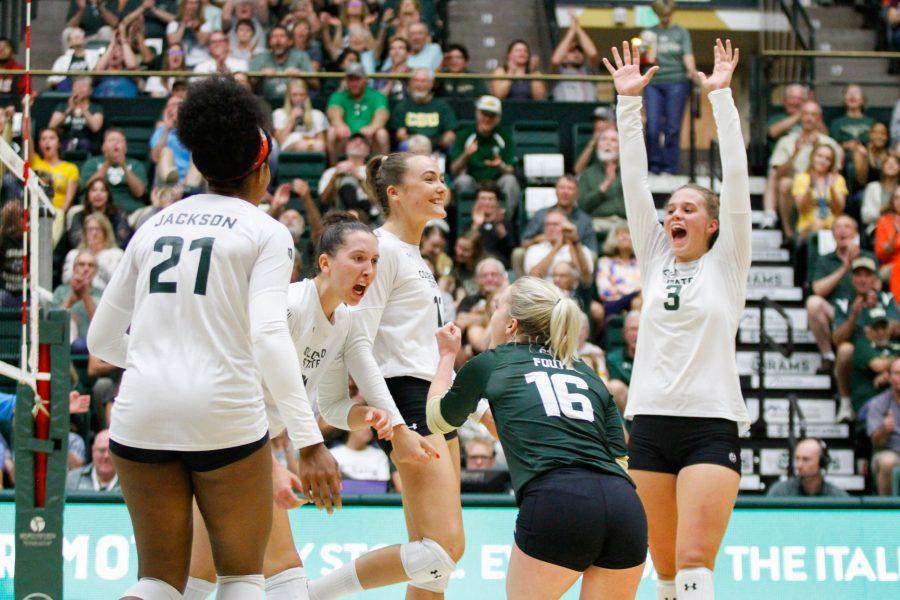 The Rams celebrate after scoring a point during the game against Florida State on Sept. 2, 2018. The Rams won 3-2. (Ashley Potts | Collegian)

In the first game of a three-game road stretch, the Colorado State volleyball team kept on rolling through conference play as the visiting Rams swept the Air Force Academy (25-14, 25-21, 29-27) to earn their thirteenth three-frame match of the season.

The win brought the Rams’ win streak to nine and continued their storied success over the Falcons. In the last 50 matches against the Falcons, the Rams have won all of them, earning a sweep in the last five.

More importantly, CSU built upon its lead in the Mountain West with less than two weeks remaining in the regular season.

“Air Force was playing as well as they can play and we hung with them the entire time in a competitive set. We won it in the end, which what more can you ask from your players – it was a stressful situation, but we weren’t playing poorly, Air Force was just playing well.”Coach Tom Hilbert

The Rams set the tone of the match in the first set, cruising to a 25-14 victory. Coach Tom Hilbert said his team wanted to force the Falcons into a high-error environment and block at the net, to which the Rams responded. The hosts hit a mere zero hitting percentage, due in large part to junior middle blocker, Paulina Hougaard-Jensen. The Denmark native recorded five kills to go along with a perfect hitting percentage in the set.

With the momentum, the Rams jumped out to an early lead in set two, but the Falcons were able to fight back and narrow the scoring gap. Unfortunately for the Falcons, the Rams proved to be too much once again, doubling their kills (20) from set one.

In one of the most competitive matches of the season, the Rams were forced to battle back as the Falcons led the majority of the set. With 11 tie scores and five lead changes, the Rams saw the best version of AFA volleyball.

The Falcons played nearly perfect throughout the set as the Falcons earned more kills and recorded a higher hitting percentage than the Rams, but the conference leaders came out on top to secure the sweep.

“Air Force was playing as well as they can play and we hung with them the entire time in a competitive set. We won it in the end,” Hilbert said. “Which what more can you ask from your players – it was a stressful situation, but we weren’t playing poorly, Air Force was just playing well.”

As it has been all season, various players contributed to the victory. Hougaard-Jensen floored 14 kills, five blocks and a .778 hitting percentage in the match. Redshirt sophomore Breana Runnels and redshirt junior Jessica Jackson were a force at the net adding 11 kills apiece and Katie Oleksak looked the part of conference-leading setter once again, dishing out 44 assists.