3 impressions from the Rams’ second-straight rout 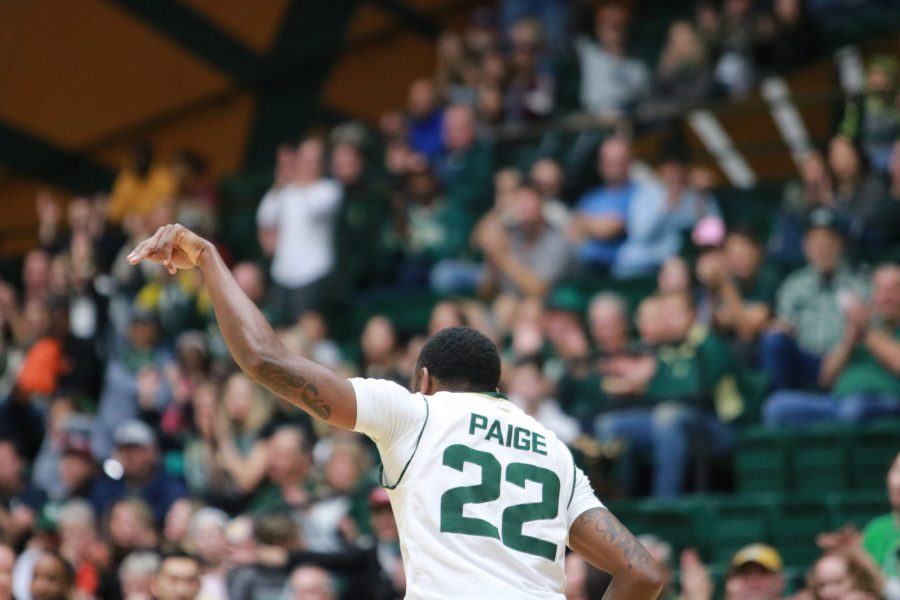 J.D. Paige (22) holds up his shooting arm after knocking down a three. The Rams beat the Golden Lions 92-67. (Devin Cornelius | Collegian)

Serving as the appetizer for a Saturday doubleheader for Colorado State University athletics, men’s basketball began the day in convincing fashion, beating Arkansas-Pine Bluff University for the third time in as many matchups between the two, 92-67.

Fresh off their thrashing of Colorado Christian University, the Rams kept their hot streak from outside going. The offense was aided further with the return of redshirt senior J.D. Paige from his suspension that stemmed from last year. On the year, the Rams have now posted higher point totals in each game than any contest last year.

Now 2-0 on the year, here’s a handful of takeaways from the victory:

In conference play last year, redshirt junior Nico Carvacho averaged a double-double with 11.1 points and 12.4 rebounds per game. The spree has continued into the non-conference portion of the Rams’ 2018 schedule.

Carvacho has a pair of double-doubles in as many contests, averaging 16 points and 13 rebounds per game thus far. The rebounding ways have paid dividends for a Rams’ defense that has limited open looks on the year.

The big man has also made his presence felt on the offensive end, tallying 4.5 offensive rebounds per game in the team’s first two games, a team-high mark. The boards have created multiple long possession opportunities, allowing the Rams to rack up 17 second-chance points per game.

Off of the rebound, Carvacho’s passing game has come to the forefront for the Rams.

“He’s a willing passer,” Coach Niko Medved said. “He’s a kid that you can play through and I think he’ll give it up and (he’s) aggressive and I think that’s great.”

Rams stay hot from outside

In their opening contest of the year, the Rams shot 51.6 percent from outside, a higher mark than any single game last season. The efficiency came on 31 attempts, a feat that only occurred twice last year.

In their latest matchup with the Golden Lions, the Rams continued the run, posting a 52.2 percentage from outside, besting their mark from the opening contest. The tally from outside has come from a reinvigorated passing force from the Rams’ offense.

“I just think it’s sharing the ball,” Medved said. “Guys are moving the ball, they’re making the extra pass, they’re turning down a good shot to get somebody else a great shot.”

Leading the charge from outside was Paige and redshirt junior Anthony Masinton-Bonner with four and three makes from outside respectively. The two combined to shoot 58.3 percent from beyond the arch. For Bonner, the tally comes just a game after the guard posted a team-high six makes from outside.

Discipline is coming in droves for the Rams

Facing a zone defense with full-court pressure at the start, the Rams faced a very different adversary than that of the Cougars. The change was expected given the Golden Lions’ history of straying from man-to-man scheming.

The new look was countered by a cutting game plan set forth by Medved.

Whether it was below the basket, or along the baseline to the corner, the Rams were consistently making their way across the court, setting up passing lanes. The openings allowed the Rams to garner an assist on 11 of their 15 first-half field goals, 21 on 27 field goals in the game’s entirety.

The innovation by Medved’s staff has come on the other side of the court as well.

Against the Cougars, the Rams didn’t commit a single foul in the first half, finishing the game with 10 fouls to the Cougars’ 14. Against the Golden Lions, the Rams once again held the upper hand, forcing 26 fouls while committing a mere 18.

The lack of fouling comes by way of training in practice.

“We practice every single day charges and ‘wall ups’,” Carvacho said. “In the new rules, they’re not calling fouls if you wall up so that’s helping us a lot.”

The Rams will now head into their showdown with Montana State University Wednesday at home. The game is set to tip off at 7 p.m.