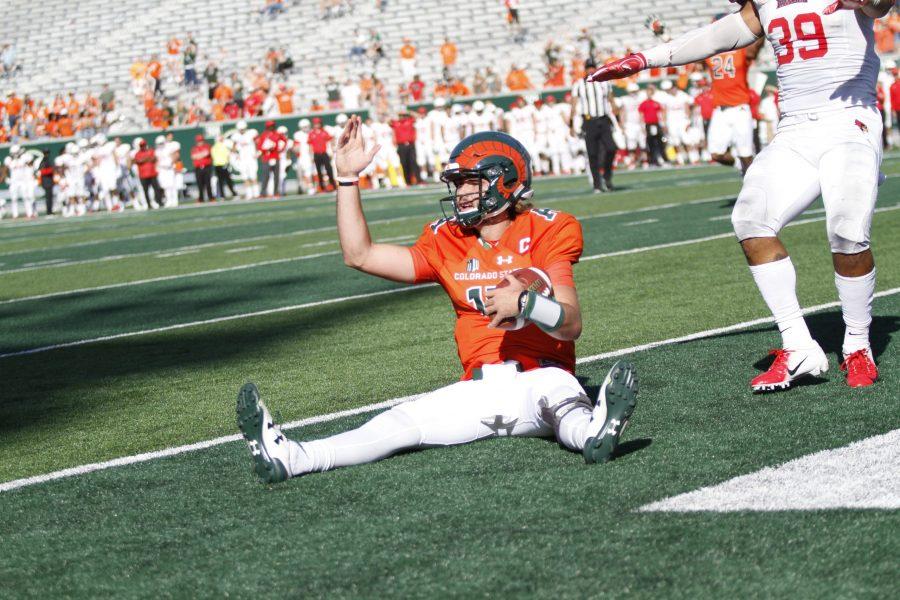 Colin Hill puts his hand up after his attempt at a two point conversion is called off. (Ashley Potts | Collegian)

Colorado State football’s season has come and gone, a mere five games into the 2018 season.

Following a trio of consecutive bowl appearances under Coach Mike Bobo, this year is set the end the streak, in uneventful fashion.

Graduations throughout the offensive line, the loss of their star wide receiver to the NFL Draft and their signal caller becoming an alumnus were set to bring the Rams back to earth after their record-shattering offensive season last year. The results have been worse than expected.

After averaging 34.6 points per game through their first five contests last season, the Rams sit at a lowly 22 this year. The 34.6-point mark last year came despite a three-point showing in the Rocky Mountain Showdown weighing down their five-game average.

The problems on the offensive side have not been offset by a defense which once again has failed to stop a single team this year, allowing nearly 40 points per game and over 500 yards.

With an unexpected win over the University of Arkansas serving as their lone victory, the Rams could have had a 3-2 record in the early going. Instead, they stand at 1-4, effectively ending their season, with the remaining games reigning inconsequential.

The rest of the year, the Rams finish their Mountain West conference slate, playing each team in the conference sans UNLV, Fresno State and San Diego State. The aforementioned Rainbow Warriors of whom the Rams already played will not oppose them either.

In that remaining schedule, a win is hard to find outside of possible victories over San Jose State University and the University New Mexico.

Boise State, Utah State and Wyoming are all near-guaranteed loses.

The weakest of the three, the Wyoming Cowboys, though 2-3, are still untouchable for the Rams. With two of their three losses coming against Power-Five opponents and the other coming to the Boise State Broncos, the Cowboys are a better team than their record indicates.

Led by redshirt freshman Tyler Vander Waal, the Cowboys are set to improve, with Craig Bohl, one of the conference’s best coaches, at the helm.

Utah State, with a lone loss to Michigan State, also poses a near-impossible task for the Rams.

Averaging 51.5 points per game this year, the Aggies will look to shred the Rams’ defense. The Rams allow over 200 yards per game on the ground on average while the Aggies rush for 187 a game. The game will be close for only the early moments, with the Aggies taking the lead and holding it till the final whistle.

The last of the three is a rendition reminiscent of a high schooler bullying a middle schooler.

After blowing their lead last year, the Rams’ fate will be readily apparent early on against Boise State on the road.

The clear favorite in the Mountain West, Boise State, has proven consistently to be one of the top-25 teams in the nation.

As shown by their rout at the hands of the Florida Gators, the Rams succumb rather easily to top competition.

The Broncos will feature yet another top-flight offense opposing the Rams, averaging 43.25 points per game.

The Bronco’s unit is led once again by Brett Rypien, who has thrown for 1389 yards and 12 touchdowns, with nary an interception. The signal caller is also completing over 70 percent of his passes, signaling a rough day ahead for the Rams’ defensive backs.

The burden would be lessened if the secondary had performed this year for the Rams, but they have not. Allowing multiple receivers downfield without opposition has been a thorn in the Rams’ side.

Without much possibility of five more wins this year to make the Rams bowl eligible, their season is all for naught.

A 4-8 finish is a best-case scenario for this Rams’ team, with the defense at an all-time low and the offense beginning to sputter. A quarterback competition is not going to help either.