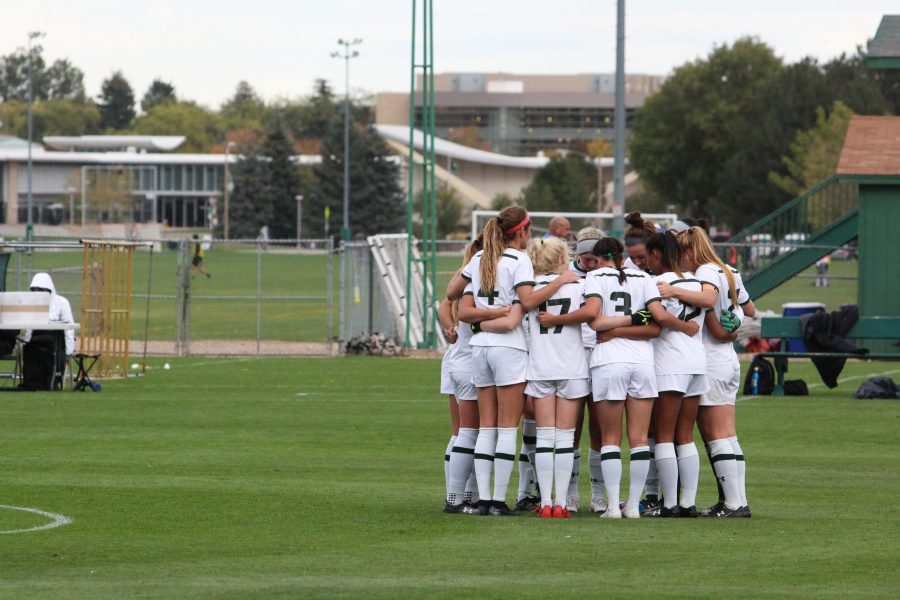 CSU Womens Soccer team gathers before the start of second half during their game against Air Force. (Clara Scholtz | Collegian)

Colorado State University soccer wrapped up their season Oct. 26 in Laramie against the University of Wyoming with a loss. The loss marked the conclusion of the most successful season in the program’s history.

This year, the Rams set a new program high in overall wins, with six, setting a program-best conference record to boot.

At first glance, the numbers show how much better this team was than the teams of the past, but the reality is this team was a few goals away from making the playoffs for the first time in history.

If the Rams had scored a single goal against Colorado College, San Diego State University, and the Cowgirls, they would have made the conference tournament.

The Rams were lead all year by redshirt junior goalkeeper Hunter Peifer, whose efforts are a large reason the Rams were three goals away from the tournament. Peifer set program highs for shutouts with seven. Peifer made some incredible saves, but she also served as a leader for the entire defense.

“Our seniors laid a new standard for the groups coming in after them. They’ll be sorely missed, that’s for sure.”Coach Bill Hempen

Peifer’s ability to control the flow of the game in her zone is something that the Rams will be searching for next year.

In addition to Peifer, the Rams will lose seniors Kaija Ornes, Hannah Gerdin, Beth Plentl, Lexi Swenson, Makenzi Taylor and Madisann Relph. The group of seven seniors started a combined 84 games and played a total of over 7,400 minutes.

Their production will be missed in all facets of the game, along with their leadership.

“Our seniors laid a new standard for the groups coming in after them,” Coach Bill Hempen said. “They’ll be sorely missed, that’s for sure.”

The Rams hopes of being a good defensive team again next year will be helped by junior defender Halley Havlicek and sophomore defender Lauren Jones, returning to help anchor the defense.

Freshman Gabbi McDonald, who started in two games while Peifer was out with injury, looks to be the leader for the Rams as starting goalkeeper next year. She will have some tough shoes to fill if the Rams are to be relevant again next year.

Along those same lines, if the Rams want to make another leap in the standings next year, sophomores Ally Murphy-Pauletto, Taylor Steinke and Karli Eheart will need to improve on their ability to finish their scoring opportunities.

In the team’s 19 games, the offense mustered a mere 10 goals, less than one per game. Capitalizing on missed opportunities and putting the ball in the net will be crucial next year with the loss of so many seniors.

The Rams will also look to junior midfielder Caeley Lordemann to build on her program record-tying five goals. Lordemann will also need to continue to remain on the field the way she did this season on her way to playing a team-high 1,761 minutes.

The Rams have the potential to continue to move up in the standings next year. The ability to score goals as well as finding a replacement for Peifer will be the two biggest problems facing the Rams this offseason.

Adam Williams can be reached at spors@collegian.com or on Twitter @AdamJ_Williams.