Sports for Dummies: Volleyball terms you may have missed 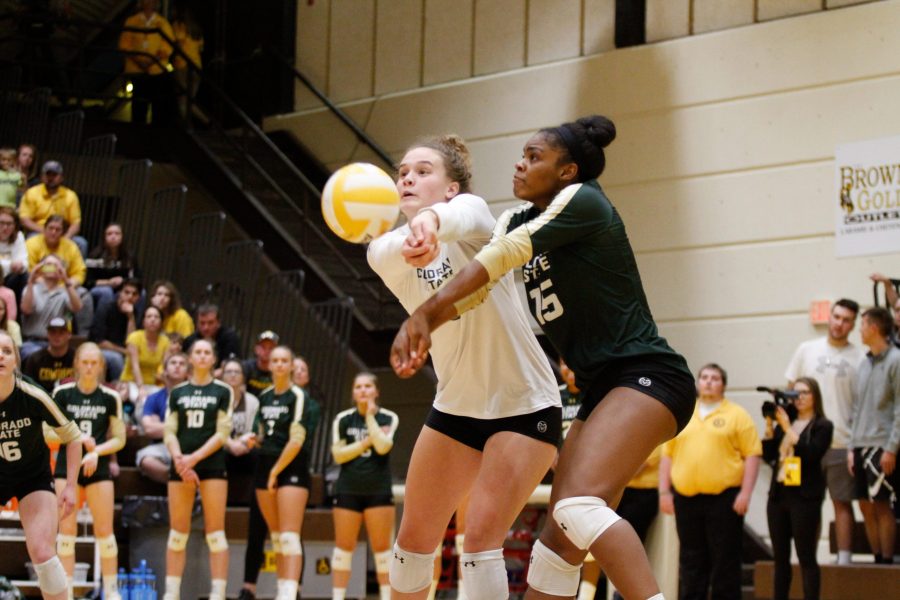 Olivia Nicholson and Breana Runnels both attempt to dig a ball during the game against Wyoming. (Ashley Potts | Collegian)

Volleyball is a fast-paced sport. It is fun to watch, but there is a lot that can get lost in the shuffle. When a team is as good as the Colorado State University volleyball team, you can get whiplash trying to keep up. If you want to support the Rams but are not sure of the specifics, here are some terms to know before the next game.

An ace is just a serve that hits the ground on the opposing side of the net without anyone touching or successfully passing it. This is a sign that a player is really good at aiming, or that the other team suffered a bad read. It is essentially a volleyball “gotcha” and is always cause for celebration. Many teams have cheers they do when one of their teammates gets an ace. CSU usually cheers and jumps up, clicking their heels together.

This is a foul call most often called on the setter. This is sort of a hard one to explain, not because it is complicated, but because it is something you have to visualize. Setters work really hard to just use their fingers to move the ball the way they want it and to only touch the ball quickly and redirect it fast. The carrying or lifting gets called when the ball stays on the player’s fingers or palms for too long or comes back down with their hands as they attempt to hit it back up.

The libero is a player who specializes in defense. They are the player that wears the opposite color jersey during games. This is to identify them to the refs, as they can substitute in and out without having to stop the game and get checked by the officials. They will, more often than not, switch places with the middle blocker as they come to the back row in their rotation, but they can switch with any back row player to get into defensive position. They cannot block or attack the ball from the back row, however, unless it is below the net height, at which point they would just pass it.

Speaking of attacking from the back row, this is another thing players can get called for. They are allowed to hit from the back row, but they must jump before they reach the 10-foot line. They can land in front of the line after their hit, but, if they jump from the front row, they will be called for it and a point will be awarded to the other team. Though it does not happen very often, hitting from the back row is not ideal. When it does happen the players are normally aware of their position on the court. Redshirt sophomore Breana Runnels has had some strong hits from the back row in her career.

Ashley Potts can be reached at sports@collegian.com and on Twitter @ashleypotts09.