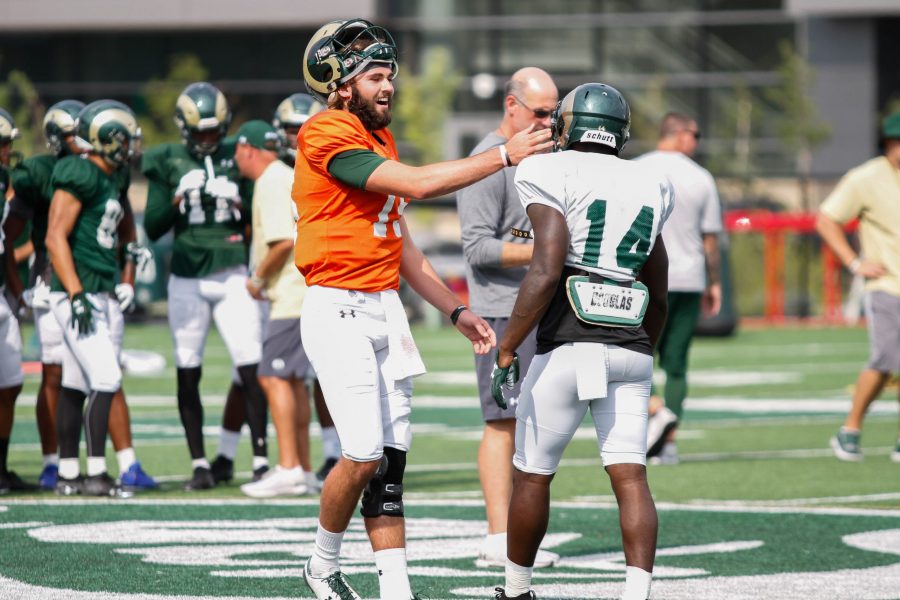 Collin Hill jokes around with Anthony Hawkins in between drills at practice on August 2. (Ashley Potts | Collegian)

Happy Halloween, sports dummies. You might be wondering: What do sports and Halloween have to do with each other? Well, athletes and sports fans might be some of the most superstitious people on the planet.

No, they are not worried about black cats and broken mirrors but about luck and winning. People would do anything to avoid jinxing the luck of their team. They range from personal quirks to full-on sports world weirdness.

Some simple ones include things like soccer players stepping onto the pitch right foot first, never saying that someone is having a perfect game and wearing the same shirt or shorts or socks while on a hot streak.

Stepping right foot first, while it in no way actually helps performance, is innocent enough. Not saying that you or a teammate is having a perfect game makes a little sense. Of course, as soon as it gets pointed out, it would end. Wearing the same clothes over and over until the “luck wears off” makes a little bit of sense, but gets gross pretty fast.

Re-wearing clothes seems to be the most popular superstition, so much so that it is kind of cliche. But, it is very real.

Professional athletes like Sidney Crosby and Serena Williams do this regularly. Crosby will wear the same hat pre- and post-game all season until it is nasty, sweaty and falling apart, but he is not the only one. Williams wears the same socks during the extent of tournaments, luckily not extending this stench for nine months like Crosby.

Some superstitions get weird though and generally do not make much sense.

The most popular ones include the “Madden Curse,” in which football players who get put on the cover of the yearly iteration of the popular video game suddenly get a stroke of bad luck. This has included players performing poorly or getting injured after being featured.

This curse is definitely iffy, but nonetheless popular enough that Electronic Arts, the company behind the “Madden” series, itself has come out to say it is not a thing. A similar superstition exists around being featured on the cover of Sports Illustrated magazine, though the Chicago Cubs broke a very, very long curse after being featured on the cover of SI, dismantling that theory.

Another incredibly weird and very popular one is the playoff beard. This is the notion that once your team has made the playoffs, facial hair becomes very important. “It now holds some luck that it did not for the whole season leading up to playoffs, and you can’t shave it until your team is eliminated.

This leads to some very hairy champions lifting trophies at the end of a season.

In all honesty, a lot of this seems more like “boy’s club” things than actual witchcraft or jinxes. Women’s sports do not seem to have as deep of superstitions like a Madden Curse or playoff beards. I am sure they have superstitions or things they do for good luck before games. Maybe we just are not as aware of them because women’s sports are not as talked about. That is a spooky thought in itself.