Rams rout Aztecs at home, set up showdown against Bulldogs 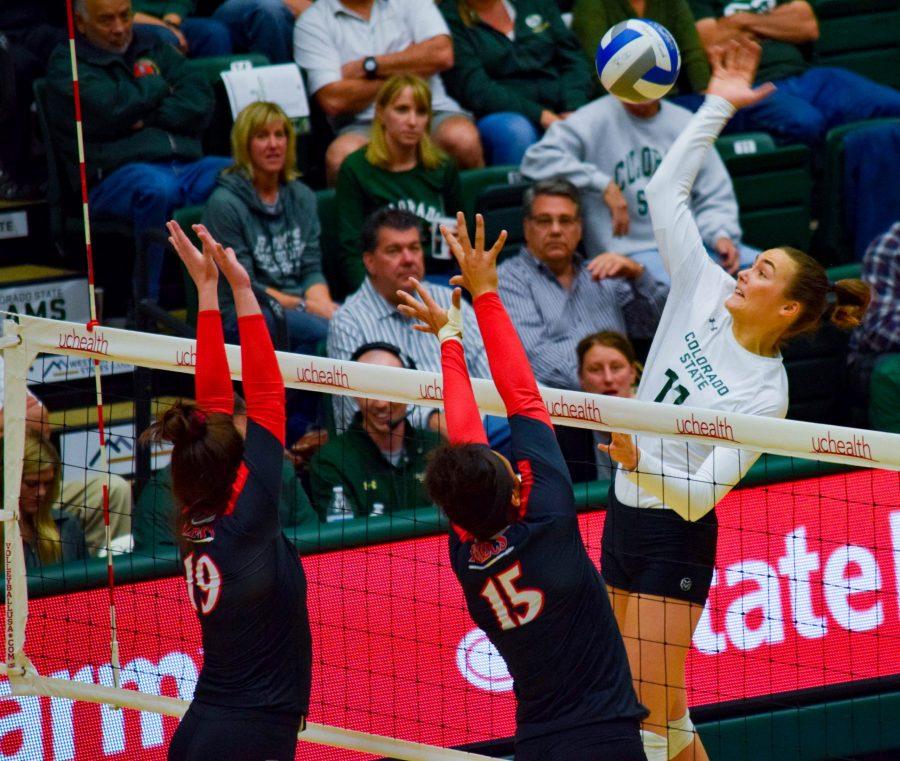 Things got off to a quick start for Colorado State on Thursday night and ended almost as quickly as the Rams put together one of their most lopsided wins of the season (25-9, 25-11, 25-18).

San Diego State University was under fire early from a Rams’ offense that has been clicking over the last six games. The Rams again garnered a lot of offensive production from their middle blockers and appeared more in sync than the Aztecs.

“They were out of sorts,” Coach Tom Hilbert said. “They beat Wyoming at home. They’re a much different team in San Diego. They’re physically talented, but when we started getting after them, really put pressure on them and disrupted them as much as we did in the serving part, they just sort of lost their will a little bit.”

The first set started off in a bit of a back and forth, but the Rams scored ten of 12 points in a dominant stretch to elevate their lead to 16-5 behind freshman Sasha Colombo and junior Paulina Hougaard-Jensen. Colombo had a perfect hitting percentage in the first set, with the frame ending on a redshirt junior Kirstie Hillyer block, the only block of the set for the Rams.

“She’s awesome to play with,” Hougaard-Jensen said. “She always hits as hard as she can and then when she gets a kill she’s just super excited, so it’s really fun… Oleksak started off by setting Sasha behind and to the outside so they middle kind of went that way so it opened up for (Hillyer) and I.”

The second set featured more of a power game, with Hougaard Jensen and Hillyer keying the set. Hillyer simply overpowered the Aztecs, sending kills past Aztec defenders without being touched. Proving a little tricky, Hillyer capped the set with a soft drop into the middle of the court that had the entire Aztecs team diving to the floor and coming up with nothing.

Hillyer and Hougaard-Jensen’s play was big all night, helping the Rams keep their strong stretch going and helping fellow junior Katie Oleksak to 41 assists. The setter pushed her lead in further in the conference in assists per set.

The hitters and setter alike voiced their biggest advantage in the match, communcation.

“A lot of the communication helps me hear where they are and adjusting to that,” Oleksak said. “That’s one way that I can feel where, like, Paulina is when I’m setting a slide. So if (the other team is) not talking, it’s really crucial to me because that connection won’t be there and I think that’s a little bit of what happened on San Diego State’s side.”

The final set was the most competitive for the Rams as the brought in the subs. It seemed like the Aztecs had finally started to settle into the environment of Moby Arena after players had almost run into each other multiple times in the first couple of sets. It was a competitive set until about midway through as redshirt sophomore Breana Runnels and Aztec’ errors keyed a run that the visitors could not come back from.

The Rams will play next against first-place Fresno State University on Saturday. The match provides the Rams a chance to move back atop the standings after early struggles.