Herz: Get used to Colorado State’s improved defense, it is here to stay 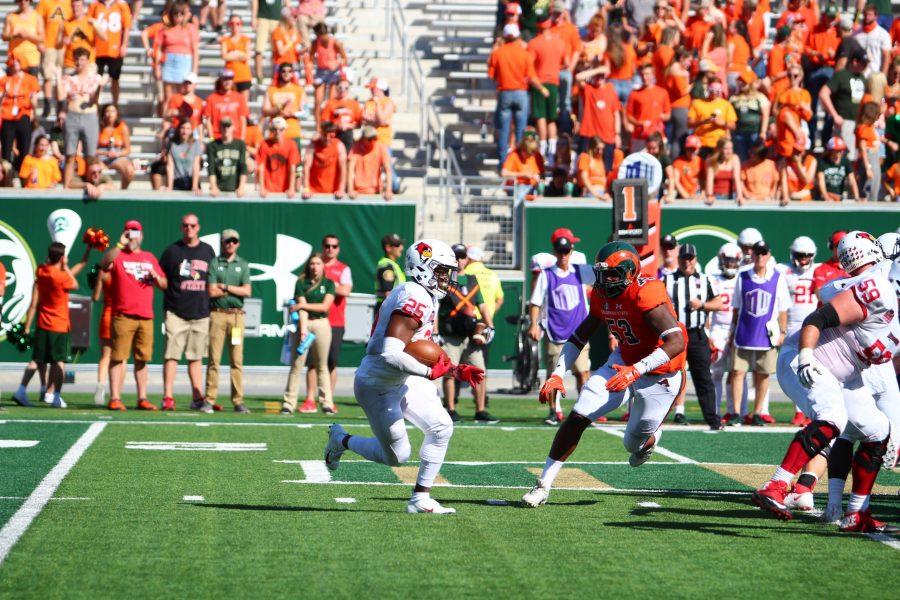 Caleb Smith (53) passes the Illinois State defensive line and runs after the quarterback during the game on Sept. 22nd. The Rams lost 19-35. (Matt Begeman | Collegian)

Other than the fact that no field goal is a guarantee, Colorado State’s homecoming victory over the University of New Mexico taught us that the teams’ defensive improvements are not temporary.

The Rams’ defense has looked like a completely different unit when comparing their last pair of games to their first five. Though the sample size of quality is smaller, it is clear to me that the Rams’ early-season defense is a thing of the past.

The numbers in favor of the change are remarkable.

CSU allowed an average of 39.6 points per games through its fifth game of the season. That includes three games in which the Rams allowed more than 43 points.

At first glance, it does not appear that CSU had anything to be proud of defensively against San Jose State University last week. The Rams allowed 30 points in what became a shootout against the Spartans.

But all 30 of those points came in the third quarter. Besides that temporary blip, seven of CSU’s last eight quarters have exhibited an effective defense.

The teams’ defensive improvements came to to the forefront against UNM. CSU allowed only 18 points, the least it has allowed in a game since the University of Wyoming scored 16 in the Border War last year.

The Lobos entered the game averaging 42.2 points per game, the 17th-best scoring offense in the FBS.

Additionally, the Rams held each of their previous two opponents under 300 total yards. The last time CSU did so in non-consecutive fashion was when aforementioned Wyoming amassed 294 yards in that same matchup.

To preface, it has to be taken into account that transitioning to a new defensive scheme is difficult for a unit.

First-year Defensive Coordinator John Jancek implemented a 4-3 defense prior to the season. The Rams had been operating under a 3-4 for quite some time prior to his inception.

Growing pains were unavoidable, the question was whether or not CSU would get over the hump. It appears they have.

“We are just getting used to the system,” junior safety Jamal Hicks said. “It’s a new system that we just learned, that plays a big part. And we just started practicing way harder. (Coach) Jancek started preaching about changing the culture and I see a change, everything is going better right now.”

The emergence of players who were not expected to fill impact roles prior to the year gives reason to be optimistic as well.

After rarely playing over the past three seasons, Smith has recorded seven total tackles in two of the Rams’ last three games. Smith highlights CSU’s brilliant defensive display against the Lobos on Saturday.

The defensive lineman forced a fumble on the second play from scrimmage which eventually turned into six points for the Rams a mere two plays later.

Besides “new” players making an impact, it seems returning Rams who have had to step into unfamiliar roles this season are finally getting adjusted.

Through the first five games, this identity was nowhere to be found. Currently, CSU’s defense is undoubtedly aware of their new status and comfortable with who they are.