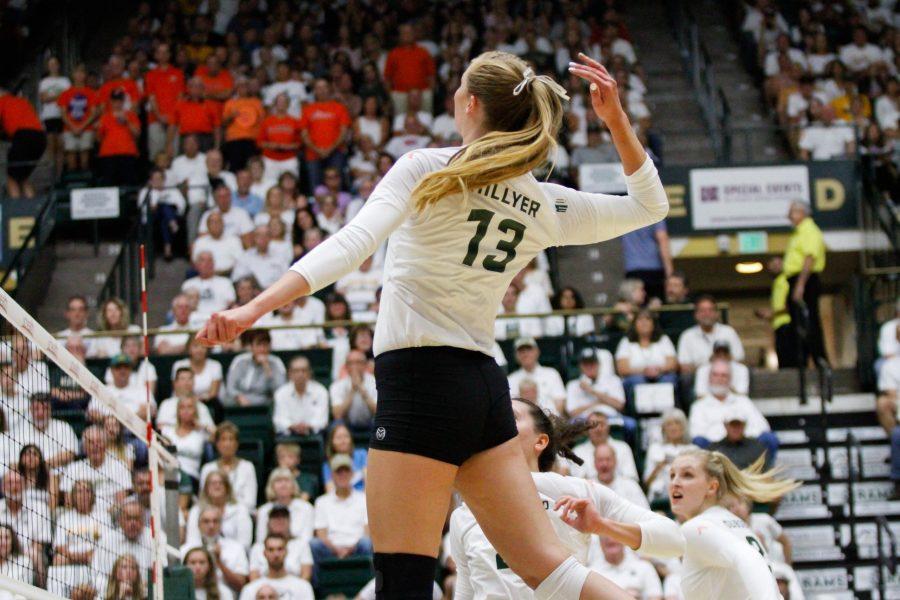 Kirstie Hillyer hits during the home opener against Illinois. After an intense game, the Rams lost in the fifth set. (Ashley Potts | Collegian)

Returning to Fort Collins, Colorado State volleyball hosted a welcome-back party, breaking out the brooms in a sweep of the Air Force Academy (25-18, 25-14, 25-18).

Coming into the match, the Falcons were holding opponents to a .168 hitting percentage with a similar .178 in conference games. The Rams sought to change that.

Led by redshirt junior Kirstie Hillyer, the Rams’ offense found a rhythm early. Battling for a team lead in kills for the year, she struck a .417 percentage in the opening set, only bested by redshirt sophomore Breana Runnels (.600). The two have lobbied back and forth for the team-lead throughout the year.

Prior to their return to Moby Arena, the Rams had lost two conference matches in a row on the road for the first time in over a decade.

“(The players) want to play well (at home),” Hilbert said. “Losing two matches in a row is not fun. I think it got my attention, I’m pretty sure it got the players’ attention, they know we have to be better.”

The 6-foot-6-inch Hillyer was the tallest player on either roster and took advantage of it. The Bayfield, Colorado native tallied seven kills in the first set alone. The total already rivaled her final allotment against the University of Wyoming where she had 10.

Following the lead of their middle blocker, the Rams’ first set victory was one in which they led for its entirety.

Midway through the first set, the match turned sour with Falcons’ junior Denise Ssozi turning her ankle of the foot of Hillyer. The crowd deadened as the team’s leading hitter coming into the match was carried off the floor. The outside hitter exited without a kill on six attempts.

The loss of Ssozi served as a catalyst for the Falcons’ misfortunes as their already stymied offense went quiet. A focus prior to the match, the loss of Ssozi gave the Rams an advantage.

The changes came seamlessly for the home team as they cruised to a second set win as well. A revived offense was the theme of the frame as a .357 hitting percentage gave flashbacks of last years’ attack. Losing Jasmine Hanna and Sanja Cizmic has shown for much of the year, but the Rams mitigated the losses in their sixth conference match of the year.

Not to be outdone, Runnels garnered 13 kills in the final two sets to retake the match lead.

“We both want to do the best that we can at our position,” Hillyer said. “When we go out on the court, we do what we can.”

Unfortunately for the visitors, their offense sputtered to a .072 hitting percentage in the match. The Rams’ blocking force, with juniors Paulina Hougaard-Jensen and Katie Oleskak at the forefront, comprised 11 rejections in the match.

Leaders are beginning to enter the limelight for the Rams in the form of Hillyer and Runnels. Both keys to success last year, the duo is beginning to pull away in kills, much the same way Hanna and Runnels did last year.

“Everybody has to be a leader in their own way,” Runnels said. “Tonight, (Kirstie and I) showed we could lead at the net.”

The Rams also once again welcomed junior Olivia Nicholson to the lineup at libero. With fellow junior Amanda Young still out, Nicholson has added a new dimension to the Rams’ lineup in the form of setting from a defensive position.

A switch in libero due to injury has given the hitters added confidence.

“Olivia has great hands,” Runnels said. “I feel like we have a good relationship so she kind of knows where to put it for me and I’m gonna go up and put up a hard swing.”