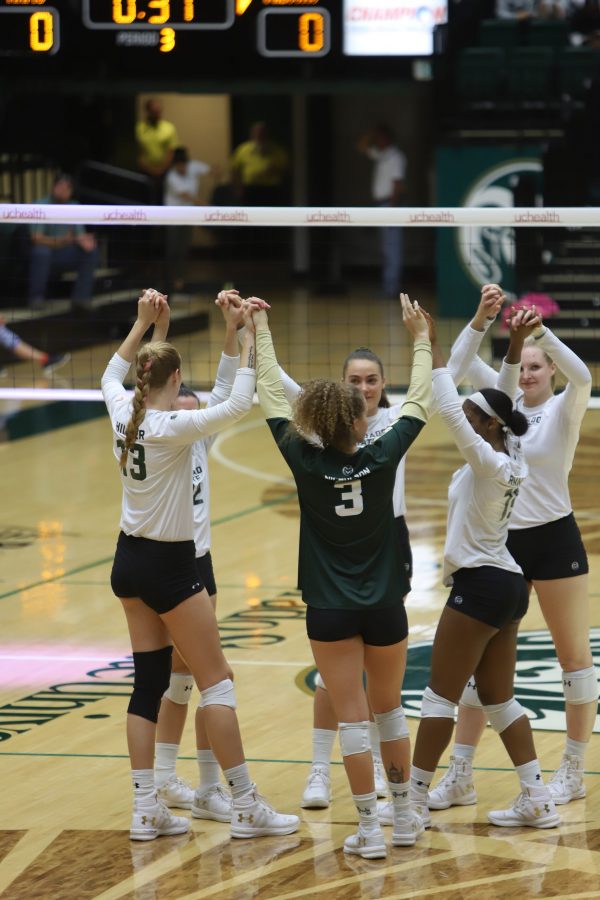 Winning is always good, but five-game winning streaks are even better.

The longest winning streak of the season for Colorado State volleyball comes right in the midst of a competitive Mountain West Conference season. The Rams knocked off a pair of conference foes in the University of New Mexico and University of Nevada, Las Vegas Oct. 18 and 20.

In Albuquerque, New Mexico, the Rams continued their storied-dominance over the Lobos by increasing their winning streak to 12 straight in a sweep (25-16, 25-16,25-15).

Junior defensive specialist Amanda Young made her return to the lineup for the Rams and posted a vintage performance, digging nine balls in the match.

But the story of the match was at front of the net. CSU out-blocked UNM 13 to four. Coach Tom Hilbert credits the duo of junior Katie Oleksak and redshirt junior Kirstie Hillyer’s blocking throughout the game.

“We blocked the people we needed to block early and it created some hitting error situations for New Mexico,” Hilbert said.

The lack of comfort created 24 errors in the match for the hosts.

A follow up to a breakout season continued for CSU redshirt sophomore Breana Runnels in the match as she flexed her might with 18 kills on a .371 hitting percentage. The play of the former Mountain West Newcomer of the Year is something Hilbert has emphasized as a key for the team’s chances for the rest of the year.

The Rams’ victory snapped a nine-match home winning streak dating back to the season opener for the hometown Rebels.

In several key losses this season, the Rams started slow in the opening set and were forced to dig out of a hole from the early going, which Hilbert attributes to a bit of a “shock” factor.

“What is happening is we play these good teams on the road and we kind of get shocked on how good they are,” Hilbert said. “It always reflects in our serve and pass game because we get uncomfortable.”

Against the Rebels, the Rams found a way to overcome their opening set woes by settling down and getting physical.

CSU capped off the next proceeding three sets after an opening frame loss with better blocking and service pressure. The increased pressure from the Rams led to 25 errors by the Rebels, resulting in a .154 hitting percentage in the match.

The Rams totaled 12 blocks led by Hillyer and junior Paulina Hougaard-Jensen with six apiece, all while holding the hosts to five.

2017 Mountain West Player of the Year, Oleksak, recorded 41 assists, nine digs and three aces in the victory. The trio of aces served as a season-high for the third-year setter.

CSU (16-6, 8-2) moves to second place in the Mountain West standings, trailing Fresno State University by half of a game. The Rams will have three-straight home games starting Oct. 25 with one of the three matches against the conference-leading Bulldogs.