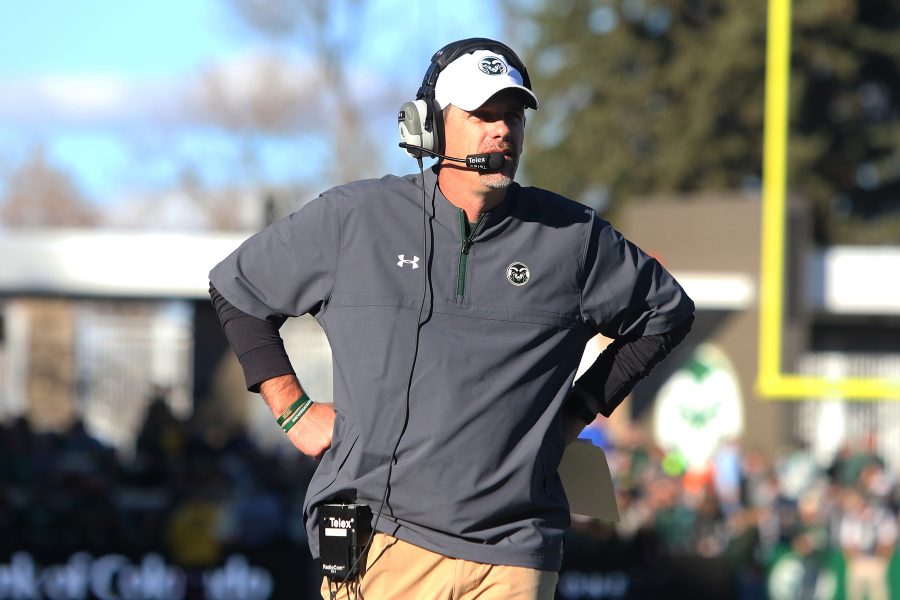 Head coach Mike Bobo gazes on the field after another Air Force touchdown that sealed the victory over the Rams 28-45. (Javon Harris | Collegian)

The Colorado State Rams were run off the acclaimed blue turf of Albertsons Stadium under the lights on Friday night as the Boise State University Broncos coasted to a 56-28 victory.

After winning two consecutive games heading into Boise, Idaho, morale was high in CSU’s locker room leading up to the game. The sense of positive energy and confidence faded shortly after opening kickoff.

“We thought we had a pretty good defensive scheme coming into the game,” redshirt senior Jordan Fogal said. “It’s obviously frustrating going from the performances we had in the past couple of weeks to this.”

BSU’s offense came out hot and needed little time to find a way to effectively move the ball down the field. Their offense collected two first downs on as many plays to begin the game.

Rypien ripped through CSU’s 4-3 defensive scheme all night long. The senior quarterback, who was the preseason selection for Mountain West Offensive Player of the Year honors, finished the game with 308 yards through the air and four touchdowns.

On the opposite side, redshirt senior K.J. Carta-Samuels struggled on CSU’s first offensive drive, a recurring theme on the night.

Rypien then connected with Richardson again for a 35-yard score. Suddenly, CSU found themselves in a two-touchdown first quarter hole that extended as the opening half progressed.

After their second-straight unsuccessful drive, sophomore punter Ryan Stonehouse booted the ball away once again.

Fogal forced a key, potential momentum-building, fumble during the punt return. The hope was thwarted as BSU sophomore Kekaula Kaniho alertly scooped up the ball and sprinted 42 yards for a touchdown as the clock struck zero in the quarter.

Carta-Samuels briefly found his rhythm in the second quarter with the Rams trailing 28-0 as CSU drove the ball within BSU’s 15-yard line. But, Carta-Samuels released an errant pass into the hands of a BSU defender while receiving pressure from the hosts’ pass rush yet again.

The visitors ended the half on a lone positive note when Carta-Samuels connected with junior receiver Preston Williams for a 47-yard score. The hopes of an upset took a step back as CSU headed into halftime facing an early 35-7 deficit.

“There was a lot of pressure (from an early deficit),” sophomore Warren Jackson said. “Obviously, our goal was to score points that’s what we tried to do.”

Carta-Samuels went 11-17 through the air for 176 yards, one touchdown and two interceptions in the first half.

The Washington transfer led the CSU offense to seven points on the second possession of the second half as well. Jackson was the beneficiary with an eight-yard, juggling catch to cut the deficit to 35-14. The deficit, though lessened, never came within striking distance.

Carta-Samuels finished the game with 238 yards, and a pair of touchdowns with two interceptions as well. Backup signal-caller, redshirt sophomore Collin Hill was able to log playing time once again for CSU as the fourth quarter came to fruition.

Hill entered the game in the final frame for Carta-Samuels with the Rams trailing 49-14. The sophomore completed all seven passes on his first possession for 83 yards and a touchdown.

Overall, Hill threw for 135 yards and one touchdown with only two incompletions on 14 attempts.

Richardson, the aforementioned BSU receiver set a career-high with 137 receiving yards and a pair of touchdowns. The CSU defense allowed 472 total yards and a season-high 56 points.

“I knew if we didn’t give (Rypien) some different looks then he was going to have a chance to pick us apart,” Bobo said. “You have to give (Boise State) credit, they’re breaking tackles and making plays.”

The BSU defense began the game ranked 24th in the FBS with an average of 324 yards allowed per game. CSU’s offense combined for 489 total yards but committed three turnovers in the game.

Senior running back Izzy Matthews rushed for over 100 yards for the second time in three games. Matthews collected 109 yards and plunged through for a touchdown as well.

Jackson totalled a career-high 105 receiving yards and also reached the end zone twice with fellow wideout Williams continuing his dominance in the receiving game as well. The Tennessee transfer made nine receptions for 154 yards and one touchdown.

The Rams will pick up the action Oct.26 in the Border War against the University of Wyoming at 6:00 p.m. at Canvas Stadium.

“We’ll find something to fix and then we’ll go out and beat the Cowboys next week,” sophomore Ellison Hubbard said.

Eddie Herz is a reporter for the Collegian and can be reached at sports@collegian.com or on Twitter @Eddie_Herz.