Santistevan: 5 athletes sure to terrify the opposition 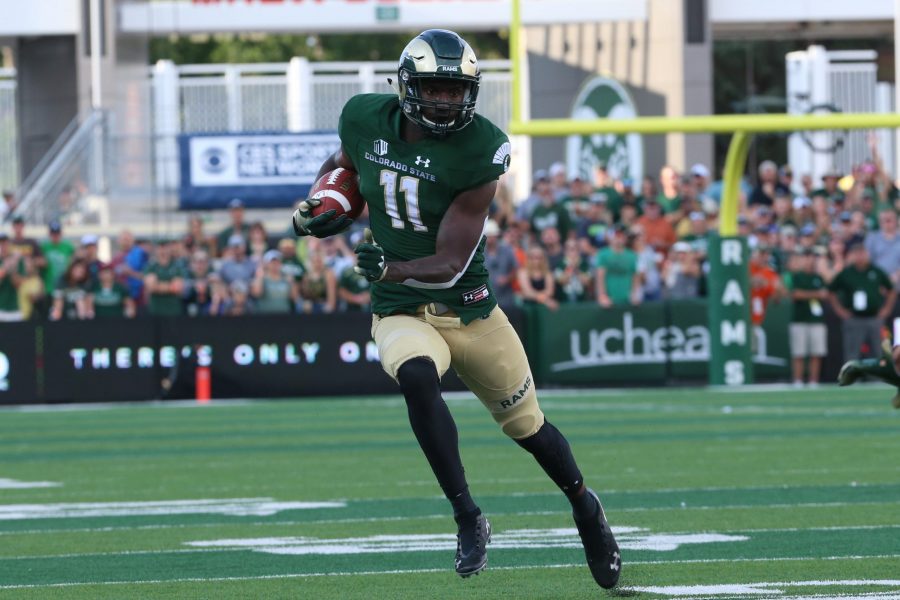 Wide Receiver Preston Williams runs up field after making a catch against the Hawaii State Warriors in the first quarter of play at Canvas Stadium on August 25, 2018 in Fort Collins, CO. (Elliott Jerge | Collegian)

Athletes come in different shapes and sizes. Some also demonstrate durability, leadership and toughness. But, there is one quality that makes an athlete stand out from the rest: intimidation.

Intimidation is the ability to frighten and put fear into the opponent before the game ever takes place. It makes coaches lose sleep from game planning all week.

To celebrate Halloween, here’s a list at the scariest athletes that dawn the green and gold:

The 6-foot-2-inch senior middle linebacker is the leader of the Colorado State defense and a team captain. The backer has played in every game since his redshirt freshmen season and is a force in the middle, recording a team-high 109 tackles last season.

Using his size and aggression, Josh Watson is the definition of “scary” as the heavy-hitter is on track to become one of the Rams’ all-time-great linebackers. Look for Watson to follow the path of Rams alumni Shaquil Barrett and Cory James as the next Ram linebacker to hear their name in the NFL Draft.

Sometimes a player’s size alone can intimidate an opposing team, and that’s what the Rams’ redshirt Kirstie Hillyer does.

Measuring in at 6’6″, Hillyer has the size to scare anybody on the court and change an entire team’s mindset at the net. As one of the Mountain West Conference’s best players, Hillyer ranked 17th in the nation last season in blocks.

In back-to-back weeks, the Mountain West recognized Hillyer as defensive and offensive player of the week, respectively. Using her size to her advantage, she recorded 20 kills and 7 blocks in total last week.

Much like Hillyer, Nico Carvacho uses his near 7-foot frame to lock down defenders. His physique helps the Rams basketball team match up with any opponent in the paint.

Besides his physical stature, Carvacho is a matchup nightmare.

The redshirt freshman has the ability to force defenders out onto the wing and space the floor. Carvacho averaged a double-double in Mountain West Conference play last season. The modern-day big man also earned Honorable Mention All-Mountain West last season, but with two seasons remaining on his eligibility, look for the left-hander to make waves in the upcoming season.

A perfect combination of size, physique and athleticism, Preston Williams is an offensive force.

Williams is more a “freak” than anything with a 6-foot-4-inch, 210-pound stature. The Rams’ wide receiver has the ability to jump up and grab any ball in his vicinity. At already 951 yards receiving with three games remaining, Williams is making a case to not only be one of the Mountain West’s best but the nation’s best.

As an All-Mountain West player, Williams is a nightmare matchup for most cornerbacks. Williams is one of scariest athletes at CSU for a variety of reasons, which is why he will likely see time on Sundays.

All the athletes listed above stand out from a normal crowd, but redshirt sophomore Breana Runnels is different.

Runnels is not going to intimidate opponents with her overtly aggressive play, physical presence or size. Instead, the outside hitter is a force to be reckoned with when she goes up in the air.

Second in the Mountain West in both kills and points, Runnels intimidates opponents based solely on her athleticism. Her kills, often times unhittable, make a whole team focus on limiting her attack.

One of the most explosive players in the Mountain West is making an early run for Player of the Year, just a year after taking home MW Newcomer of the Year.