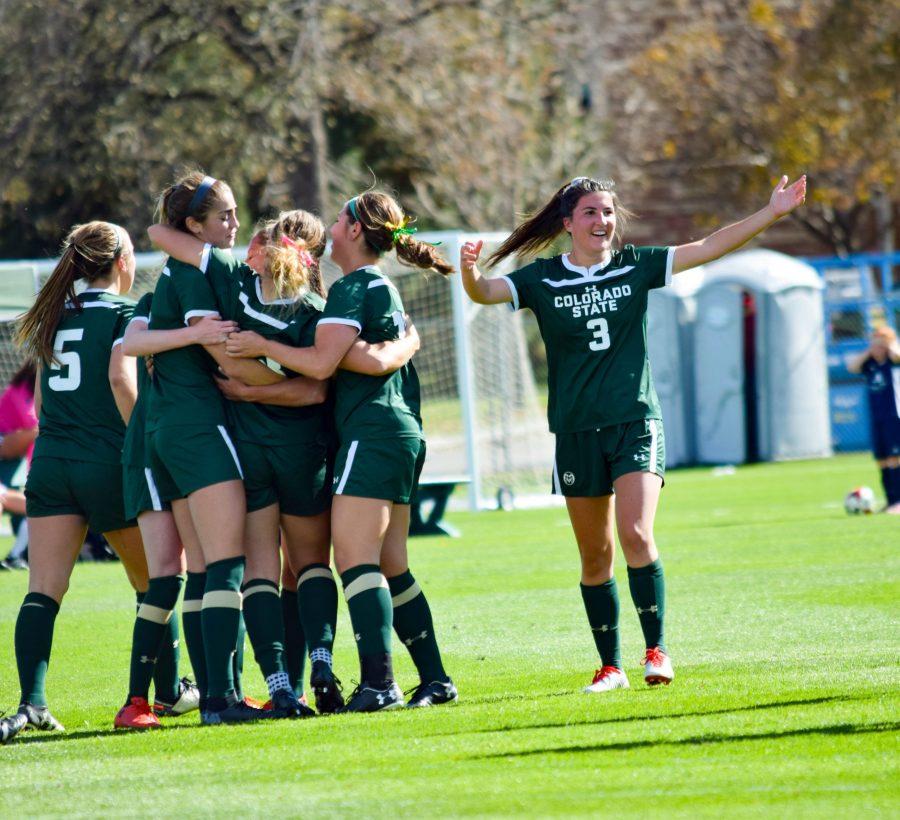 Makenzi Taylor welcomes a fellow team member to the celebration after the game-winning goal scored by Caeley Lordemann on October 21, 2018. (Alyse Oxenford | Collegian)

Colorado State University took on the University of Nevada, Las Vegas at home on Friday in a late-season match that determined who would likely make the conference tournament.

The Rams were aggressive early, pushing the UNLV defense hard in the opening five minutes. The pressure lead to a shot from senior Kaija Ornes from just outside the box that was contested by UNLV, resulting in a penalty.

Ornes lined up for a penalty kick. The shot went into a wall of UNLV defenders, but the Rams’ offense stay consistent and continued to apply pressure.

“Right out of the gate I thought we were buzzing,” Coach Bill Hempen said. “We get a really clear chance early and we miss.”

Coming out of the half, the opening five minutes showed a reversal in course as the action was brought to the Rams’ defense.

Kingman was set up by her teammate, redshirt junior Michaela Morris, who looked poised to fire a shot. Morris passed up the opportunity, placing the ball onus on Kingman’s foot. The misdirect caused redshirt junior goalkeeper Hunter Peifer to lean wayward enough for Kingman to bury it in the net.

UNLV would not stop there.

Just 14 minutes later, UNLV senior Caitlyn Kreutz was able to score after teammate, junior Katie Ballou outran her defender and fell prior to getting a shot off. The ball rolled to Kreutz, who was able to catch Peifer leaning once again, opening the net once again.

“Defensively we gave it our best effort (and) I don’t think it was anything we weren’t prepared for.”Sophomore Lauren Jones

Fellow UNLV junior McKenna Sullivan put the finishing touch on the offensive outburst in the 77th minute when she scored on a penalty kick that sealed the fate of the game and the season.

Hempen waived the white flag and substituted goalkeeper Gabbi McDonald soon after, allowing the freshman to garner playing time prior to their final home match of the year.

“We had our chances it’s just a matter of finishing them,” junior Caeley Lordemann said.

The Rams’ leader saw the difficulty in the team’s comeback efforts as well.

“You give up that goal and another shortly after and now it’s an uphill battle for a team that can’t seem to get one,” Coach Hempen said.

The Rams looked to rebound on Sunday against the University of Nevada. The contest was the last home game of the season for the Rams, who despite their loss earlier in the weekend were energized for the match that also served as senior day.

Starting much the same as their match against UNLV, the Rams took to a ball-control game plan.

For the majority of the game, the plot remained the same for the Rams as they would pressure and generate chances but could not find a goal.

Ornes attempted to break the tie but narrowly missed, her second close miss of the weekend.

Merely 11 minutes later, the outlook restructured. In the 88th minute of the game, Lordemann was able to curve her shot around the UN keeper for the game-winning goal.

Lordemann had been close all year, much the same way her teammates had been, but she found a way to lift the Rams to a victory in the waning moments.

“We’ve been in search of moments like that all year long, and (Lordemann) just buried it,” Coach Hempen said.

The game served as the final game in Fort Collins for six separate Rams’ seniors.

“Each of these ladies that are graduating now is in that group that really took a chance on us,” Coach Hempen said. “Our seniors laid a new standard for the groups coming in after them.”

The Rams will wrap up their best season in school history against the University of Wyoming in Laramie Oct. 26, with a win serving as a positive moniker going into the offseason.

Adam Williams can be reached at sports@collegian.com or on Twitter @AdamJ_Williams.