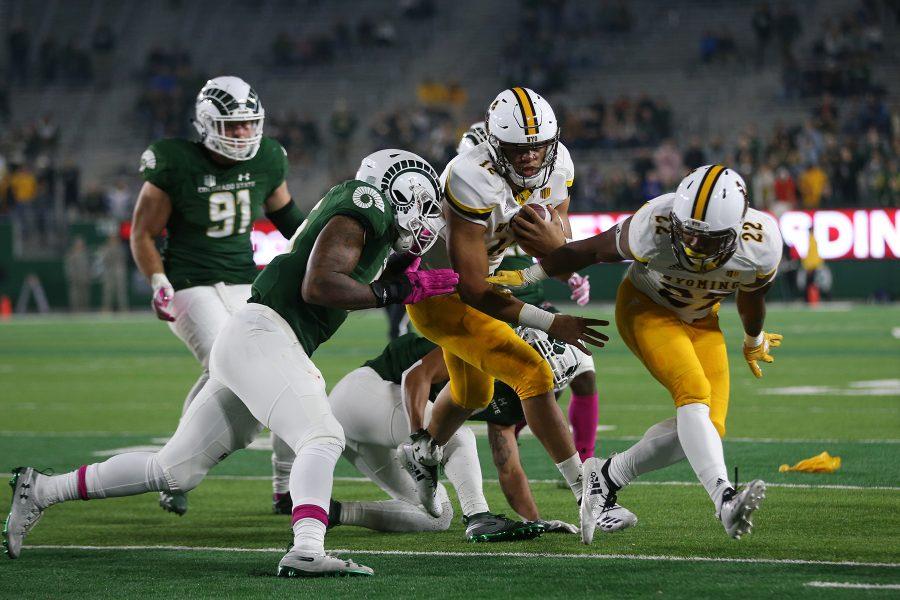 Linebacker Josh Watson makes a play on Wyoming Running Back during the first quarter of play on Oct 26 at Canvas Stadium. The Rams are down 3-0 at half time. (Elliott Jerge | Collegian)

The Rams are actually decent at defending the run, at least over the last month or so, but are so bad against the pass that opposing teams can render that point moot. The University of Wyoming showed that if an opposing team is just average in both the run and pass game, or exception at one, then they can put up points against this Rams’ defense.

The Cowboys were already a good running team, and with freshman Sean Chambers starting over the more traditional redshirt freshman Tyler Vander Waal, they were exceptional.

Part of what enabled a mostly one-dimensional attack to work against the Rams was that the Cowboys could count on not getting much worse in the passing game despite starting a quarterback who will run or hand off 65 to 80 percent of the time.

Though the idea might seem abstract, considering the Cowboys put up almost 300 rushing yards, the game plan from the Cowboys’ perspective is ideal. They have one of the nation’s top rushing leaders. Chambers managed to keep Utah State University off balance enough to go 3-for-5 against even the Aggies higher level pass defense. Coming into the game, those occasional passes were sure to increase in productivity against the Rams.

The Cowboys had the simple decision of how to handle the CSU front seven, who had gotten pressure on the quarterback and been effective against the run in the three games leading up to the Border War. The results, though mediocre, were at least decent compared to early in the season.

The Cowboys knew that their running game was strong enough that at some point the Rams rushing defense would crack and the passing deficiencies would be exposed. Most teams would wear down facing nearly 60 runs, especially a team lacking depth.

Cowboys senior running back Nico Evans is one of the nation’s best and averages 6.6 yards-per-carry. Chambers ran for over five yards-per-carry against an Aggies unit that only allows 3.5 yards-per-carry. Still, the Rams only allowed 4.2 yards per carry in the first half. The fact that the Rams could not sustain that should not be a surprise.

It was 3-0 at half. Then the Cowboys scored on a 14-yard pass to build a 10-0 lead that looked insurmountable with the way the game was going. A 43-yard pass to touchdown put the game out of reach and Chambers was 5-6 with 85 yards and two touchdowns in the second half.

No, they did not pass the ball a lot, but those numbers have to be considered effective and significant. It was just enough to get big chunks, get them into scoring position and guarantee two to three more running plays to wear down the defense every time they got a first down.

If an opposing team has enough runners to feel comfortable rushing 50 or 60 times, then the Cowboys’ game plan against the Rams could work for them. The floor for passing production is so high, most teams can tailor their entire preparation to running and still be sure the pass will be there.

That does not bode well for the Rams going into their last three games as all three teams have been effective in the running game. The aforementioned Aggies and the University of Nevada can pass, so they will do that more, but patrons will likely see the same general strategy played out when the Rams play the Air Force Academy.

No matter what the match-up, with the secondary and overall pass defense failing so consistently, they will be equally, if not more responsible for every loss the program takes.

Mack Beaulieu is a reporter for the collegian who can be reached at sports@collegian.com or on Twitter @Mack_Covers