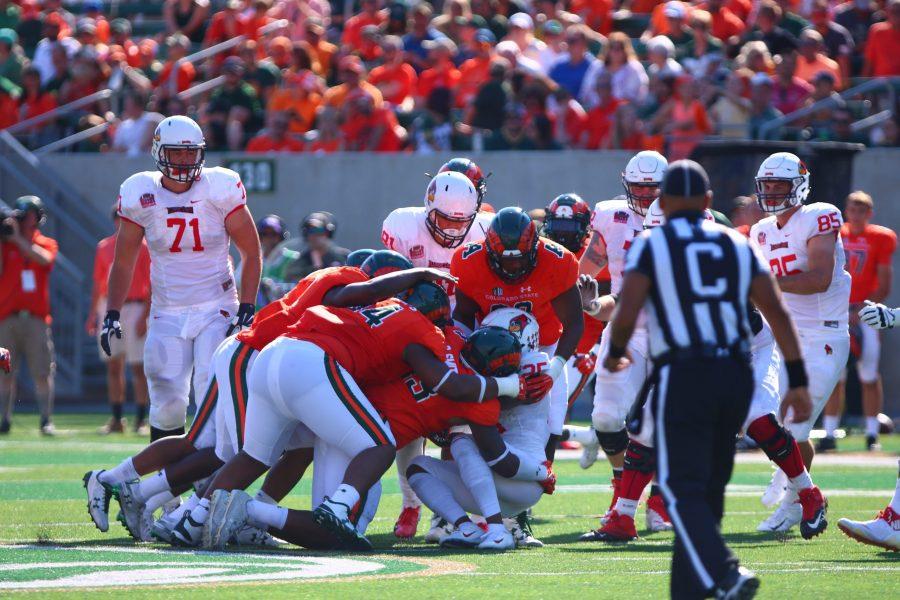 The Rams defensive line tackle an Illinois State offensive man during the fourth quarter of the game on Sept. 22nd. The Rams lost 19-35. (Matt Begeman | Collegian)

With the current University of Wyoming offense setting an extremely low bar, the Colorado State University defense needs a strong showing in the Border War this weekend to prove they have climbed out of the cellar of NCAA defenses.

The Cowboys are arguably the worst offense in all of college football. The unit has not scored more than 19 points so far this season. They are also bottom five in yards per play and last in offensive touchdowns. If the Rams hope to show that they are not one of the worst defenses in college football, then they have to stop the run and get pressure when the Cowboys choose to pass.

If Chambers play and the Rams fail to stop the run, they will lose the game.

The only possible wild card for the Rams this weekend is a big one, with the question of who will start at quarterback. The Rams should hope that the Cowboy’s do not burn a redshirt year and play freshman quarterback Sean Chambers who led the teams most successful offensive stretch of the season last week.

Coaches and players can say it does not matter who they play. However, if last week is any indication, with Chambers, the Cowboys go from a decent run game to an explosive one. They might still be one dimensional, but having a quarterback who is always a threat to run opens up shots downfield. Chambers only threw five times last week, but his three completions averaged over 20 yards.

If Chambers plays and the Rams fail to stop the run, they will lose the game. The Rams will try to stick with a run to pass ratio that has likely benefited the Rams’ defense over the last few games, but if they fall behind quickly to big runs, it will not matter. The Cowboys will continue to run and the defense will likely regress.

Should the Cowboys start redshirt freshman quarterback Tyler Vander Waal, there is nothing tricky about the scenario. If the defense can stop senior running back Nico Evans, then they have stopped the Cowboys. If Vander Waal starts and the Rams’ defense plays even as well as it’s shown it could against San Diego State University or the University of New Mexico, the Rams should dominate the game.

Whether it is Chambers or Vander Waal starting, the Cowboys are going to try and beat the Rams with the run and deep shots downfield.

Over the last few games, the Rams have shown steady improvement on the defensive front while they continue to struggle downfield. The defense has allowed just under 3 yards-per-carry in Mountain West play after allowing over six in their first five games. On top of that, they have averaged 3.5 sacks-per-game over that stretch after only having two in the first five.

Those numbers speak for themselves, even against Boise State University, the rushing defense was okay. BSU’s passing game was on point and predictably shredded the Rams.

Nothing has been going right for the Rams’ defensive backfield, but that should not happen against the Cowboys. If it does, it will be because the Rams once again could not get pressure. If they lose altogether, you can be sure they did not stop the run either.

It is a must-win matchup this weekend for the Rams’ defensive front and it should hope for domination. Anything else will just leave more questions.