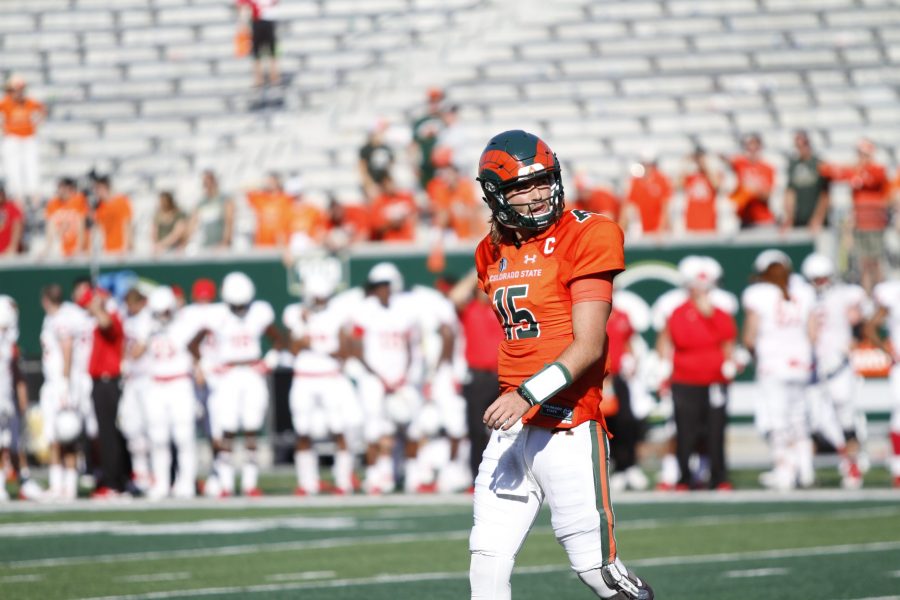 Colin Hill walks off the field after a third down during the game against Illinois State Sept. 22. (Ashley Potts | Collegian)

The carousel at quarterback for Colorado State football is not one that is new but is one that needs to end.

Two years ago, the Rams shuffled between a trio of signal callers in Nick Stevens, Faton Bauta and Collin Hill. This year, with Hill once again part of the controversy, the Rams have not appeared to have learned their lesson.

Last year, once handed the reigns to the offense, Stevens put up one of the best years in school history under center. With 3799 passing yards, Stevens led the Rams’ offense, making up for the team’s lack of defense.

Bobo’s faith in Stevens paid off with one of the most lethal offenses in the Mountain West. He appears to have gone back to the baseball method, sending in a reliever each game.

In his limited playing time coming off of a second-ACL tear, Hill had completed just three of his 15 attempts for a lowly 28 yards and zero touchdowns coming into the game. On Saturday, he went without a completion on his first drive.

The replacement came only one drive after Carta-Samuels had led the Rams down the field for a touchdown to senior Olabisi Johnson over the middle.

After the three-and-out that followed the scoring drive, Bobo pulled Carta-Samuels out, effectively disrupting his rhythm and forcing the Washington transfer to restart.

In both instances, the only purpose that Hill served for the Rams was a disruptor. In a sport where rhythm needs to be established on offense, Bobo has forced his quarterbacks to start and stop their momentum multiple times, similar to the team’s loss to Illinois State.

The burden is not on the shoulders of Hill though.

The normal recovery time for a torn ACL is roughly a year or more, so Hill’s lack of success is not his fault. He needs more time to recover and regain not only the physical strength but the mental strength to endure a pass rush without panicking.

Hill showed growth in his second stint of the game with the Rams, but the numbers were of the stat-padding variety at that point. The game was lost and a catalyst for the lack of success was the inability to settle on a starter.

The trouble for the Rams began prior to the year when Hill was named a team captain over Carta-Samuels who was already entrenched as the starter. There are very few situations where a backup should be a captain and this year was not one of them.

Naming Hill one of the teams’ four captains showed Carta-Samuels early in the year that he had a short leash and would be replaced at a moment’s notice. It was a bad choice by Bobo and has caused nothing but strife.

Following the game, Bobo commented that the quarterback position was to be a competition during the bye week, with the victor starting against San Jose State University.

The Rams will once again be faced with making a decision on their starting signal caller. From now on, when that decision is made, it needs to be maintained barring injury, throughout the contest.

No one wins in a quarterback carousel.