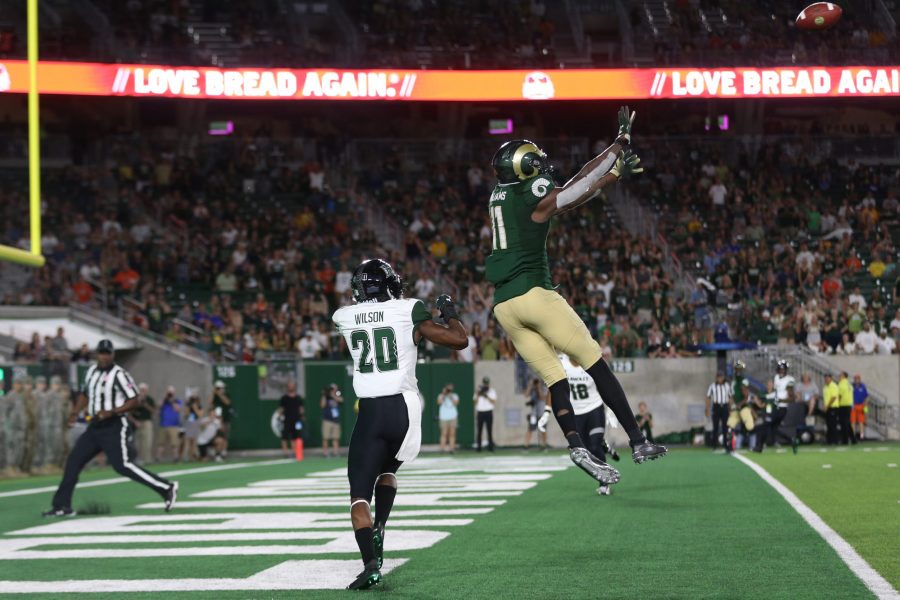 Colorado State Wide Receiver Preston Williams goes up for a catch in the end zone during the fourth quarter of play against the Hawaii Rainbow Warriors at Canvas Stadium on August 25, 2018 in Fort Collins, CO. (Elliott Jerge | Collegian)

A scattered off-field history has led to Preston Williams rolling under the radar thus far in college. With those issues behind him, Williams can now play the role of Colorado State’s next great wideout.

After spending his first year at the University of Tennessee where he originally committed as a five-star recruit, Williams transferred to CSU. Following a season that was lost to NCAA transfer rules, he once again was forced to sit out due to both a misdemeanor assault charge and violation of team rules.

In his first official season as a game day participant for the Rams, Williams has already begun to showcase the skills that made him a 2015 Under Armour High School All-Star Game participant as well as Scout’s top-rated receiver of that same class.

A 210-pound receiver that boats a 6-foot-4 frame, Williams has identical measurables to seven-time Pro Bowler A.J. Green of the Cincinnati Bengals.

Though the track record of the two is lopsided in favor of Green due to his NFL allure, Williams has the potential to reach heights near Green’s level.

In college, Green had one 963-yard season, sandwiched with two seasons he finished in the 800s. The trio of totals is all below what Williams is currently on pace for this season. As well as yardage, Williams is on pace to catch 12 touchdowns this season, three more than Green’s junior season (9).

In college, Williams is already set to bypass Green’s highest-output season, with identical measurables and skill set. Though competing in the Mountain West as opposed to the SEC, Williams has the ability to make up for the opposing talent difference with exponentially better numbers.

The off-field issues aside, Williams only concerning feature is the lack of weight on his large frame. The problem can be muted if he can stay healthy throughout the 12-game slate of games, proving his durability despite the lack of girth. The same was true for Green, who has subsided those concerns during his career having missed just over a game per year in his professional career.

Speed is what can truly separate Williams for the other lanky receivers in college football, just like it did for the 4.5-second 40-yard dash running Green.

Shown in a video from the CSU football performance Twitter page, Williams was shown going head-to-head with running back Marvin Kinsey Jr. in a foot race, one that resulted in a virtual tie. That speed mixed with the leaping ability he showcased as a Mountain West Indoor Track & Field Men’s Athlete of the Week in the triple jump are set to reign supreme for the Rams.

The flashes this year have already occurred for the junior wideout as Williams handled the University of Hawaii with ease in the Rams’ first matchup of the year with a stat line of nine receptions for 188 yards and a pair of touchdowns.

The yardage and touchdown totals both posed as the highest totals in the game. The performance was ignited by a 69-yard reception in which he stiff-armed multiple Rainbow Warriors’ defenders and served as a catalyst for the Rams’ comeback attempt.

In the Rocky Mountain Showdown, Williams was unable to replicate his opening-day numbers, partially due to the ineffectiveness of either Rams’ quarterback.

Despite the 181 yards that the signal-callers were able to combine for against the University of Colorado, Williams was still able to catch six balls for 49 yards, second on the team.

The upcoming pair of matchups in Arkansas and Florida will give Williams an opportunity to rapidly grow his potential NFL Draft stock. Both games will be televised nationally with the latter airing on the SEC Network, a matchup that several eyes will surely be on.

A wide receiver with the skills that Williams has is potentially game-changing in the NFL. The ability to leap over defenders, along with the speed to gain ground of a majority of defensive backs will light up the screen.

As the season draws on, despite the Rams’ team success, the Lovejoy, Georgia native will be sure to draw in NFL scouts in waves. Though the Rams have shown two polar opposite potentials on offense, Williams has the ability to overcome the roller coaster of quarterback performances, with the possibility of the unit steadying as the Rams enter their conference schedule.