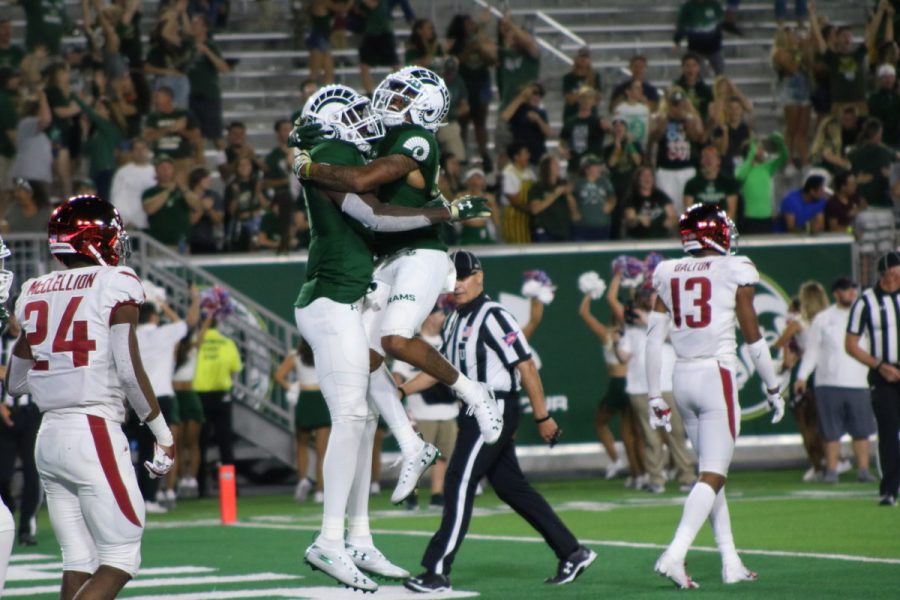 Preston Williams celebrates a touchdown with teammates after his first second half touchdown. (Joe Oakman | Collegian)

The Colorado State Rams overcame a late deficit to defeat the Arkansas Razorbacks 34-27 and earn their first victory of the 2018 season.

The win was CSU’s second ever over an SEC opponent.

CSU sent Arkansas home in disbelief. The Razorbacks built a 27-9 third-quarter lead before the Rams scored 25 unanswered points to win the game. CSU seemed to finally put everything together on defense along with a second-half offensive resurgence led by Preston Williams, highlighting the Rams’ success.

“I’m so proud of this football team for the fight that they showed tonight,” coach Mike Bobo said. “I told them after the game that I wouldn’t want to win it any other way. Your backs are against the wall, things aren’t going great. But they continued to fight and they continued to believe.”

Senior running back Izzy Matthews scored from one yard out to win the game for CSU with only eight seconds remaining. The lead was the first for the Rams since being up 3-0 in the first quarter.

Arkansas controlled most of the first half. But the Rams’ defense kept them within striking distance during the opening 30 minutes. CSU displayed more defensive efficiency against Arkansas than it has all season.

The Rams’ defense looked on their way to redemption from the very first snap of the game. In fact, on the third play from scrimmage, safety Jordan Fogal took full advantage of Arkansas receiver La’Michael Pettway slipping before an intended pass reached him. Fogal made a falling interception and set CSU up at Arkansas’ 43-yard line.

Senior kicker Wyatt Bryan, who provided all of CSU’s offense in the first half, went on to save what would have been a missed opportunity by splitting the uprights from 55 yards out, giving the Rams their first lead of the season.

For the most part, the Rams’ defense stood tall from then until the end of the half. Third down stands had been an issue for CSU against Hawaii and Colorado, but it was a different story in the first half against the Razorbacks.

Arkansas converted only four of their 10 third downs in the half including a few key stops for CSU, two of which forced the Razorbacks to attempt field goals. The saga continued in the second half, as Arkansas went 1-5 on third down in the final two quarters.

“(Third down defense) was huge this game. We didn’t work on it anymore in practice,” Fogal said. “But this week in practice was a lot more physical than it has been. That physicality set the tempo for us against an SEC opponent.”

While the defense held its ground in the opening half, the Rams’ offense struggled to produce as CSU gained only 34 total yards of offense on its first 18 plays from scrimmage.

But the half ended similarly to how it started for CSU.

Emmanuel Jones tipped up a misdirected pass after Arkansas quarterback Ty Storey was hit and came down with CSU’s second interception of the game. On the next play, K.J Carta-Samuels connected with a wide open Cam Butler for 18 yards. The Rams settled for its third field goal of the game and went into the locker room trailing only 13-9 and holding a share of the momentum.

It seemed as if the second half was going to be a different story. Judging from the first few minutes, it did not appear that the Rams would be able to hang around. Arkansas came out firing on all cylinders and looked like they were going to run away with the game.

Storey, who struggled in the first half, was replaced by Cole Kelley. Kelley immediately conducted some major plays for the Razorbacks.

Kelley completed his first two passes of the game, and in doing so, threw for 89 yards and two touchdowns, including a 64-yard touchdown to T.J. Hammonds.

The Rams came out flat-footed and were showing no signs of keeping the game within reach. But a 54-yard catch-and-run by Butler ignited the team.

Williams went on to haul in a four-yard touchdown on the drive with the Rams converting the two-point conversion as well to trim the deficit to 10.

“We just kept on seeing the defense come out and make plays,” Matthews said. “They carried on the momentum so we were like, ‘We can’t just keep waiting on them. We can’t wait on them to be the spark.’”

CSU’s defense stood its ground and provided another stop on the following drive, allowing Preston Williams to pick up right where he left off on the Rams’ next offensive possession.

“Preston (Williams) stepped up huge,” Matthews said. “He got that first touchdown to really get us going and we just went from there.

First, Williams came down with a jump ball for a 31-yard gain. Then, the receiver made a one-handed bobbling grab in the back of the end zone.

“In practice we rep it,” Williams said. “But in practice, we run it different…It was a game-time situation and I just went up and tried to control it.”

All of a sudden the Rams were only down three with 11:07 remaining.

CSU went on to tie the game on Bryan’s fourth field goal of the game 22 yards out with 5:19 remaining in the game.

Shortly after, Emmanuel Jones earned his second third-down sack of the game to force yet another Arkansas punt. Carried by Williams again, the Rams efficiently drove down and won the game on Matthews’ run.

Defensively, linebacker Josh Watson led the Rams in tackles with 12. Jones had a total of five tackles in addition to his two significant sacks and interception.

The Rams will now head to Florida at 1-2, looking to extend their winning streak to multiple games.