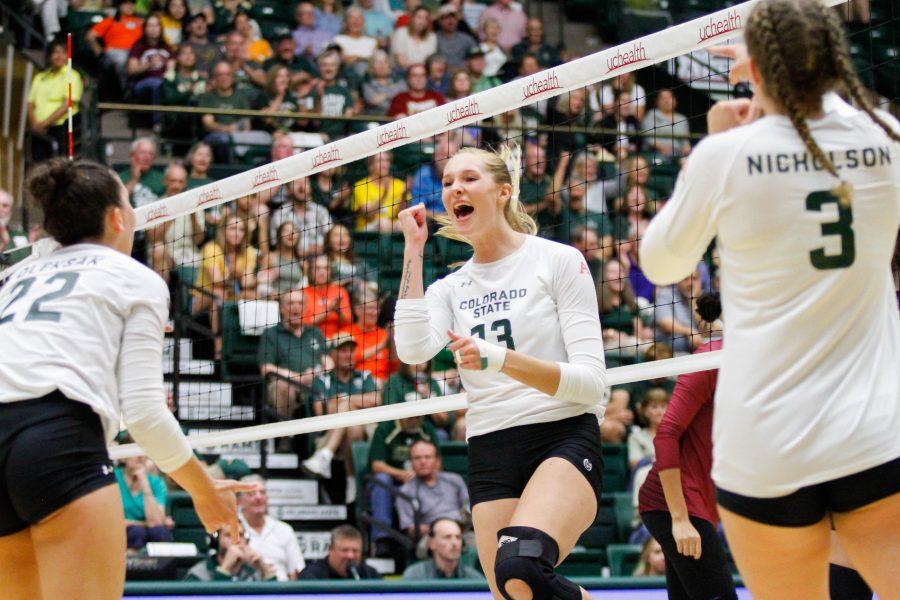 Kirstie Hillyer (13) celebrates a kill against Florida State. The Rams beat the Seminoles 3-2 after a close game. (Ashley Potts | Collegian)

In the opening day of their most difficult tournament of the out-of-conference season, No. 25 Colorado State faced Cincinnati and Florida State, with the former being the matinee.

From the beginning, the Rams faced a climb as Cincinnati jumped out to win the first set behind their defense outside. The Rams were limited to an inside attack through their middles as redshirt sophomore Breana Runnels was shut down outside in the first set. The lack of success was a big reason for the Rams’ opening-set hitting percentage of zero.

Runnels was finally able to make an impact as her first kill led to Cincinnati using their first timeout only six points into the set as the Bearcats trailed 5-1. The success waivered shortly after as the Rams spent the entire match searching for answers in their outside attacking.

Redshirt junior Jordan Thompson served as the Bearcats’ direct counter to Runnels as Cincinnati funneled their entire offense through the 6-foot-4 outside hitter. The attack against the Rams was a direct contradiction to their own offensive attack.

Thompson accrued 66 chances in the match, resulting in a game-high 31 kills as she singlehandedly led the charge for the visitors. The plan was not a surprise to coach Tom Hilbert given Thompson came into the match with nearly double the attempts of any other hitter on the team.

“When they want to beat somebody, that’s what they do,” coach Tom Hilbert said. “That kid can get kills against anybody… If that’s not one of the best players in the United States, I don’t know who is.”

Shouldering the load for the Bearcats, Thompson led the upset against the Rams who came into the weekend on a modest two-game winning streak before falling to .500 going into the nightcap.

Each time the Rams showed glimpses of hope, including the third set victory, the hosts were thwarted by another swarm from the Bearcats. In a match of runs, Cincinnati had the final say in each with the final set appearing to be a formality as the Bearcats rolled.

Despite the large reliance on the Edina, Minnesota native, Thompson never tired. As the final set ended, her energy had only shown modest decline as she appeared to be ready to go five sets with ease if needed.

A half-dozen hours between matches appeared to give the Rams the rest they needed as they came out firing against Florida State University. The match turned midway through, forcing the Rams to take the match in five sets (25-21, 25-11, 23-25, 16-25, 20-18).

Runnels was also able to shake off her personal rust as she led the first set with five kills. The kills were not without trouble though as she only accrued a .100 hitting percentage in the opening set, four hitting errors to show for it.

Once a depth piece, sophomore Maddi Foutz started both matches for the Rams at libero in place of Amanda Young. With an injury sidelining the aforementioned Young, Foutz tallied 13 digs in the opening match, besting that number in the concluding match of the day with 23. Both totals were team highs.

“Maddi can be such a clutch player,” Hillyer said. “I think she definitely showed a lot of that tonight… she’s an amazing athlete and I think she did a great job of showing that.”

The roll continued in the second set as the Rams took it by a wide margin, securing the win while holding the Seminoles to single digits until the waning moments of the set. Foutz once again made an impact with several key digs to keep the volley alive.

Fellow Bayfield high school standout, Kirstie Hillyer led the Rams attack with 21 kills in the second match. The former Wolverines paired to lead the Rams in each facet of the game. Though the Rams only had five blocks in the second match, Hillyer made her presence felt in the kills department instead.

Fittingly, the match went back and forth in the fifth set, with the scoring pushing to a total Hillyer said she had never seen. Coming up large for the Rams was Foutz once again who served the game-winning point in the form of an ace.

The match posed as a direct reversal of the opening match of the day as the Rams had a renewed focus. The early loss, though likely to drop them out of the rankings next week, did not come back to hurt them a second time. The second half of the match wore on the home team, but the Rams found a new energy late to seal the match against a surging Seminoles team led by junior Payton Caffrey who paced the match with 27 kills.

Colorado State will play their final match of the tournament on Sunday at 1:30 p.m. The Rams will host Texas Christian in an attempt to avoid falling to 3-3 after their hardest weekend of the year.