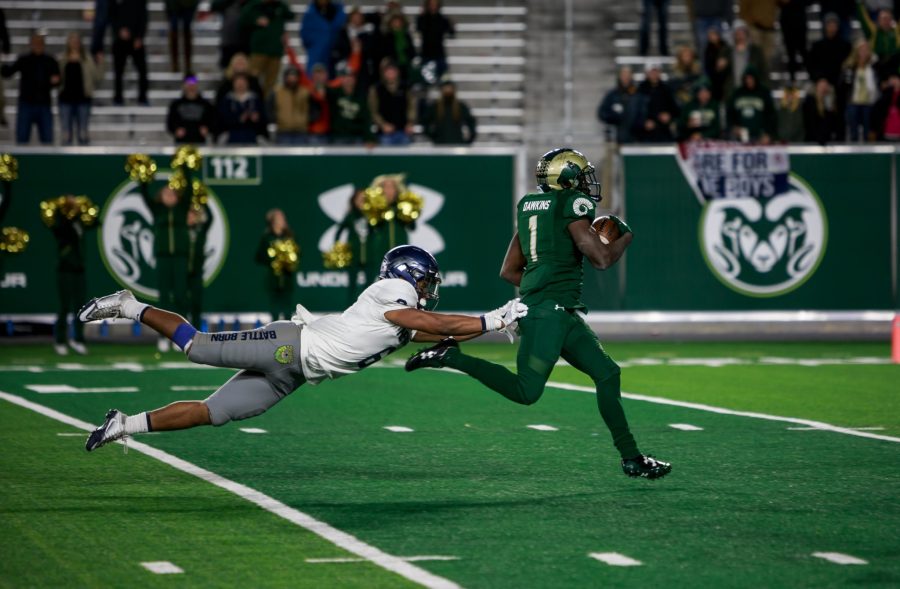 CSU running back Dalyn Dawkins outruns defensive back Nephi Sewell on his way to scoring a touchdown against Nevada during the 2017 Homecoming game. (Davis Bonner | Collegian)

Former Colorado State standout and current Tennessee Titans running back Dalyn Dawkins got together by phone with reporter Mack Beaulieu to talk about the state of CSU football and how he came to be with the Titans after going undrafted.

Q. How much have you seen or heard about what’s going on with the CSU football team?

A. I’ve been keeping up for sure, keeping in touch with the guys and see how things are going. I haven’t been able to see much of the games, but I’ve heard.

Q. What are your impressions of why they’re struggling right now and have you been able to give your old teammates any support or advice?

A. I really couldn’t say, not being there and seeing what’s going on. Sometimes it’s just like that with football, it takes a while to get going sometimes and it just starts with practice… Also they have to erase that last loss. Whatever loss, erase that and focus on the next week. I was talking to one of them and told them, “the season is not over, y’all gotta keep believing, y’all gotta keep grinding,” then the following week they beat Arkansas so I was real happy and proud to see that. I was away in Jacksonville after this last loss so I wasn’t really able to talk to them… You just gotta lay it out there on the line, you can’t have regrets, because really the season goes by fast. That’s really the only advice I have.

Q. Is there any part of you that wishes you could be here to help?

A. A part of me…(laughs)… You know … You know college football was fun, it was a great experience, but at the end of my senior year I knew that I was ready to move on. I did everything I wanted to do, I didn’t have any regrets, I laid it out there. It was a fun experience, so I do miss it at times, but I wouldn’t say I want to go back to it.

Q: How is your typical day different in the NFL then it was at CSU?

A: I love the NFL, because it’s all about football. The typical day is from 8-4:30 from meetings, practice, treatment, refueling all through that period of time is kind of my typical day.

Q: Are you settled in in Tennessee yet?

A: Definitely, I got set up with a place as soon as I came to camp… I’m comfortable here in Nashville because it feels like home because I’m actually from Louisville.

Q: Were you surprised that you went undrafted and what was the process after that?

A: Not just me, but a lot of people I was around, we were all shocked. But you know, that was out of my control. It’s something that’s happened to me all my life… There was several teams that wanted me to sign with them after the draft (laughs), they started calling me in the seventh round. Tennessee was one of the teams I was talking to prior to the draft though, so I had already liked the situation here. That’s why I chose Tennessee, it seemed like a no-brainer at the time who I wanted to sign with.

Q: How much help and advice did you get from the family and your uncle, Brian Dawkins, in the process?

A: He didn’t want to get in the mix too much, you know if I need him he’s definitely going to tell me any advice. We didn’t talk about that situation until after the draft and right after he told me his advice. He was like, “man you got to pick the best situation for you.” He told me to look up every team that’s interested, look up their roster and see what’s the best situation and that’s what I did… It was being close to where I’m from and they only had three running backs so I said, “Wow that’s a good opportunity.”

Mack Beaulieu is a reporter for the Collegian and can be reached at sports@collegian.com or on Twitter @Macknz_James.