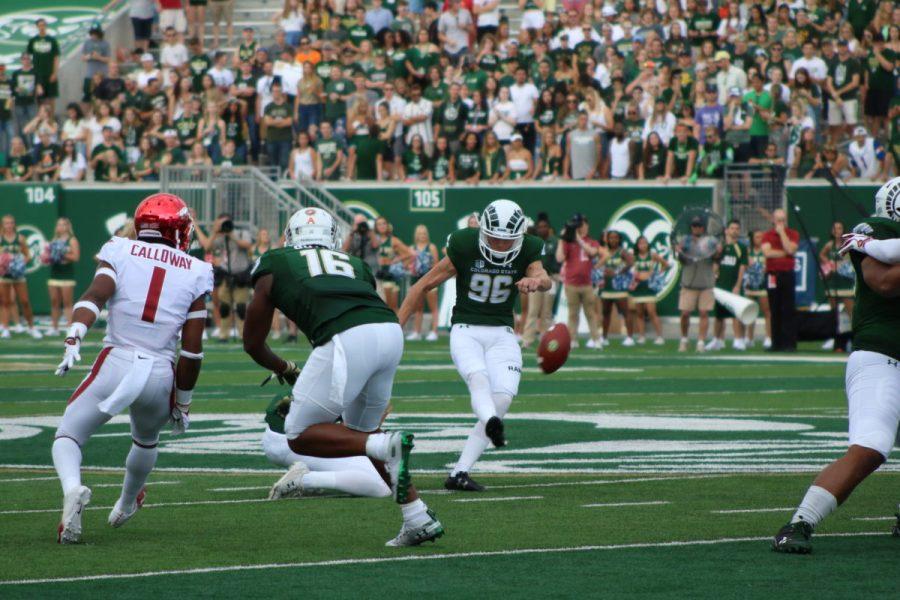 Colorado State’s performance against the Florida Gators in a 48-10 blowout defeat was disastrous on every level.

The type of mistakes that are inexcusable against an SEC foe on the road piled up for the Rams throughout the duration of the forgettable game. CSU’s normally sound special teams unit was the most glaring of all.

Sophomore punter Ryan Stonehouse was unable to handle a tolerable snap on what would have been his first punt attempt of the game, allowing the defense to swarm before he was able to get the ball downfield.

Florida was set up in the red zone to begin the drive and capitalized with a field goal to score the game’s first points.

Punting was an issue CSU could not solve against the Gators.

Later in the first half, Florida blocked a Stonehouse punt attempt and collapsed on the ball in the end zone for a touchdown, giving the Gators a 13-0 lead.

Even when Stonehouse was able to cleanly punt the ball, the results were not ideal. Early in the fourth quarter, junior wide receiver Freddie Swain took a punt back 85 yards for a touchdown that only added insult to injury.

One would assume that senior kicker Wyatt Bryan was feeling self-assured heading into Saturday’s game, having just broken the CSU all-time scoring record against Arkansas and converting all four of his attempts.

But self-assurance was far from displayed in the kicker’s performance against the Gators. Bryan had a chance to tie the score at three on the Rams’ second offensive drive of the game in what would have been a much-needed response to their mistakes if they hoped to keep pace.

Bryan set up from 41 yards out for the field goal, a practical kick for the senior considering he nailed a 55-yarder against the Razorbacks. The ball was off target the moment it left Bryan’s foot as he shanked it wide right.

Later in the second quarter, with the Rams trailing 6-0 and desperately needing to put points on the board, Bryan sent a 53-yard attempt wayward of the uprights, this time to the left.

The performance on special teams was extremely uncharacteristic for CSU. The mistakes could not have come at a worse time for the Rams considering they were facing an SEC opponent.

It comes as no surprise that Florida feasted on CSU’s miscues. There is essentially no margin for error when playing an SEC team on the road.

The Gators certainly proved that to be true.

The most difficult thing to swallow for the Rams will be the fact that special teams errors resulted in 24 points for Florida,  with a glaring 17 of those 24 points coming in the first half.

CSU’s special teams took away any chance the Rams had at getting into a rhythm while they were still within reach. If CSU’s special teams played how it normally does, the first half could have played out much differently. If Bryan converted his first two field goal attempts, the score would have been tied at six.

Instead, the Rams did not get on the board until they were behind by 27 points, and the Gators won by 38 points.

Who knows how things could have played out if CSU performed up to par on special teams in the early going. What is known is that the Rams cannot make this a habit if they want to string together some wins down the stretch this season.