From the shadows, CSU’s Luke Murray is making players shine 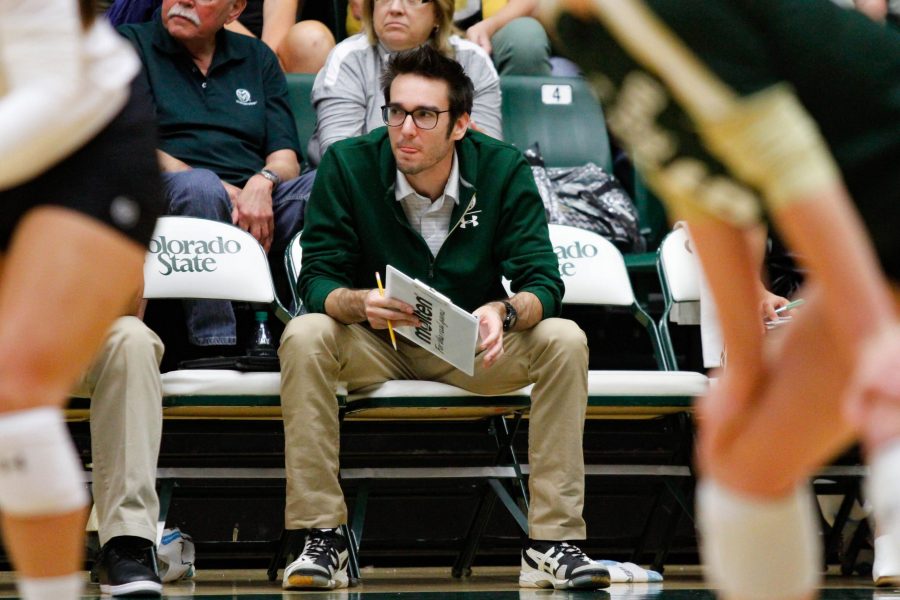 An introvert that leads through posing questions and calm lessons, Murray has set a culture of success for the middle blockers and setters that he coaches. With Hilbert as the enforcer on the court, the two have created a focal point that fuels the Rams’ success.

Four years at Penn State and a spot on the United States National Team have allowed Murray to hone his craft, shaping the values and teachings that he passes to his players in his new role. Once a championship-caliber player, Murray has brought the silent fire of competition to Rams’ practices since he began his tenure.

“He really knows the game because he played it himself on a really good team,” setter Katie Oleksak said. “I think that helps.”

Show up to a CSU volleyball practice and Murray is not on the side coaching. He is at the net spewing playful trash talk to the players across the net. The next second, he will hop out of the gym to lay an attack on the Rams defense that is reminiscent of his playing days, even if he is not in the same playing shape anymore.

Murray’s versatility allows the Rams’ coaching staff to lead by example. The biggest element Murray brings to the Rams is his vision for the court, an element he practices and preaches to his players.

Vision is something that Murray does instinctually. The same task is a thought process for the Rams’ players, something Hilbert sees as the biggest lesson Murray can teach.

“He’s been playing the game for a long time,” Hilbert said. “He’ll make a certain block move with the hand or a defensive play … that’s not just him being fast. What I want (the players) to take is his vision of the game. What he sees when he’s playing.”

Murray also brings a calmness to the games and practice. Outside of a handful of serious talks between Murray and the players, the calm represented by Murray passes directly on to the Rams’ players.

“I’m pretty monotone,” Murray said. “I tell it like it is. Most of the time I just shoot it straight on what I’m seeing, what I think. I think it provides a balance (to Tom).”

That tone has allowed Murray to mesh well with fellow assistant coach Emily Kohan who Hilbert describes as much more extroverted. The pair of assistants have separate focuses but are trusted to lead practice even when Hilbert is not around.

Veteran players like Kirstie Hillyer, Paulina Hougaard-Jensen and Oleksak see the lessons he preaches, trusting the words because of not only the history of success in his playing career but also the type of person he is.

The players shared a common message: a love for Murray.

“He’s just a nice guy,” Hillyer said. “He’s easy to talk to on the court and off the court. He’s just always there for (us).”

Hillyer and Oleksak present two of the shining examples of Murray’s lessons and leadership at work.

Whether it’s competing with Oleksak in setting her first year or turning a “raw” Hillyer into one of the top middles in the nation, Murray invests himself. Though Hillyer has transformed into a star for the Rams, Hilbert believes that Murray has had an even larger impact on Hougaard-Jensen.

He understands (blocking) because it’s such a big thing in men’s volleyball,” Hilbert said. “He was a great blocker for a small player, so he knows the technical packages that we’re trying to teach and he knows how to teach them.”

Coming into last year as a depth piece in the middle for the Rams, Hougaard-Jensen stepped up in the absence of Alexandra Polleto and went on to hit the second-highest percentage in the nation as well as being a pivotal piece when Hillyer went down with a knee injury in the same time span.

The relationship is not just one that is work related though.

Even off of the court, the Rams have dedicated themselves to a relationship with Murray. An invite to his baby shower, as well as players babysitting the subsequent child following the shower, show the players are invested in Murray’s personal life as well.

Bringing Murray in was described as a calculated risk by Hilbert, one that he feels has paid dividends in waves.

“It was somewhat of a risk because he was a little bit less experienced than most assistants we bring in,” Hilbert said. “But we (feel) like it was a pretty good deal at the time and he’s done a nice job.”

With four seasons under his belt already, Murray has the opportunity to once again transform the middle of the Rams attack, a skill in which he has shined.