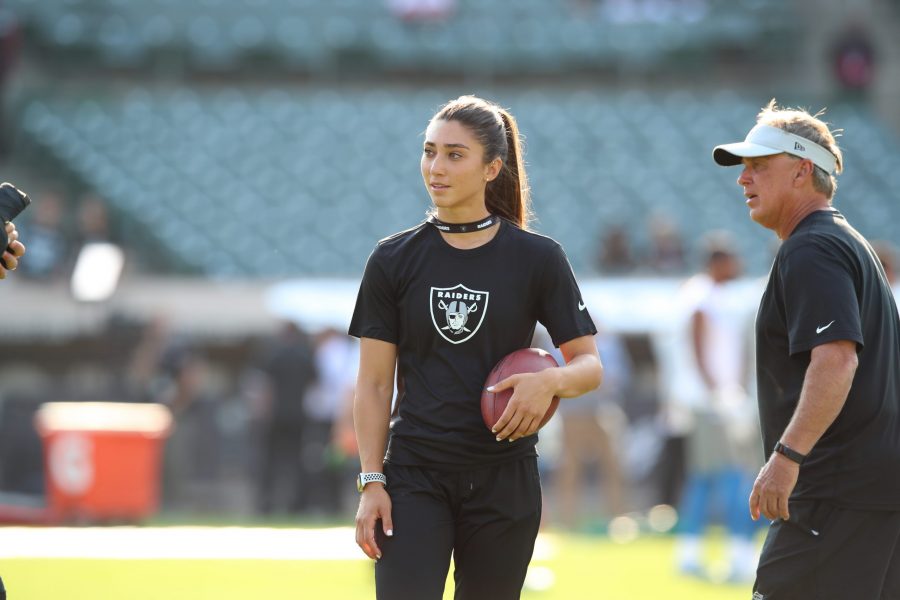 As another professional sports season opens, another female graduate of Colorado State University is making her presence known in the coaching ranks.

2015 CSU alumna and Pueblo, Colorado-native Kelsey Martinez was brought on the Oakland Raiders coaching staff as the first female assistant strength and conditioning coach before the 2018 season.

Martinez grew up loving sports. She played softball at Bethany College in Kansas before continuing her education at CSU in 2014 for her final two years as an undergraduate, earning a degree in health and exercise science.

The experiences Martinez gained from studying at CSU played a crucial role in leading her to where she is today.

“It really prepared me well, all of the classes did,” Martinez said. “To this day, I use what I’ve learned. They had every tool that I needed and the biggest thing was them getting us into the working field. It made the process so much smoother.”

The launching point for Martinez was a required internship she had to complete to earn her degree.

With the aid of her health and exercise science instructor Wendy DeYoung, Martinez decided to put her efforts into interning for the ESPN-affiliated Tom Shaw Performance camp in Orlando, Florida for a full semester.

After completing her internship and graduating from CSU, Shaw brought Martinez on to work full-time in Orlando. Martinez specialized in high-performance training for four years under Shaw before they were both promoted to the NFL.

Martinez credits Shaw for giving her the necessary experience to succeed.

“As soon as I worked with Tom Shaw, he had NFL players with him,” Martinez said. “He had been working with them for years and years, so when I got there I already was able to start working with them. The competitiveness that was in Florida was pretty mind-blowing.”

Working in the NFL and under Raiders head coach Jon Gruden calls for maximum effort at all times, something Martinez does not mind even on the longer days.

Martinez focuses heavily on constant improvement during the week.

“We work with the guys inside the weight room and get them to try to be more explosive and prevent them from getting injured on the field,” Martinez said. “We are kind of in charge of getting them ready for practice and to start the game.”

“The biggest difference is the amount of people here,” Martinez said. “You go from a huge roster to a 53-man roster. Before players made the final roster, you had to move through a lot of guys. Now that it is down, you get even closer with some of the guys.”

Martinez adds to a consistently growing list of CSU female graduates who have made an impact in the sports world.

The list is headlined by Becky Hammon, former Rams’ women’s basketball star and the first full-time female assistant NBA coach. In addition, Jenny Cavnar became the third female ever to call play-by-play for an MLB game.

Martinez acknowledged the role CSU faculty have played in the modern triumph of female graduates.

“I really think it’s awesome that they are able to develop people and prepare them for their careers (in sports),” Martinez said. “It kind of says a lot. It just seems like the professors (and) the people that work for CSU just really understand what needs to be done to get students prepared to make a career for themselves.”

Being a female assistant coach in the NFL is a unique accomplishment. There are currently only two other full-time assistant female coaches in the NFL, Kathryn Smith for the Buffalo Bills and Katie Sowers for the San Francisco 49ers.

Despite the rarity, Martinez is not surprised that she has made it this far in so little time. The lessons she has learned since 2015 left no question in her mind that she would end up in the NFL.

“To make it where I am right now is huge to me,” Martinez said. “It’s just something that I thought when I was in Orlando that I could see myself doing. The experience that I’ve been able to have to continue to do what I love is the biggest thing.”

Last Sunday, Martinez had the opportunity to return to her home state when the Raiders faced the Broncos at Mile High Stadium in Denver, a very special moment for Martinez considering her family was in attendance at the game.

The road continues on for the former Ram as the Raiders head to Miami for a showdown with the Dolphins Sept. 23.

Collegian reporter Eddie Herz can be reached at sports@collegian.com or on Twitter @Eddie_Herz.