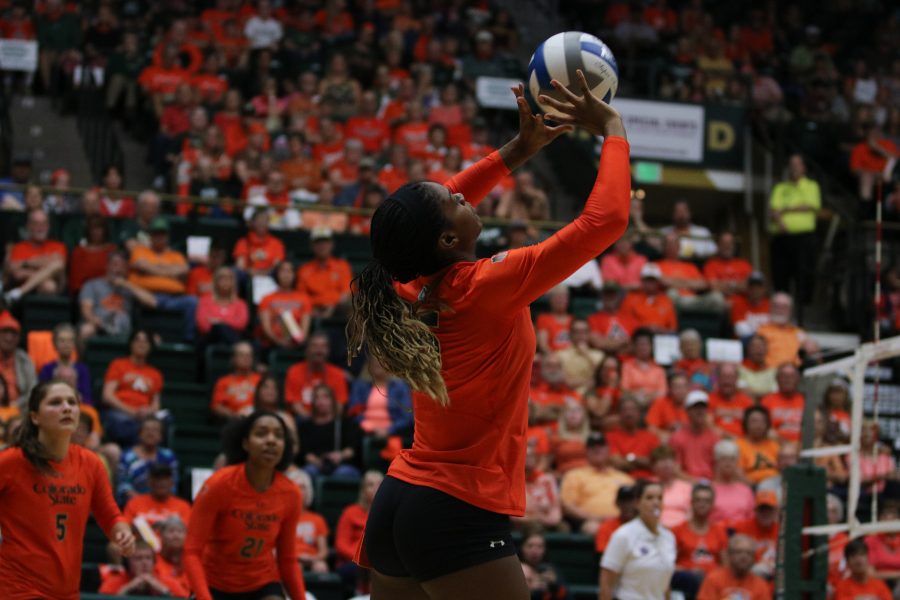 This season has been different for Colorado State volleyball than in those previous. Coming into the season with no seniors on the team, CSU was expected to go through some growing pains.

The Rams exited their non-conference season with four losses to four high-level opponents in Illinois, Cincinnati, Michigan and Colorado after totaling only three losses all of last season.

In the opening set of the trip, CSU had fewer errors and a higher hitting percentage, but the Aztecs went on a 10-1 run, which proved to be too much for the Rams to overcome as they fell.

Much like they have all season, CSU dropped the first set but went on to win the next three sets.

In set two the Rams hit a game-high .435 hitting percentage dominating most of the way.

The Aztecs can blame the third frame on their hitting percentage with a 0.75 compared to CSU’s .263. The Rams had six more kills than the Aztecs en route to 25-18 victory.

Trying to avoid a fifth set, the Rams finished the match with a 9-3 run to finish off the Aztecs and earn their second conference road victory this season with the help of a season-high hitting percentage from Breana Runnels (.378).

“We didn’t have very many mistakes and limited our errors,” Coach Tom Hilbert said. “Breana Runnels had a great match and Kirstie Hillyer was unstoppable when we got her the right set. I think Katie Oleksak distributed the ball well tonight too.”

After a victory in San Diego in which the Rams recorded 18 blocks, CSU experienced its first upset in conference play against Fresno State with their block party reversing its course.

Uncharacteristically, errors and a dismal zero hitting percentage led to a first set defeat for the Rams.

In what looked like another typical Rams game, CSU rallied in the second frame controlling the net with four blocks and looked to gain momentum, but the Bulldogs had other plans for the match.

The Bulldogs commanded the third frame, never letting CSU shrink the lead within three the entire set and never allowing more than two points back-to-back during the set.

CSU was fighting for their lives on the road in Fresno. The fourth and final frame was the most competitive with both teams exchanging points, but a late run by the Bulldogs ended any comeback hopes for the Rams.

CSU was out-blocked 13 to five , including zero blocks in the final two sets and had six more errors than the Bulldogs. Breana Runnels continued her outstanding sophomore campaign, recording her fifth double-double of the season. Jenna Heinemeyer led the back row with a career-high 14 digs in the match.

Hilbert said starting with poor serves, Fresno’s right-side attacks and a good defense plan from the Bulldogs led to their loss.

CSU will have no time to dwell on the loss and they will head to Laramie, Wyoming Oct. 2 for the Border War. The Cowgirls look to be one of the potential teams that pose a legitimate threat to the Rams in Mountain West play.