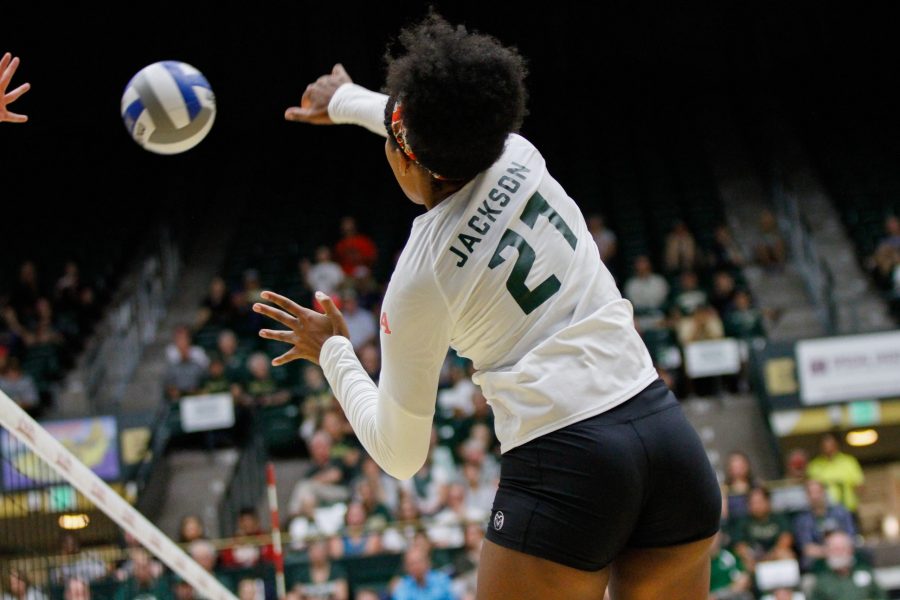 From the first serve, Colorado State volleyball proved to be the superior team against Indiana State University.

To start, Coach Tom Hilbert drew up a new starting lineup, with Olivia Nicholson starting as libero, in place of mainstay Amanda Young who is battling illness.

“We feel like Olivia is a better serve receiver than anybody else on our team at this point,” Hilbert said. “The way she reads stuff, gets the balls and controls them, she does that very well too.”

In addition to Nicholson, Hilbert started sophomore Ellie Gubser as an outside hitter.

Early in the first set, the Rams set the tempo for the remainder of the match by jumping out to an early 13-5 lead. Indiana State continued to bury themselves with a plethora of errors, a total of twelve in the set. CSU capitalized off the errors and five kills by Jessica Jackson to earn a 25-17 victory.

In the second set, Indiana State went on a 4-0 run to narrow the score, but the Rams continued their dominance throughout. CSU forced Indiana State to commit another twelve errors in the set and held the Sycamores to a negative hitting percentage (-.087).

After a slow start in the first set, the Breanna Runnels show was in full effect as she totaled four kills off of eight attacks.

“I just wasn’t as focused as I could have been,” Runnels said. “Once the game really started to pick up we got comfortable.”

The Rams torched Indiana State on the margins by out-blocking the Sycamores five to one to earn a 25-14 win. Hilbert says in the game-plan, he emphasized serving and blocking and his team answered the call.

“We did very good things in those two areas today,” Hilbert said. “We served the ball very tough, hit the right people and blocked really well.”

The Rams came into the third set looking determined to sweep the Sycamores. In the early portion of the set, the Sycamores were able to keep the score close, but CSU abruptly pulled away 20-9 causing Hilbert to subsitute in some of his younger players.

Hilbert pulled Runnels for freshmen Jacqi Van Liefde in the final points of the match to close out the Sycamores 25-14 and secure their fourth sweep of the season.

CSU held Indiana State to a zero hitting percentage, 25 attacking errors and 29 total points. Runnels finished with 14.5 points and 10 kills and Jackson collected 9 kills off of 11 total attacks and a near-perfect .818 hitting percentage.

“It’s awesome to get a sweep like this, but I also do think we do have another gear and we need to show that tomorrow,” said Katie Oleksak.

Oleksak and the Rams will look to make quick adjustments before heading to Boulder, Colorado for the second part of the tournament where they will meet Portland State University and the University of Colorado. Hilbert is hoping for the middle blocking to improve upon today and make a quick turnaround before tomorrow night’s games.

CSU will play Portland State at noon and CU at 8 p.m. at CU Events Center.