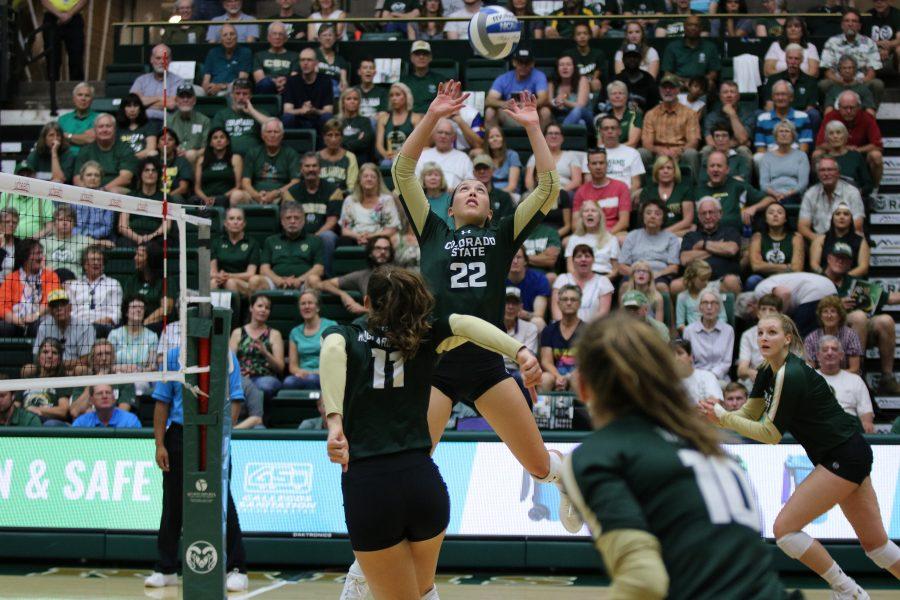 The story of the Colorado State volleyball season to this point can be summarized by simply watching their previous two games.

CSU earned a sweep in the second day of the Colorado Classic over Portland State but fell to the University of Colorado at the CU Events Center in Boulder on Sept. 13.

In the first set, the Vikings jumped out to an early 5-1 lead. CSU eventually tied the game up and never looked back from there, limiting their opponent to 12 points the rest of the opening set.

“Probably the first five points we were just not playing very well, and then we got better,” coach Tom Hilbert said. “Blocking is always important, and it was really important as we made that run in the first set.”

Once again, the Rams were in a battle in the second set. A lot of errors from the Rams gave Portland State life late in the set. With the score knotted at 26-26, the Vikings had an attack error. On set point, a block assist from sophomore Ellie Gubser and junior Paulina Hougaard-Jensen awarded the Rams the set victory.

With a matchup against in-state rival CU looming, CSU was eyeing the sweep. The Rams clicked on all cylinders, dominating the Vikings 25-11 in the third and final set.

Redshirt sophomore Breanna Runnels was the star of the game, leading the Rams with 17 kills and a hitting percentage of .306. Hougaard-Jensen contributed on both sides, with four service aces and six blocks.

The first set lived up to the excitement coming in with both teams going back and forth, eventually tying the score at 14. Neither team was able to garner any momentum, as the score reached a tie at 24. CU was able to pull through late on a 4-2 run to steal the set 28-26.

The same situation occurred in set two. Neither team led by more than three points, with 15 score ties and five lead changes. Ultimately, CU’s late-set performance was better than the Rams as they closed 26-24.

Fighting for their lives, CSU prevailed in the third set 25-19, despite a 7-2 run by CU in the set. In a game of several runs, the Rams had finally come through without allowing the Buffs to rebound.

CU built a big 19-8 lead in the fourth set, but the Rams did not back down.

CSU went on a 13-3 run to narrow the score to a razor-thin 22-21. Much as they did all night, CU’s offense succeeded in the final points to take the set and match from the Rams.

Hilbert knows his team failed to capitalize in late game situations and it hurt them.

“We needed to take care of the end-game scenarios in sets one and two because we’re ahead with the opportunity to win and we don’t do it. That ends up beating us,” Hilbert said. “They are a more physical team than we are and so it wore us down after a while.”

Runnels was once again exceptional in the loss with 18 kills, 10 digs and two blocks. Redshirt juniors Jessica Jackson and Kirstie Hillyer recorded 14 and 11 kills respectively. Junior Katie Oleksak also picked up 54 assists, two blocks and 11 digs to record another double-double on the year.