CSU Soccer falls to Gonzaga in opening game of the weekend 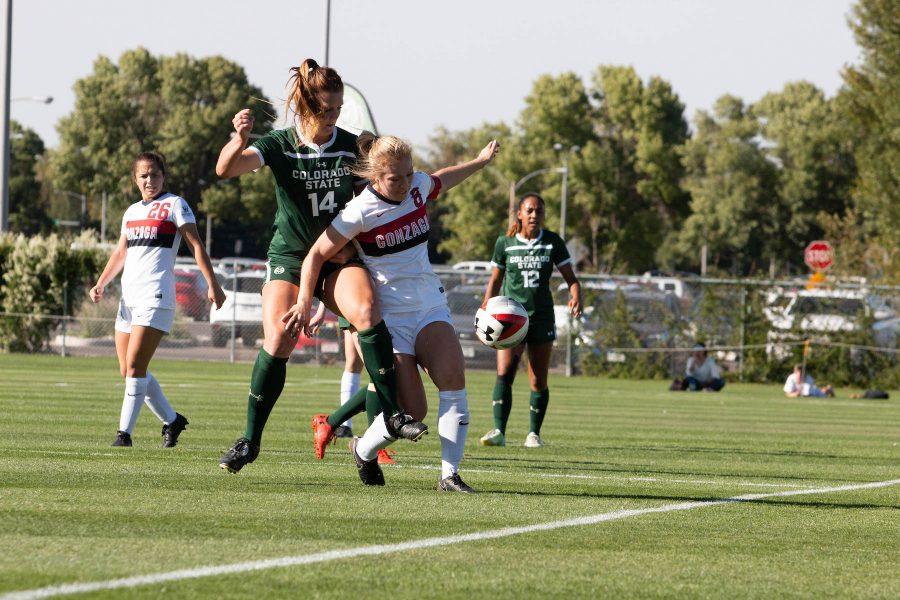 Hannah Gerdin, senior, jumps for the ball during the first half. CSU lost 0-2 to Gonzaga on August 26, 2018. (Julia Bailey | Collegian)

Colorado State soccer opened their set of weekend games unsuccessfully on Thursday, falling at home to the University of Gonzaga, 2-0.

The Rams began the match with a short possession in the offensive zone early with Gonzaga responding, driving to the other side of the field. CSU attempted to gain possession, but Gonzaga was awarded a corner kick, the first scoring opportunity for the Bulldogs in the match.

The first corner kick sailed across the field near the opposite corner. But, a mere 20 seconds later, Gonzaga was awarded a second corner kick.

Gonzaga opted to play conservative, as junior Samantha Heilman kicked the ball to junior Madeline Gotta who was wide-open. Gotta lined up outside the penalty area and kicked a perfect curving shot into the top right of the back of the net, just out of the reach of redshirt junior goalkeeper Hunter Peifer.

Starting goalkeeper Hunter Peifer was making her return from injury against the Bulldogs.

“I’m really happy to be back. I had to take the time to recover, let the brain recover a little bit,” Peifer said. “It felt really good to be back up on the field.”

Immediately following Gonzaga’s goal, the Rams had their first chance to strike back.

Senior Hannah Gerdin shot the ball high, sailing above the net. Soon after, in the 10th minute, Gerdin lined up another shot, but Gonzaga redshirt sophomore goalkeeper Isabel Jones was able to catch the ball.

Immediately following Gerdins’ shot, Gonzaga pushed the ball up the field and shot wide as the visitors’ continued to put on the pressure.

As a result, in the 12th minute of the match, Gonzaga freshman Gabriela Maas slotted a great pass to Heilman who was able to get off a shot that found the back of the net.

The Bulldogs constant pressure was able to thwart the Rams’ chances of staging a comeback.

But, in the 39th minute, senior Kaija Ornes gained possession in the offensive zone and put an accurate shot on net. Jones again made a great save, holding CSU without a goal once again.

The second half was a new chance for the Rams as they came out and tried to be aggressive.

That aggression came back to hurt the Bulldogs as in the 48th minute, a yellow card was issued to Gonzaga senior Jodi Ulkekul. Four more yellow cards followed in the half with two going to each squad. The tension in the game rose as the Rams’ attempted to climb back into the game.

The referees were at fault as well with a total of 35 foul calls in addition to the five yellow cards. Coaches for both teams were often left baffled after the referee’s whistle, and even briefly spoke across the scorer’s tent about the questionable refereeing.

“Neither team knew what to do. It’s a challenge to play in a game like that,” said Coach Bill Hempen.

Despite the officiating, the Rams were able to generate numerous chances in the second half and took eight shots. Unfortunately for CSU, the plot remained the same as it has in the opening weeks of their season as each ball that missed the net, despite the CSU pressure.

“We have to take advantage of our opportunities because we are definitely getting them,” midfielder Karli Eheart said. “We’re getting a lot of shots, we’re just not putting them in.”

The best scoring chance came on a CSU penalty kick by junior Caeley Lordemann who came close but once again missed the mark.

“Goals change the mentality. We missed that opportunity to get a stranglehold on the second half,” Hempen said. “We’re still in search of the one that’s going to change things for us.”

CSU will look to rebound and return to their winning ways against Southern Methodist at home on Sunday at noon.

Adam Williams can be reached at sports@collegian.com or on Twitter @AdamJ__Williams.