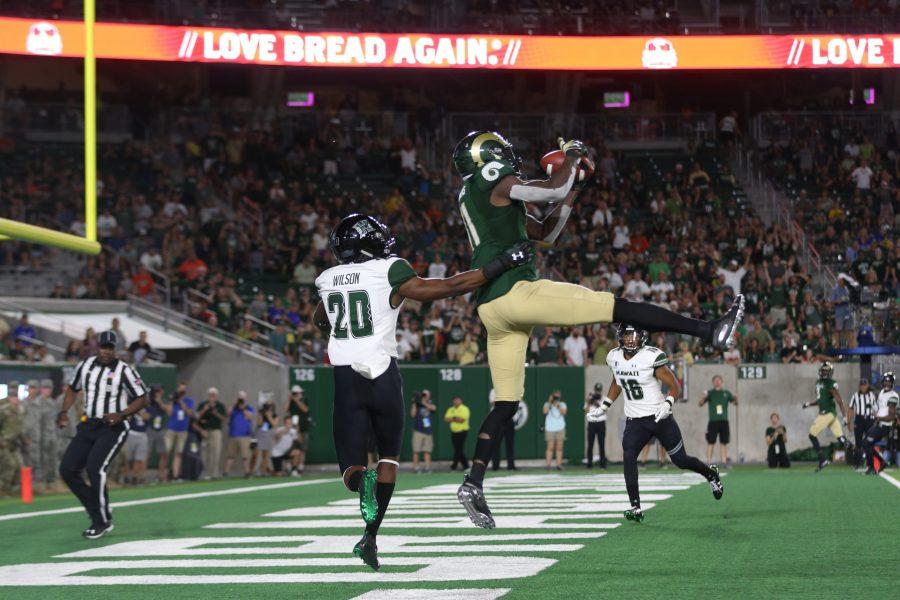 Colorado State Wide Receiver Preston Williams goes up for a catch in the end zone during the fourth quarter of play against the Hawaii Rainbow Warriors at Canvas Stadium on August 25, 2018 in Fort Collins, CO. (Elliott Jerge | Collegian)

As a result of a pair of productive starts to the 2018 season, Colorado State football wide receiver’s Olabisi Johnson and Preston Williams have been named to the Biletnikoff Award Watch List.

The award is given annually to recognize the best receiver in Division I college football. Currently, there are 61 total players on the list.

Johnson and Williams have been the seldom bright spots in what has been a losing start to the season for CSU.

Williams, a junior who transferred from Tennessee before the 2017 season, ranks second in receiving yards in the FBS with 511. The 6-foot-4 wideout has found the end zone four times this season and leads the Rams with 39 receptions.

Williams has already notched three 100+ yard receiving performances this season, including a career-high 188 yards on nine receptions against the University of Hawaii.

Johnson, a junior who has worked his way up in Coach Mike Bobo’s system, also resides in the top 10 in receiving. The Lakewood, Colorado native’s 436 receiving yards are the 10th best in the FBS.

The senior has scored four touchdowns this season as well and has accumulated over 100 receiving yards in both CSU’s first and most recent game. Johnson has already tied his career-high in touchdowns set in 2016 and is well on his way to setting a new career record in receiving yards.

Johnson’s current high in single-season receiving is 613, which he set two seasons ago.

Additionally, Johnson and Williams were recognized during the offseason by NFL.com. NFL Media draft analyst Lance Zierlein included both receivers on his top-10 wide receivers to watch list. Williams checked in at ninth while Johnson was listed as seventh.

The Rams will face San Jose State University on the road after a bye this week. The Spartans are 0-3 and rank dead last in the FBS in passing defense, allowing an average of 391.7 yards through the air per game. Look for Johnson and Williams to continue their productivity when CSU takes the field next.