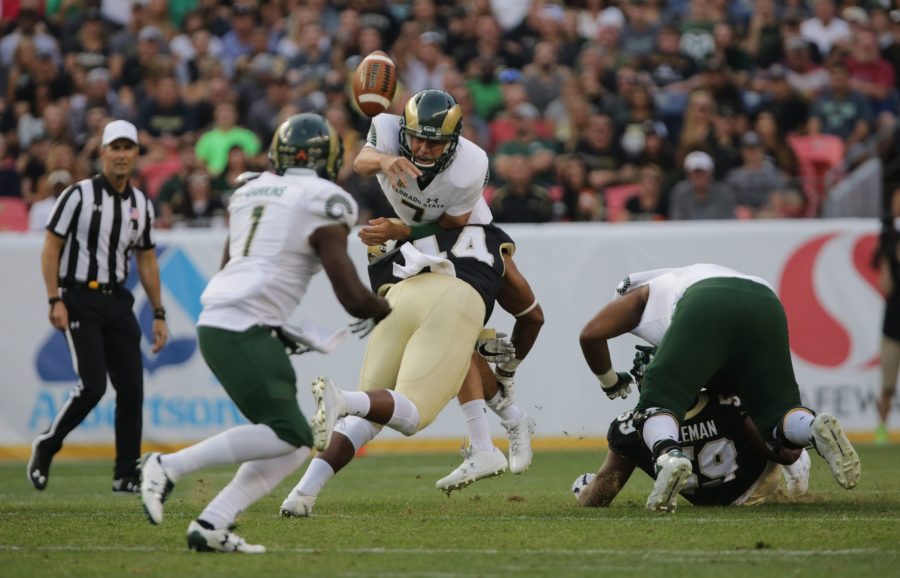 Quarterback Nick Stevens (7) is hit hard while throwing the ball to running back Dalyn Dawkins (1) during the Rocky Mountain Showdown. (Forest Czarnecki | Collegian)

The best part of the Rocky Mountain Showdown between Colorado State University and the University of Colorado is the world-class tailgating, considered the year’s top collegiate event in Colorado. The football on the field is much less appetizing.

With an all-time record of 65-22-2 in favor of Colorado, is it really a rivalry?

A rivalry is loosely defined as a “competition for the same objective or for superiority in the same field” according to the Oxford Dictionary. Both CSU and CU are both competing for the same goal, a tally in the win column, and a step forward towards a successful season.

The second part of the definition is where things get foggy for the Rams.

Superiority in the same field favors the Buffaloes in the same way a big brother picks on his younger sibling. The Rams have been consistently bullied in the rivalry and embarrassed in front of their largest crowds of each season, each game taking place at the 80,000-seat Mile High Stadium.

The rivalry has not always been played in such a large venue, but the point remains.

As the contract to play at the professional venue winds down, the games will begin to be played at each respective home stadium, creating a home-field advantage for the host each season as opposed to choosing an arbitrary home team each year at the neutral site.

Despite the lopsided nature of the opening matchups all the way back in the 19th century, I will stick to just the examples present in the last 30 matchups, starting with when the “rivalry” was resumed in 1983.

In that span, the Rams have actually had moderate success, winning eight of the 30 matchups, a resounding record of 8-22. The score differential between the two teams is 866-597 with the Buffs outscoring the Rams by nearly nine points per game. The rivalry in terms of record most relates to that of Louisiana State University and the University of Tulane (69-22-7).

Now when thinking of the LSU Tigers and Tulane, does anyone consider the matchup noteworthy?

The Tigers are a renowned Southeastern Conference powerhouse, housing the likes of current NFL stars Odell Beckham Jr., Patrick Peterson and Leonard Fournette as well as Hall-of-Famer Y.A. Tittle in terms of legends.

Though CU does not possess the same candor, the Buffs have housed much better teams year after year, with only the occasional contender from CSU.

In the bigger picture, the game may turn into the coach-killing variety as Mike Bobo continues to rustle with the lack of success in rivalries. Though three bowl games is a boon for the program, the fanhood that believes in the competitiveness of the non-competitive rivalry may run the leader out of town.

Losing Bobo for CSU would be a blow to the program as a whole. A steadying force, Bobo has put the Rams in the limelight, producing NFL talent occasionally, something that should be appreciated for an agricultural university.

Unrealistic expectations of the team have given the program a bad rap in recent years as pundits around the program refuse to give the school a break for being a group-of-five program going against a power-five program with a talent deficiency to show for it.

The days of the “rivalry” deserve to take a back seat.

The games that should be the focus for the program and its fans is that of the Border War or Air Force, much more realistic rivalries. Wasting time annually on a game that tips in favor of the Rams on very few occasions has lost value. The team needs to focus on playing the teams that steadily improve them, with an end goal of competing for a championship in their own conference.

Until the Rams are able to make it to a power-five conference, which is a lofty goal, the rivalry against the team across the way needs to be put on hold.