Zahlmann: A slight improvement awaits, but next year will show greatest growth 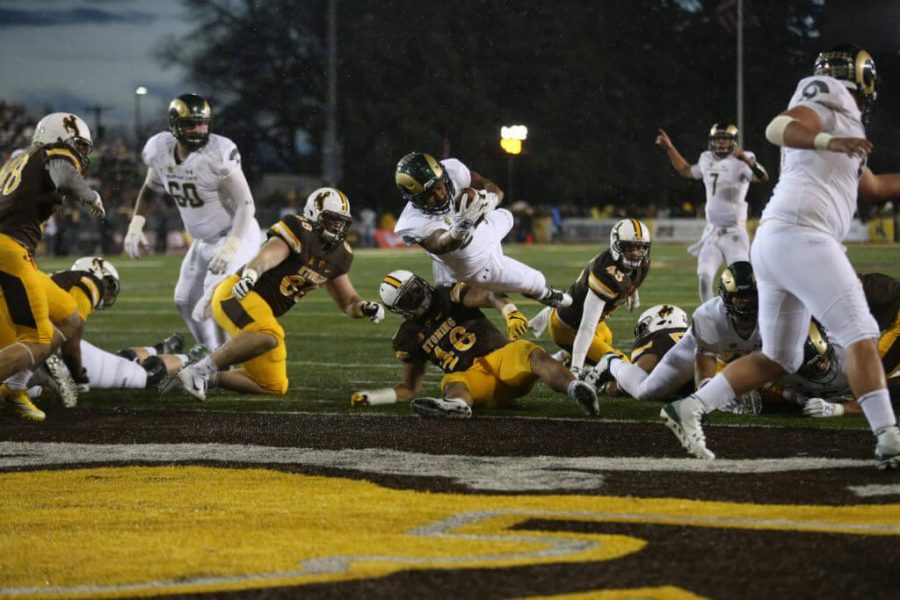 Colorado State Running Back Izzy Matthews makes a dive into the end zone during the second quarter of action on Nov. 4 against the University of Wyoming. (Elliott Jerge | Collegian

Average has been the tale, but a step forward awaits for Colorado State football.

Outside of their opening weekend against the Rainbow Warriors of Hawaii, the Rams will face a gauntlet of Colorado in the Rocky Mountain Showdown, Arkansas the following weekend and Florida in The Swamp as the cherry on top.

In the last 10 seasons, the Rams are 3-7 against the Buffaloes. Several lopsided scores to date, CSU has seen the rivalry between the in-state foes favor the team from the west drastically, an all-time record of 65-22-2 to show for it.

Previous personal optimism aside, the Rams, though riding winning seasons in the Mountain West, will succumb once again to their Power-Five opposition, falling in the Mile-High City for a fourth-straight year.

Coming out of the Showdown, the Rams will be riding a .500 record into their matchup against Arkansas, a game that stands as their third in a row to begin the year as the home team. Arkansas, though at times a southern mainstay, is going into a rebuilding season under Chad Morris. An offense that was inadequate last season will once again fail to outproduce the opposition allowing the Rams attack to overpower the Razorbacks.

The defense for Arkansas failed to perform at a much better than the offense, setting the team up to compete in high-scoring affairs with an offense that is inept.

Once again in their fourth matchup of the year, the Rams will face a perennial powerhouse in the past in the University of Florida, who also features a new leader. The difference between the Razorbacks and Gators in the level of coaching will be readily apparent as the Gators will utilize their home-field advantage and Dan Mullens to overpower the Rams.

A 2-2 record to start the year, the Rams will rally to string together a trio of wins against Illinois State, San Jose State and New Mexico, a pair coming at Canvas Stadium.

With two of the three matchups coming against inferior competition and the Rams starting to mesh, the Rams will begin to show signs of the offense they possessed last year, led by a better stable of receivers despite the loss of Michael Gallup as well as a reformed running back corp led by a a bruiser in the backfield in Izzy Matthews.

Back to earth the team will fall, taking a loss in yet another pair of “rivalry” games to both Wyoming and Boise State. Despite both teams losing their starting quarterbacks, the Rams will be unable to overcome the Cowboys and Broncos respectively.

The Rams carry a talented offensive team, but questions remain on the defensive side. Finishing as one of the worst in the country last year, the Rams have a long way to go to break even under new coordinator John Jancek.

K.J. Carta-Samuels, at least for the beginning of the year, will provide similar production to the departed Nick Stevens, with a lesser offensive line to support him. The skill positions will be present in bulk, but the offense will be relying on things to click on the offensive line early and often.

The season will look very similar to last with the Rams soaring on offense, with an improved, yet average defense in the first year under Jancek. This year will pose as a rebuilding yet competitive year, with Mike Bobo’s best work in the waiting for next year.