From Denmark to CSU, Hougaard-Jensen is all business 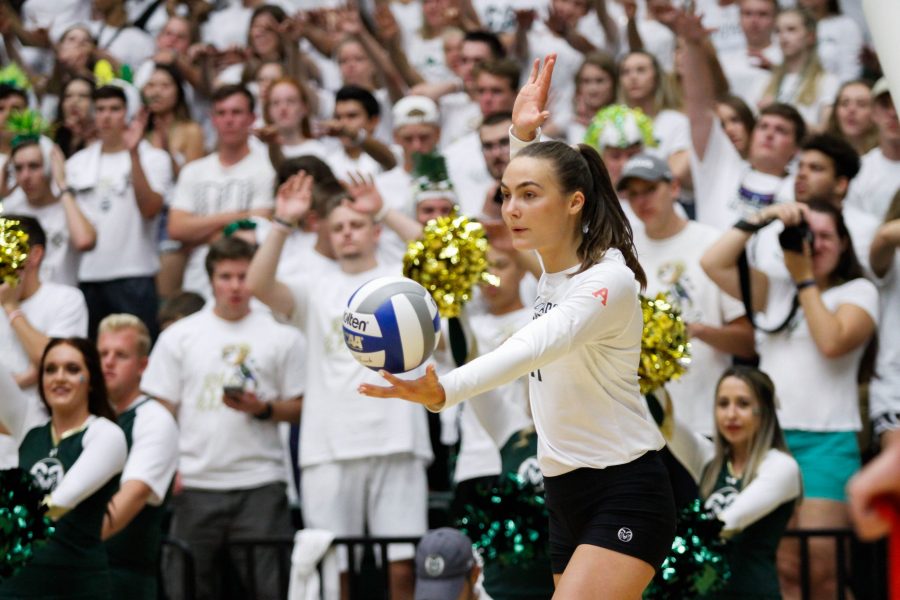 In the previous two seasons, Paulina Hougaard-Jensen has been exceptional for the Colorado State volleyball team. Unfortunately for opposing teams, she still has another two years to compete before finishing her college career.

The Copenhagen, Denmark native, has racked up accolade after accolade throughout her volleyball career.

In the middle of the 2015 season, after hearing from a few different connections, CSU Coach Tom Hilbert decided to check out the Danish prospect on film.

“I thought she was good on film but it’s hard on video sometimes to make a final decision, so I went over there (Denmark),” Hilbert said.

In Hilbert’s visit to Denmark, Hougaard-Jensen was sick and did not look the same, but to him, it did not matter as he invited her to Fort Collins anyway.

After a 15-hour flight, Hougaard-Jensen arrived at Denver International Airport, immediately in awe.

During her visit to Fort Collins, Hougaard-Jensen fell in love with Old Town and the university.

“Once I got here I was really excited about the town,” she said. “Obviously, Moby (Arena) was (like) nothing I’ve ever seen.”

With the University of Nebraska showing some interest as well, Hilbert was unsure about Hougaard-Jensen’s decision. In the end, she signed with CSU.

In her final season in Denmark, Hougaard-Jensen won first place for their senior national team at the 2016 Novotel Cup.

As a freshman, Hougaard-Jensen appeared in 20 matches for the Rams with five starts mixed in. She averaged 1.2 kills and 0.7 blocks per set in her limited freshmen campaign.

“Freshmen year I had a totally different role,” she said. “My role was if one of them didn’t play too well, I got to play…if they needed some blocking.”

Despite all the talent surrounding her, Hougaard-Jensen finished the season third on the team with 271 kills and ranked second in the nation with a hitting percentage of .474. Her season was solid enough that she was able to add another accolade to her list: 2017 Mountain West All-Conference.

“It’s a huge honor and I’m really excited about it since I got to share it with a lot of girls on the team too,” she said.

The Ram’s terrific season came to an end at the hands of Stanford University in the second round of the NCAA tournament but Hougaard-Jensen and the Rams have set even higher standards for this season.

“We should make it past the second round of the NCAA tournament (this year),” Hougaard-Jensen said. “I think this team can … build ourselves up this year.”

After the graduation of four seniors, and with no seniors on this years’ team, Hilbert will rely on the serious leadership style and experienced play of Hougaard-Jensen, along with the rest of the juniors on the team if the Rams want to make a run in the NCAA tournament.

Hougaard-Jensen earned the right to help lead the young Rams off-court by earning Mountain West Academic All-Conference and Mountain West Scholar-Athlete in her first two seasons. But, even as a leader, Hougaard-Jensen is still looking for ways to improve her own game to top-off last season’s campaign.

She’s looking to have more kills this season, become the full-time serving middle and improve her blocking.

“She’s ended up being everything we thought and more,” Hilbert said. “She’s probably one of the hardest workers, most dedicated, most self-driven people we got on the team.”

Collegian sports reporter Sergio Santistevan can be reached at sports@collegian.com or on Twitter @TheRealsSergio