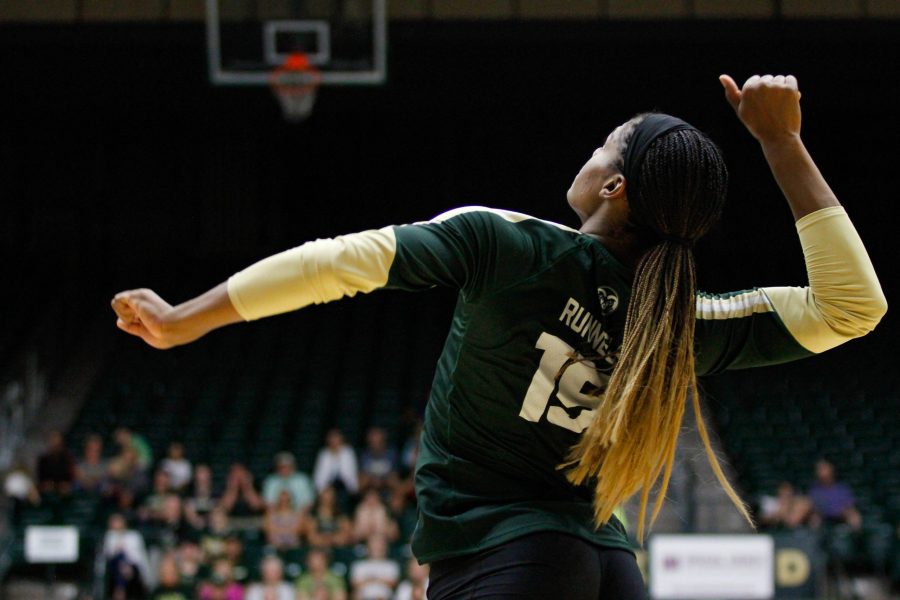 The Colorado State volleyball team went on the road for the first time this season and was tested by the University of Northern Colorado for much of the match. From the first whistle, UNC gave the Rams everything they could handle, but in the end, CSU swept UNC 3-0 (26-24, 25-20, 25-16).

Starting outside hitter Olivia Nicholson returned to the court for the Rams after missing the first two games due to injury. Coach Tom Hilbert says the whole team is better with Nicholson on the court because she can anticipate moves other players have a hard time seeing.

“I was a little nervous, I’ll be honest,” Nicholson said. “But once I get out there, it’s just like a day at practice or another game. I’ve done this my whole life.”

Coming into the matchup, the Bears and Rams had two common opponents in the University of Illinois and University of North Carolina-Wilmington and played those teams nearly identical in their respective matchups.

To start off the opening, CSU went up early 2-0 but quickly saw their lead disappear as UNC went on a 3-0 run. With the help of Paulina Houggard-Jensen and Jessica Jackson, CSU jumped out to a 12-8 lead. After constant back and forth action, UNC called a timeout trailing 18-13.

The timeout seemed to work in the Bears favor as they decreased the lead 23-21 and forced a CSU timeout. In the biggest call of the night, Tom Hilbert successfully challenged the referee’s decision with the scored knotted up at 23-23 to put the Rams up 24-22. An attack error by UNC’s Kortney Lockey helped the Rams come out the first set victory 26-24.

Errors stalked the Rams in the first set, with a total of five service errors and seven attack errors, but three service aces contributed to the opening set victory for the Rams.

“I think we started the match out with a little bit of jitters but this was really one of the better matches for serving for us this year,” Hilbert said. “As we settled down we maintained the streak that they were on.”

In the second set, the Bears continued to give the Rams problems. In the early going, UNC went up 8-6, but that was the last time they held the lead in the set. The Rams surged on a 12-7 run to jump out 20-13. A kill by Breana Runnels ended the set 25-20. Runnels contributed heavily in the second set as the Rams started to click, totaling 16 total kills on a .316 hitting percentage in set two.

“I think it was a collaboration, we need everybody on that team to make each player good,” Runnels said. “It was just a team effort. I think Katie (Oleksak) was putting the ball in a good location for me.”

While the Rams controlled much of the third set, UNC kept things close throughout. The Bears tied the Rams up at six before CSU regained the lead for the remainder of the set.

The Rams front attack proved to be too much for the Bears as a kill by Jessica Jackson set the Rams up with a comfortable 16-7 lead. With the momentum, CSU closed the match and the game out in a decisive 25-16 victory.

“We did some good things defensively,” Hilbert said. “There was a lot of things I was not pleased with. I don’t think we handled very well, especially down the stretch.”

CSU will be back in action on Sept. 1 in Moby Arena against The University of Cincinnati at 11 a.m. and Florida State University at 7:30 pm. to begin their three-game weekend tournament.