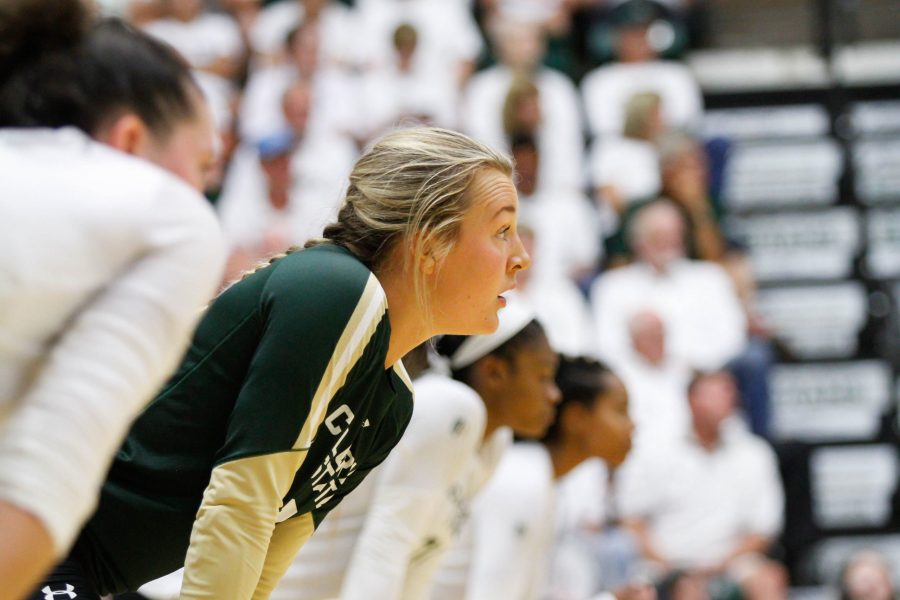 Amanda Young waits for the serve during the home opener against Illinois. After an intense game the Rams lost in the fifth set. (Ashley Potts | Collegian)

Despite holding the visitors to a negative hitting percentage (-.103) in the opening set, the Rams bevy of service errors were a catalyst for the opening-set loss. Seven service errors and four passing gave the Rams a total of 11 for the set, nearly half of the Illini’s total points.

Outhitting the visitors throughout much of the first and second set, the Rams were exclusively held back by their own mistakes. Letting the top-15 ranked Illini stay without shouting distance proved fatal for the Rams chances once their blocking force took over.

The Illini blocked eight attempts from the Rams in the first two sets alone, with a grand total of 13 in the match.

Despite the early woes, the Rams came out of the intermission focused, taking an early leading and holding Illinois to a donut in the hitting percentage column of for the first 15 points of the set. The hot start stemmed from slight adjustments in the locker room including the switch of Ellie Gubser for freshman Sasha Colombo, an upgrade to the Rams attack.

“We wanted to get offense instead of blocking,” coach Tom Hilbert said. “Katie only set her twice for the rest of the match but it seemed to make a nice chemistry change. (Also) had Paulina serve instead of Kirstie.”

The hardest fought set came in the third for the Rams where the team jockeyed for position, trading leads throughout. The third set also featured the longest volley of the match, tied 10-10, in which each team traded blows, with the Illini taking the point in the end on a diving attempt by both Amanda Young and Breana Runnels, both unfruitful. The volley served as a summation of the match as a whole for the Rams: despite their best efforts, their mistakes sunk them in the end.

Fighting for the match, the Rams rattled off seven consecutive points to seal the set 25-18. Blocking and a clean-up of their previous errors allowed the Rams to turn the match around out of the break. A rocket from Runnels served as a sign of things to come as the Rams clinched the third.

“My focus is to just play each point as it is,” Runnels said. “Don’t focus on the last one, move forward. I think the team has put trust in me and I need to perform for them.”

The cleanest set of the match for each squad came in the fourth. Despite both top-25 foes showing rust and bouts of sloppiness early, the pendulum set served as the highlight reel. The superior play came in lieu of the teams hitting a combined .305. The Rams allowed Illinois to fight back to tie the set 25-25, but eventually pulled away, finalizing the set on a service ace from Paulina Hougaard-Jensen.

Moby Madness was unable to overcome the visitors from the east in the end as the Rams fell susceptible late to a relentless attack from the Illini.

The match kept its storyline of drama when the Rams challenged the final call to the applause of the record-breaking attendance of Moby faithful. The call stood, despite being a toss-up with expletive calls from the crowd to boot.

Runnels made her impact felt in her first match taking over for Jasmine Hanna however. The 17-kill performance, a team-high, caught the full attention of Hilbert.

“I thought this was one of the best matches (Breana Runnels) has ever played,” Hilbert said. “I think that she does have that attitude that that’s her job. She is now stepping into this huge role for us. She did everything well including serve receive.”

The Rams will play their second match of the season against a slightly lesser squad in UNC Wilmington tomorrow at 11 a.m. The new rankings at the beginning of next week figure to see the Rams drop out pending the results around the nation in the opening weekend.