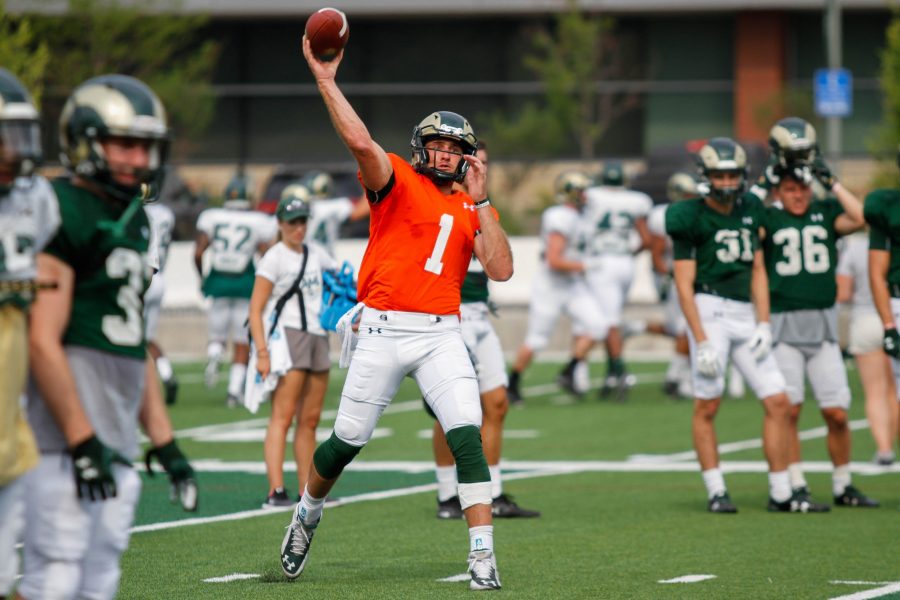 K.J. Carta-Samuels makes a pass during a drill at practice on August 2. (Ashley Potts | Collegian)

Going into the season with relatively low expectations, the Colorado State football team is an interesting young team with a wide variety of possible outcomes.

There are four games on the schedule that the Rams should win, with only two games they should lose. Everything else is up in the air. If K.J. Carta-Samuels, or one of the other Rams’ quarterbacks plays well, it could be a strong season.

The season starts on Saturday, with the University of Hawaii at home. This season does not figure to be much better than last year’s 3-9 for the Rainbow Warriors. Both the offense and defense were outright bad. This should be a confidence builder for the Rams going into the next game against the University of Colorado in the Rocky Mountain Showdown.

The Buffs are in an ongoing rebuild. The run defense was terrible last year and the Buffs lost two key cornerbacks on top of that. The Rams could establish the run game and then hit the outside. One key will be if a developing defense can contain Philip Montez. The Buffs are trying to be more up-tempo in their offense but may struggle with the loss of multiple skill-position players.

These games should be a very good gauge for where the Rams fall in terms of offense. Wide-outs Olabisi Johnson and Preston Williams have a chance to be next in line in the Rams’ recent run of greats at the position. Quarterback is the question mark.

It is best not to think too deeply about the SEC match-ups the Rams will have after the showdown. The University of Arkansas was not very good last year, especially on defense. If things are clicking for the Rams on offense, this could be a shootout and a winnable game.

The University of Florida may be a different story.

The Gators should have a capable offense and one of the strongest defensive fronts in the SEC East this year. This is the most likely loss for the Rams after four games.

Following Florida, the Rams have three games that they should win. The Rams will face an FCS opponent, in the Illinois State Redbirds, they should win that. The next two against San Jose State and the University of New Mexico feature teams both rebuilding and adjusting after terrible years.

The Rams have the benefit of playing most of their easiest games early, with a few upper level opponents thrown in. However, none of the Rams last five games look like sure wins.

The Rams start with Boise State, who many are picking to win the Mountain West. With so many question marks on the Rams, including a young and changing defense, it would be hard to say the Rams have a good shot at winning in Boise. The three following games will loom big for CSU’s bowl chances.

The Border War should be interesting as the biggest questions for both teams going into the season is the quarterback position. The University of Wyoming’s defense has a chance to be remarkably good in its third year under coach Craig Bohl. If the Rams are anything like they were last year on offense, with the Cowboys struggling at QB, it could be another classic.

The University of Nevada looms following the rivalry. They lost a lot of games by small margins last year and return key players to an offense that could put up a lot of points. This should be a competitive match-up and one the Rams’ will likely need a win in.

Utah State may be the second-best Mountain West team the Rams will face this season. Last year, they lost three games by one possession. This year, they return much of a decent defense from last year. They have very big receivers on the outside with speed guys in the slot. The Rams will likely be underdogs coming in.

The Final game of the season is at Air Force who comes back with their usually solid run game and a defense that ranked 101st in points allowed last year. This game could come down to who is better at dictating tempo, with the Rams running a pro-style offense, juxtaposed by the Falcons utilizing the option.

If the quarterback play is solid, the Rams offense should be good all around with the defense being more focused and aggressive than last year.

An absolute worst-case scenario for the Rams is if the offense does not come together.

Mack Beaulieu is a reporter and columnist for the Collegian and can be reached online at sports@collegian.com or on twitter @Macknz_James