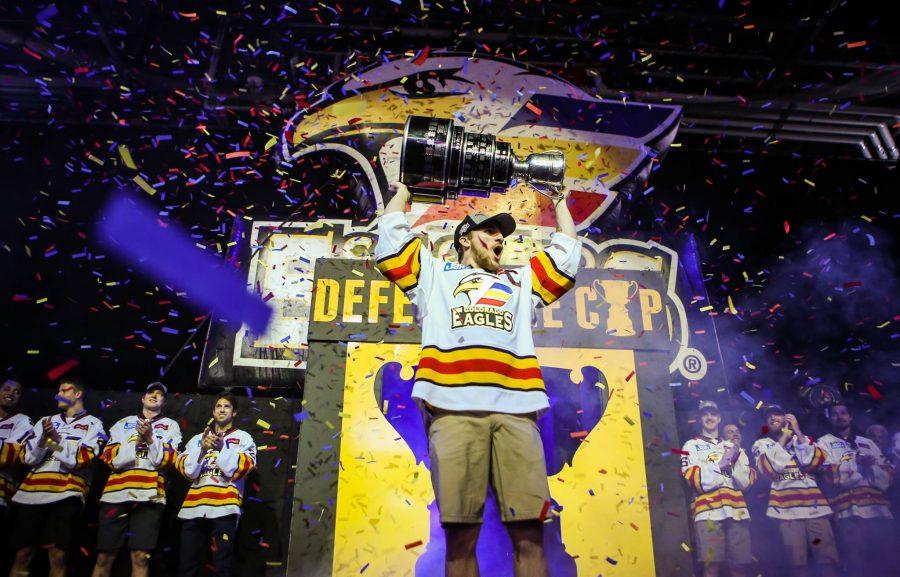 Colorado Eagles captain Matt Garbowsky lifts the Kelly Cup above his head during a fan celebration event at the Budweiser Events Center. The Eagles won the East Coast Hockey League championship for the second year in a row and celebrated by presenting the trophy to fans and signing autographs. (Photo Courtesy of Tony Villalobos-May | Colorado Eagles)

Editor’s note: Tony Villalobos-May is employed as an intern for the Colorado Eagles.

I didn’t quite understand the hype about sports, until I started working in them.

Last fall, the digital media director of the Colorado Eagles came to a Collegian photo desk meeting, looking for photography interns to shoot the current season’s team. My only real sports experience by that point had been shooting a couple of CSU football games where I would text dozens of questions to then-Collegian sports editors Justin Michael and Colin Barnard, I still have no idea how they dealt with me.

But while my group of photographers was being told about the joys of hockey, I was experiencing some strange flashbacks. As I stood there listening, the next thing I knew, I was 10 years old again, feeling the chill of the hockey rink and hearing the roar of a crowd surround me, as I watched a previous incarnation of the Colorado Eagles walk away victorious.

I remembered being there, and being scared, confused and filled with electricity as I watched everything unfold. I remember being exhilarated.

And thanks to this random walk down memory lane, that screaming crowd soon became second nature to me.

I applied for the internship, promised myself I would learn more about hockey and to understand what the big deal about sports was, a concept that had always eluded me. And the moment I dipped my toes in the water, I was caught in the current.

A few games of confusion later, I remember the first time I was caught in the heat of the moment.

I finally was able to learn the rhythm of the hockey fans’ movement, when they would most likely yell, when they want a picture of them taken and when I should absolutely not take my eye off the puck, even if it took a light puck to the forehead before I learned this last one.

That night we were supposed to be getting ready to shoot photos of fireworks. Therefore, trying to plan those shots was all that was on my mind. I turned my back for just a second, and then I started hearing yelling.

I loved it. That was the first time I felt like I could relate to the roar of the crowd instead of trying to ignore it. As the fighting died down and the game continued, I finally felt like I could feel the pulse of everything around me. And from that night on, I loved what I saw.

Being a team photographer allowed me to express a lot more emotion than if I was a journalist working at the event. Journalists can’t root for teams, they can’t have a bias. But as a team photographer, I did my best to embrace the energy around me, and I think that allowed me to grow comfortable enough around the players, causing them to loosen up.

Years of my grandpa trying to force me to watch football hadn’t done the trick, but one electrifying trip with a hockey team did. I didn’t want to leave. Playoffs came and went, and my affection for the sport kept increasing.

I remember, for the first time, actively putting on the Stanley Cup and watching Ovechkin freak out with the cup. I remember feeling like the luckiest guy in the world when I had the opportunity to cover a Colorado Avalanche game. And more importantly, I remember the last major event the Eagles hosted.

It was simple. They hosted a championship party for cancer survivors from UC Health, the coaches came, one player came and most of the office staff were there to celebrate as they popped open dozens of bottles of sparkling cider.

They said it was to celebrate winning the Kelly Cup, but I think it was a wonderful moment of celebration where they opened up their doors to a group that achieved an even greater victory.

If I hadn’t done this internship, I think I would be lost in confusion over the public’s obsession with sports. But I’m doing my best to learn more, photograph more and do more, because in everything else I have photographed, nothing has quite evoked the same raw, untouched emotion that I saw there.

Collegian Photo Director Tony Villalobos May can be reached online at photo@collegian.com or on Twitter @TheTonyVM.