Watch out for CSU’s rejuvenation under Medved 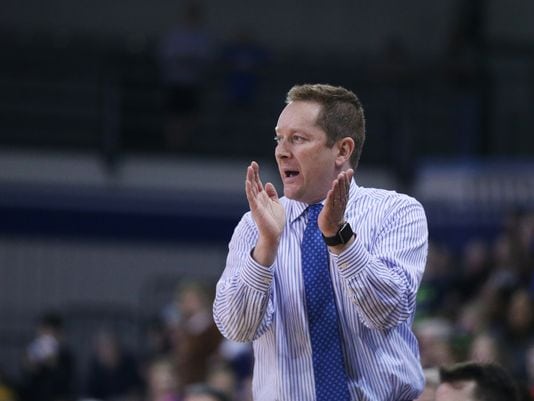 Niko Medved calls out a play during the first round of the CollegeInsider.com tournament game between Drake University and Abilene Christian University on Monday, March 12, 2018, in the Knapp Center. (Kelsey Kremer/The Des Moines Register)

A dream job forced the hand of new men’s basketball coach Niko Medved to journey from Drake University to the mountain ranges of Fort Collins, and the program will not only recover, but thrive in the aftermath.

The first step along the path for Medved was to acclimate himself with the returning Rams, building a path to minimal turnover from a roster perspective. Keeping dominant big man Nico Carvacho as well as guards Kris Martin and Anthony Bonner was a big step for Medved. Though Martin and Carvacho looked to move elsewhere at the onset of the offseason, they will both be suiting up in green and gold for the 2018-2019 season.

Key contributors remaining with the program was a big move for a team looking to compete in the rigorous Mountain West with Carvacho coming off his best season as a Ram, averaging a near double-double for the season, with an increase in production in the conference season.

The loss of leading scorer Prentiss Nixon, who moved on to Iowa State, will sting. As one of under 30 players for the Rams to have 1,000 career points, Nixon leaves a legacy as a Ram for better or worse as a scoring threat from all areas of the court. Fortunately, Medved was able to replace the losses with point guard Kendle Moore, along with the addition of a pair of forwards in Adam Thistlewood and Jack Schoemann with Thistlewood posing as the first Colorado player to commit to the program in half a decade.

Alongside convincing his standouts to stay put, Medved was also tasked with creating a coaching staff that fit his vision of collegiate basketball in Fort Collins, a duty that was fulfilled soundly. The hiring of Ali Farokhmanesh was a big step toward continuity for the former Drake head coach as Farokhmanesh helped the rebuilding of the Bulldogs as well. A former pro in Europe, Farokhmanesh has a solid foundation of knowledge and has shown an ability to mesh with Medved, as well as a potency for recruiting as shown with Thistlewood’s commitment; a big plus for the upcoming season.

Medved also brought assistants JR Blount and Dave Thorson to round out his staff. With the inclusion of assistants from Drake, Medved will be able to continue the trend set at his former job, and attempt yet another accelerated rebuild.

Success off the court has proven to be of vital importance to Medved as well as he seeks to erase the memory of silence from the program under coach Larry Eustachy.

Medved has gone to greet fans multiple times, exemplified with media and fans alike at the CSU Green and Gold scrimmage. The inclusion in the activities of other programs along with students will go a long way towards filling the stands of Moby once again and revitalizing the acclaimed “Moby Madness.” The return of a true home-court advantage can grow the program’s success on and off the hardwood.

With the recent announcement of the conference schedule, the Rams are slated to begin their conference season shortly after the new year on Jan. 2 with a matchup in Las Vegas, their first trip back to Sin City following their first-round exit in the Mountain West Tournament.

Along the way, Medved will also be faced with the Martin twins in Nevada once again as they return for their senior seasons, as well as the rest of the top-heavy Mountain West conference. Though he will be tested, Medved has worked wonders elsewhere and plans to continue the trend at the helm of the Rams.

The Rams will only be tasked with facing San Diego State Aztecs once, with the San Jose Spartans being the other unbalanced portion of their conference schedule. Though their trips to the west coast will be lessened, the Rams received a lucky draw with the Aztecs being featured only once.

From the beginning, Medved has brought his charisma in the face of adversity, with his colors of competitiveness shining through.

“My goal is to build a program that is seen as one of the best programs in the Mountain West, that can contend year in and year out,” Medved said in an interview with Reporter-Herald writer Sean Star.

Medved has the right staff, the right core of players and the right mindset to turn the program around. This would be a feat that will land the Rams in the upper-echelon of the conference by mid-season, a deep run in Vegas awaiting them.