The Rocky Mountain Collegian • May 22, 2018 • https://collegian.com/articles/sports/2018/05/rams-beat-bears-on-thursday-falls-again-to-jackrabbits-to-finish-nisc/ 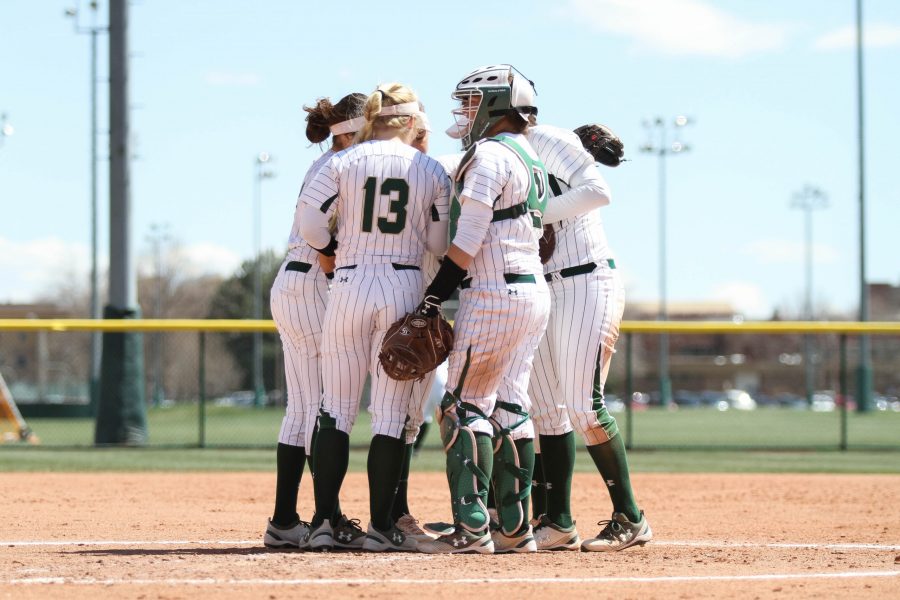 The Colorado State softball team (27-23) played it’s final two games of the season on Thursday in the National Invitational Softball Championships as they beat the University of Northern Colorado (28-28), but lost to the South Dakota State Jackrabbits (36-17) for the second time in the double elimination tournament.

The Rams fixed most of their problems from Wednesday against the Jackrabbits. Bridgette Hutton came back strong and the Rams provided early run support, but they weren’t able to hold on in the second match-up of the day and the Jackrabbits eventually overpowered them.

The Rams got the scoring started off early in the first game against UNC. Amber Nelson walked and Haley Donaldson singled with one out to put runners on first and second when Corina Gamboa came to the plate and singled Nelson home. After a pop up from Lauren Buchanan and having not been able to score much recently, the Rams thought it was time to take a risk with runners on first and third.

“We’ve struggled to score so much in the last few games that even with Gamboa not being the fastest, I thought it was worth the risk,” Coach Jen Fisher said.

Gamboa took off for second and the Bears catcher bit on the tricky Rams’ play by throwing to second, the throw was high though and Donaldson was able to steal home and give the Rams a 2-0 lead. Isabella Navarro flied out on the next at bat, but the Rams finally gave Hutton an early lead and she didn’t give it back after having one of her worst outings of the year the day before.

“Hutton looked really solid she just got off on the wrong foot (on Wednesday),” Fisher said. “We pulled her quicker than we ever had, but she came back strong, they had a lot of trouble squaring her up and she did a really nice job of limiting big hits. She also had some great defense behind her.”

The Rams added another run in the second when Ashley Michelena drove in Hannah McCorkhill, but Hutton’s pitching ruled the game as she pitched another complete game in the 3-1 win. The All-Mountain West Pitcher gave up just four hits to go along with the one run and gave the Rams a chance to go against the Jackrabbits once again.

Having lost their game to Loyola Marymount, the Jackrabbits started the game the way the Rams had hoped. Madison Hope was on the mound, even though the Rams were almost shut out by Hope the day before they felt they were on the verge of figuring the pitcher out. It seems they were right about that.

Overall, we gained some good experience and it was good to see them leave on a high note.” Coach Jen Fisher

After the Rams went down in order in the first, some of their big hitters came up and knocked Hope out of the game.

Four straight singles and some aggressive base running allowed the Rams to score three runs in the top of the second. Meanwhile Alison Petty was holding a strong Jackrabbits team in check for three innings.

“She was really throwing well and getting out of some trouble to start,” Fisher said. “With a really good hitting South Dakota team, they just started to figure her out the third time through the line-up.”

In the fifth inning, after giving up one run in each of the previous to innings to make it 3-2, the Jackrabbits finally managed to break things open against Petty and Hutton.

Hutton came on to relieve Petty in the fifth inning after she had walked the inning’s first two batters and, after Hutton walked the first batter she faced, the bases were loaded. After a strikeout, the Jackrabbits singled in the tying run and kept the bases loaded. A sac-fly gave the Jackrabbits the lead during the next at bat and three more runs would come around to score before the Rams caught a Jackrabbit trying to advance to second on an RBI single to bring the score to 7-3.

“She’s never really been in a reliever role,” Fisher said. “I think it was a difficult thing to ask her to do and I think she handled it well.”

Hutton held the Jackrabbits scoreless in the next inning, but the damage was irreversible with the Jackrabbits’ Taylor Compton throwing six perfect innings after the Rams jumped on Hope.

Even with the loss, it was a successful experience for the Rams, who were playing in their first postseason since 2003.

“Overall, we gained some good experience and it was good to see them leave on a high note,” Fisher said. “There was some great buzz around that tournament, the NISC, and we gave our younger players a taste at what the postseason is like.”

Mack Beaulieu is a reporter for the Collegian and can be reached online at sports@collegian.com or on Twitter @Macknz_James