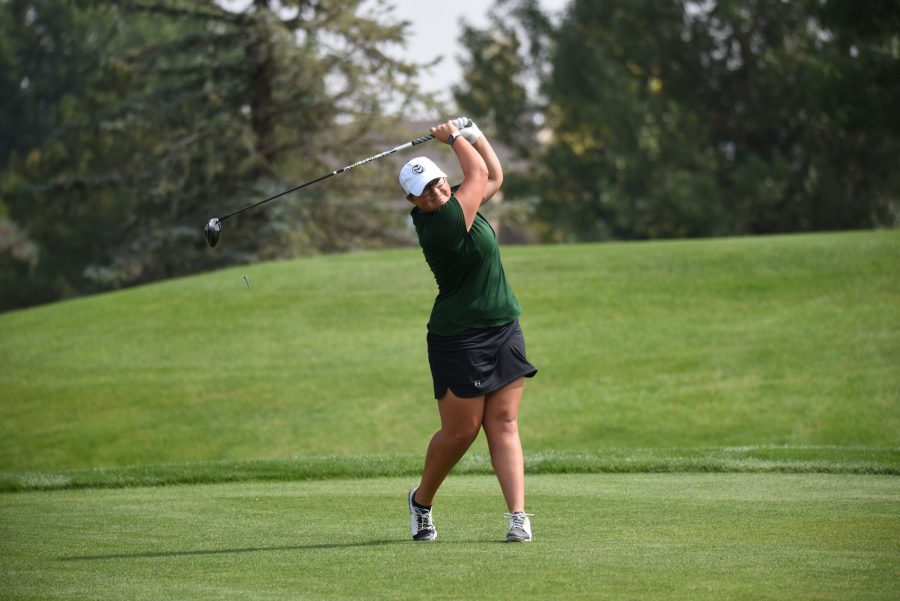 Sophomore Ellen Secor takes a swing during the fall season in 2017. (Photo courtesy of CSU Athletics)

Colorado State women’s golf had their season come to an end as the pair of individuals that were sent to the 2018 NCAA Tournament regional round in Austin, failed to make the cut to move to the championship. Katrina Prendergast and Ellen Secor finished the Austin regional tied for 24th and 69th overall respectively. A top-three finish was required to advance.

Secor put herself in a hole on the first day, while Prendergast kept herself near the top throughout, before fading slightly on the tournament’s final day. Secor came back to post respectable days in the latter two rounds, but it was not enough for either to move on, as none of the six individuals at the Austin regional scored in the top-three overall for the regional tournament.

Playing as a pair in the first day, Prendergast came out very strong with a one-under over the front nine. By the time Prendergast had made it to hole 16, she was at three under and tied for first in the regional but stumbled over the last three holes and shot four over in the stretch to finish the day at 1-over 73. Meanwhile, Secor shot eleven bogeys on her way to a 10-over 82.

The second day was a better finish for Prendergast while Secor also regained her form. No longer playing together, the two climbed up the board from their 32nd and 91st place ties on the previous day and both dropped their scores.

Prendergast recovered nicely from her disastrous last-three holes on day one by shooting a 1-under 71 for the second day. She only had two bogey’s in the round and was at or below par all day in her efforts to move up the leaderboard to a tie for 18th. Secor was much better throughout the second day, recording three birdies, including two on the first two holes of the back nine to improve her score by eight strokes to 2-over 74 and climb twelve spots to 79th overall.

The second day would prove to be the most successful for the Rams as both players saw their scores rise over the course of the third day, with Prendergast having her worst day of the tournament.

It was the final stretch once again that stifled Prendergast, she was even or below par throughout the round before shooting three over on her last four holes. She finished the round at 3-over 75 to finish the Austin Regional round at 3-over for the tournament.

Secor continued her upward climb after an uncharacteristically bad day during round one, climbing the board by nine more spots while shooting a 4-over 76. After a double bogey on the first hole of the third round, Secor’s consistency landed somewhere in the middle of her first two rounds as she exchanged bogeys, birdies and pars throughout the third round on her way to a 16-over 232.

While the Rams were not able to put up the scores to advance, the tournament took an unfortunate turn when coach Annie Young was hospitalized from a mysterious virus that ran through competitors and coaches in the regional round.

Due to NCAA rules about player media availability after the conclusion of the season and Coach Young’s ongoing sickness, no members of the CSU women’s golf team were available for comment.

Mackenzie Beaulieu is a sports reporter for the Collegian that can be reached at sports@collegian.com or on twitter @Macknz_James