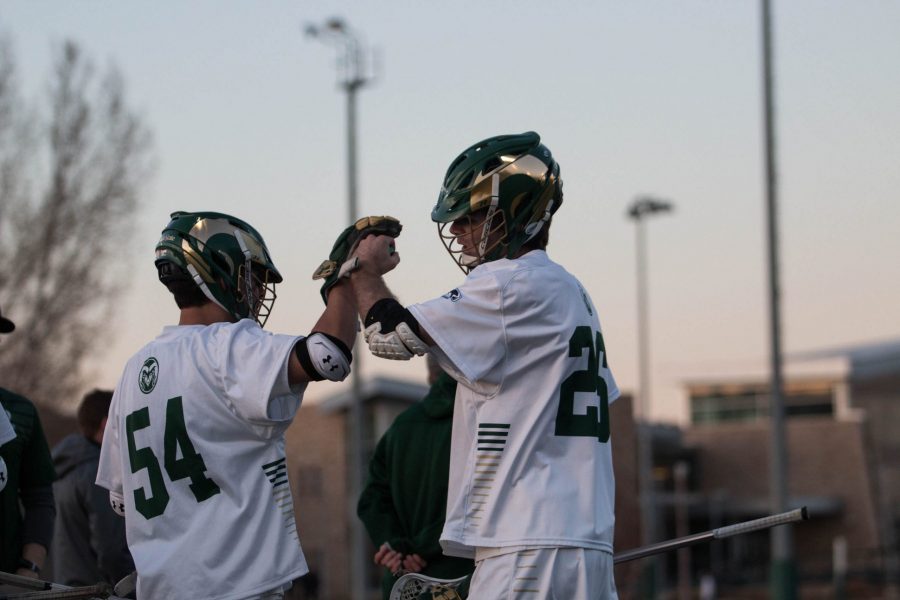 Connor Bergmann, freshmen, fist bumps Grant Breeden after coming off the field during the thrid quarter. CSU lost to Cal Poly with a score of 9-7. (Julia Bailey | Collegian)

The CSU men’s club lacrosse team took on No. 1 Utah in the Rocky Mountain Lacrosse Conference Tournament Saturday in search of an upset win against the top-seeded Utes, a game in which their efforts came up short.

As the game began, the Rams got off to a rough start. The Utes scored three goals in the first six minutes of the game. With the Utes having home-field advantage and a three-goal lead early, the momentum was on the side of the favorite.

The Utes would add another goal with four minutes left in the first quarter. Down four goals, senior attacker AJ Stewart continued what he has been doing all season long and hit the back of the net, putting the Rams on the board and making the score 4-1, Utah.

Although the Rams scored, the Utes came back and got another goal, bringing the tally to 5-1 after the first quarter.

With all the momentum on the Utah side, the Utes began to run away with the game. They added another five goals in the second quarter making the score 10-1 at half. Nothing went right for the Rams in the opening half, with halftime being a regrouping opportunity.

“Utah came out with more intensity,” freshman midfielder, Grant Breeden said. “We made some errors early and they capitalized and got a lot of momentum. Coaches did a great job of preparing us, but as players we didn’t execute.”

With the third quarter underway, the Rams continued to struggle to score. Despite getting opportunities to score, the Utes defense and goalkeeping played really well held the CSU attack at bay.

Utah added two more goals in the third quarter, with a similar two goals in the fourth quarter to make the score 14-1. Even though the Rams were down a huge margin, they fought hard until the end, similar to what they have done all season.

Breeden gave the Rams their second goal as he found the back of the net with three minutes left in the game. Stewart scored his second goal of the game with two minutes to go to make the deficit 14-3. Breeden followed with yet another goal of his own in the final minute of the game to bring the final score to 14-4.

The final horn sounded and the game came to an end.

The Rams fought through adversity all season long and they stood together as a team and kept fighting through thick and thin. This showed how close they were and how much they much they wanted to succeed.

“The adversity we faced was never ending,” Stewart said. “Although we didn’t play our best lacrosse, we stuck with each other … It was a great learning season for everyone and next year we will be better off.”

Although the season did not end the way the Rams wanted, there are many positives to take away from this season. They are excited to get back to work and come back stronger as a team next year.