The Rocky Mountain Collegian • May 14, 2018 • https://collegian.com/articles/sports/2018/05/csu-continues-slide-against-unlv-before-closing-day-win/ 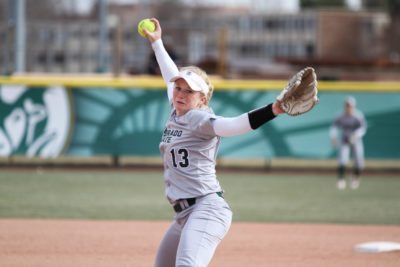 Junior Bridgette Hutton throws a pitch during the game against Utah Valley on March 9. The Rams beat the Wolverines 5-3. (Ashley Potts | Collegian)

The Colorado State softball team continued its end-of-the-season slide as it finished up the season at the University of Nevada-Las Vegas over the weekend. The bats were quiet while the Rams lost the first two game of the series, with a moral victory coming in the form of their final game win.

Aside from a rough first inning in game two, the Rams pitching was solid throughout the three-game series. Aside from a couple seniors however, the Rams never really got going from the plate. With their ace throwing another complete game in the third game, a few senior swings were all the Rams needed to save themselves from a sweep.

UNLV got the first game started early against Bridgette Hutton, getting three runs in the bottom of the first. The Rebels first two runners singled and the third doubled them home to drive in the first two runs, after striking out the next two batters, Hutton gave up another double and allowed the inning’s third run to score.

“They jumped on her,” coach Jen fisher said. “But I think the coaches kind of took responsibility for that one, she put the pitch where we wanted it, but I think (the batter) was ready for that pitch on the two-run RBI, I think that was a bad call on our part.”

Hutton mostly settled down for the rest of the game, only allowing two more runs in the fourth inning when the rebels led off with a double and followed with two singles to score a run. They came around to score again, on a wild pitch, before Hutton got a ground out to end the inning at 5-2.

That’s where the score remained as the Rams scattered hits all day against the Rebels ace Janine Petmecky, only getting two runs on a Hannah McCorkhill home run in the fifth.

“(Petmecky) really did a nice job working the umpire’s zone and she was really pushing the outer limits of the zone,” Fisher said. “We struggled to get solid contact with her, we just couldn’t square anything up.”

The next game was not any better for the Rams, as the Rebels came out swinging early against Allison Petty by putting up seven runs against the starter and one against Kaylynn Pierce. Pierce came in to relieve before the first inning was over and gave the Rams a respectable 4.2 innings pitched, giving up three more runs on the day.

“(Petty) just wasn’t sharp with her curveball,” Fisher said. “When she’s on with that curveball she’s really tough to beat and she just wasn’t sharp with it, she wasn’t getting it called for a strike, it was out of the zone. She gets good movement, so sometimes its almost moving too much… its a good problem to have, because she moves the ball really well, its just a matter of her being more consistent with that.”

Due to NCAA mercy rules, the clock was ticking for the Rams to close the gap to less than eight by the fifth inning. Sarah Muzik and Madison Kilcrease answered the call in the third, with an RBI a piece to make it 8-2 going into the bottom of the third. In the end it was still a Rebel win by mercy rule as they came right back in the bottom of the frame with two runs of their own. The Rebels added one more run in the fourth to end the game 11-2, after five innings.

After two bad losses in the series and a season-worst seven-game losing streak, it would be up to Hutton and a red-hot senior to try and end the season on a positive note, a task in which they delivered.

After having many great starts this season, Hutton gave one of her best against a strong UNLV team by only giving up four hits and one run over the course of a complete game. With only two strikeouts in the game, the junior masterfully pitched to contact and the defense backed her up throughout.

“UNLV was really on a run these last nine games,” Fisher said. “So for her to be able to shut them down offensively, just showed she’s a strong pitcher in our conference… I think if we get Petty a little more consistent and we add maybe one more, we have a freshman and a transfer coming in next year, so if one of those two or both of them can help with some innings we have a chance to be really strong again.”

Kilcrease, a senior who came into the game 10 for her last 20, added two more hits in this game with two RBIs. The first coming when she drove in Jordan Acosta in the bottom of the second inning and the next when she drove in Hannah McCorkhill, who had doubled in what is likely her last game as a Ram.

“Hannah loves the game,” Fisher said. “It was good to see her this weekend have a really strong finish, she played great defense and did a nice job at the plate so I was really happy for her… same with Madi she’s been a real steady player for us for four years, so I wouldn’t expect anything different from her, but you know I think she had a good time and enjoyed her teammates. She really made a difference.”

The Rebels got their lone run in fifth after their first two batters reached on singles. After a fielder’s choice left runners on first and third, Hutton allowed a sacrifice fly to make it 2-1 before getting a ground out to stomp out any chance at a Rebels’ run.

After that, Kilcrease pushed McCorkhill in for an insurance run to make it 3-1 and Hutton got six of the last seven batters out to assure that the game, series and likely the Rams’ season were all over.

After an up-and-down season where the Rams’ made waves both on and off the field, it is a bittersweet ending for a team that truly played together all season.

“One thing I’m really proud about is we had a couple of kind of program-changing wins,” Fisher said. “We proved to ourselves we could beat some of those top-50 teams. Secondly, I think their leadership and their teamwork was really exceptional. They really worked hard together and I hadn’t had a team that had that strong of teamwork and I was really proud of that.”

The Rams did not hear their name called at the selection show, but earned a bid into the National Invitational Softball Championship as part of a 17-team field. Their first matchup will take place Wednesday at 3 p.m. as they take on South Dakota State in Greeley.

Mack Beaulieu is a sports reporter for the Collegian and can be reached online at sports@collegian.com or on Twitter @Macknz_James