Zahlmann: The stigma around cannabis only hurts the athletes 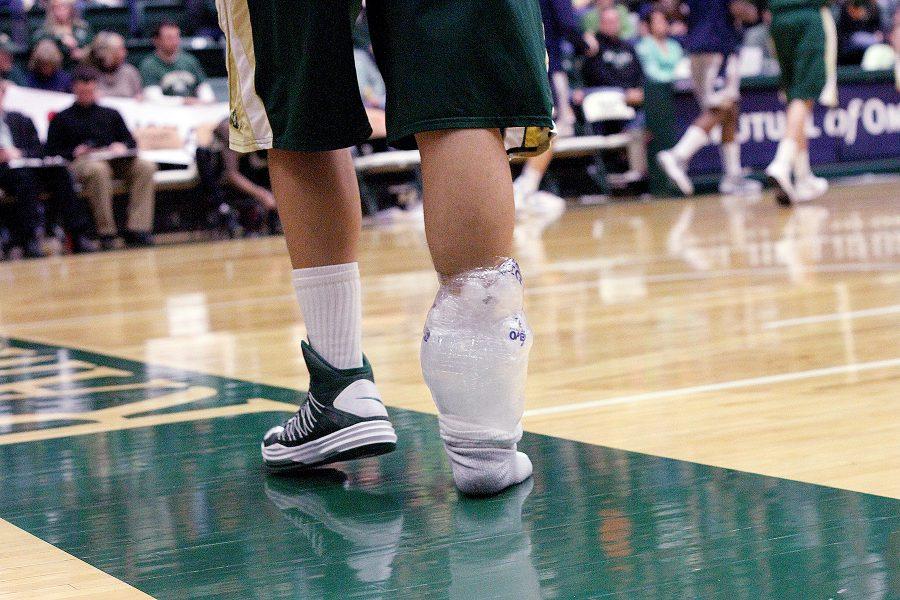 A CSU basketball player walks on the court with an ice pack taped to his ankle during a game in 2013. (Collegian file photo)

Once posed as a drug that is a gateway to serious substance abuse, the legalization of cannabis in various states across the nation has shown a change in thinking, one that needs to make its way to athletics.

Athletes are given a choice many times between addictive painkillers or no treatment at all. Rather than forcing athletes to risk being hooked on painkillers that can slowly disintegrate lives, an alternative for them should be cannabis, a more natural remedy.

According to a study by the American Society of Addiction Medicine, drug overdose is the leading cause of accidental death in the United States with over 50,000 in 2015 alone. The number driving the total is the 20,000 cases of prescription painkiller overdoses attributed to opioid use. Though the statistics are recent, the number figures to have only grown with the increase in prescriptions given out for prescription painkillers, a drug that is severely over-prescribed already.

The number of overdoses from cannabis, a drug that is frowned upon by many and said to have a negative effect on athletes, is zero. In their report of the facts about the drug, the Drug Enforcement Agency reported that there has not been a single overdose reported in the criminal history of the drug, despite belief that it can be lethally negative to users by those against the substance.

The main method of healing athletes is the one that has caused the worst side effect in existence in many, yet the stigma around the plant still exists.

In the United States, federally-funded universities are unable to legalize the drug to its athletes due to the illegal nature of it federally. States have been given the right to legalize their drug as they see fit, and the nation has spoken loudly for its legalization in all 50.

The only universities that can currently allow their athletes to legally partake in the substance are privately-owned establishments that reside in a state that has previously legalized the drug. The university is not allowed to take a single cent from federal funding in order for the circumstance to be in effect. Without all stipulations being met, no university is able to allow their athletes the freedom to go outside of the pharmaceutical world to heal their ailments.

A popular case in Colorado State University history was that of former football player Treyous Jarrells. Though illegal, Jarrells played most of his snaps for the Rams under the influence of cannabis in order to counter his pain that was a direct result of the sport.

“I practiced under the influence. I played games under the influence. This is my medicine,” Jarrells told the Coloradoan in September 2016. “I’ve seen players at CSU pop five, 10 ibuprofens before practice. Daily. You think that’s good? Over the course of two, three years, that’s eating your liver away.”

The act of taking extensive painkilling medicine to cure ailments can pose long-term threats such as the liver damage alluded to by Jarrells. The addiction can also raise the risk of heart attack over time. Both side effects are made worse by the addictive nature of opioid use and abuse of the substance in order to feel complete relief.

At the collegiate level, only championship events result in tests for the substance. The lack of testing results in players using the drug anyway, leaving themselves vulnerable when the highest level of competition, the championships, come to the forefront. A complete dismissal of non-performance enhancing drug tests is necessary to adapt to a world that has built a reliance on substances with deathly tolls.

Many athletes pose similar problems with pain associated to their sport. The only remedies that should be offered for these athletes are ones that serve as non-addiction elixirs for the ailment.

At the pro level, drug tests are administered randomly in some, regularly in others, to subdue the use of cannabis as a pain reliever. The fines and suspensions associated with drug use are used as a way to dissuade the act without taking legal action.

In order for the nation to change its view on drugs in athletics, the four major sports leagues in America – National Hockey League, National Football League, Major League Baseball and the National Basketball Association – need to change their stance first. The leagues have yet to completely allow use despite several past players in each league speaking out in support of the use of the drug to fight pain caused by the sport.

By making the use of cannabis legal within their sports, the professional leagues can convince the laws federally to change as well.

The argument that players will lack in performance reigns mute as well. With poor performance, players are let go or exiled to the bench without the use of drugs, so the same infractions can still serve a similar purpose. If players are seeing their performance affected, their playing time will be as well.

The product on the field will stay the same, while the aches and pains that athletes face off the field, when fans are no longer concerned, will subside.