Zahlmann: The leaders of CSU athletics are on a path to something special 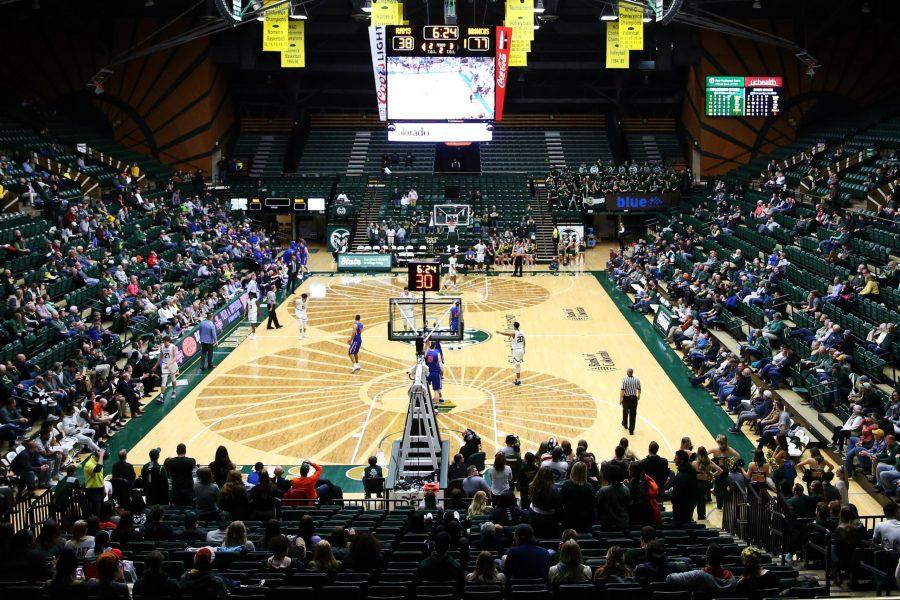 Moby Arena looks empty during the final minutes of a Men's Basketball Game against the Boise State Broncos on Feb. 21. About 25% of the seats are filled with fans scattered all over the arena. (Elliott Jerge | Collegian)

Moby Arena, given its name from the whale-like curvature of the venue, has a golden opportunity to bring in revenue for Colorado State University beyond a unique name, as proven by the football stadium naming-rights deal.

Colorado State athletics made headlines last week prior to their Green and Gold spring game with the announcement of a new stadium-naming rights deal with Public Service Credit Union, one that will net nearly $40 million over the next 15 years.

One of the most lucrative deals in the nation, CSU found a way to allow Sonny Lubick, Vice President of Community Outreach for PSCU and former CSU football coach, to once again put his stamp on the program, after naming rights for the field itself were given to him as well. A total north of $50 million for the naming rights package, Director of Athletics Joe Parker has brought revenue in beyond the wildest dreams of Rams faithful.

Founded over 50 years ago, the arena could use a revitalization, of which naming rights could help. As a still well-conditioned arena, the building itself should stay put, remaining a mainstay on the campus. Imagine what a multi-million-dollar endorsement could add to the facility.

Improvements to the interior of the stadium could go a long way to putting it near the level of the CSU on-campus stadium. Having already proposed a party porch, though not set in stone yet, the University is already looking to expand the entertainment value set in the arena.

Another proposed addition to the arena is the refurbishing of locker rooms for various teams, already being planned by Parker. The money received from a name-rights deal would go a long way to take the modifications a step beyond the original plan, giving the teams of CSU excellent conditions pre- and post-game in their prospective locker rooms. An upgrade to the locker rooms and facilities would not only help current athletes, but future recruiting endeavors as well.

The expansion of their reach for fans could also aid the University in hosting further large events similar to the concerts held such as Ludacris and The Rolling Stones. The addition of more events with the magnitude of some of their past events could add more revenue for the University beyond what they are already bringing in, furthering their abilities to provide athletes with the best facilities possible.

All of these additions and more would become possible in a shorter time span with the addition of a naming-rights deal for the arena.

A fellow Mountain West school with comparable facilities, the University of New Mexico, recently agreed to a deal with Dreamstyle Remodeling for $10 million over 10 years for both the football and basketball stadiums. This deal can serve as a benchmark for CSU in their search for a deal in naming rights for the arena.

If CSU can locate a local company that can take over the naming rights for the arena, they could bring in more than $70 million dollars to the university over the next 15 years. Few schools throughout the nation would be able to rival this level of partnership. Their rebrand of their men’s basketball program under the tutelage of recently hired Niko Medved could go hand-in-hand with the rebranding of their celebrated Moby Arena.

The large sum could go a long way towards putting CSU at the top of the conversation for inclusion in a larger conference as well. Moving to a larger conference would benefit CSU’s programs by infusing tens of millions of dollars into existing athletics programs. Having been denied their inclusion in the Big 12 recently, the Rams could put their stamp on a resume for a Power Five conference that would be hard for the nation to ignore.

Parker and his affiliates have done a masterful job accruing revenue from naming rights with the new on-campus stadium, a trend, that if expanded to their other major venue, could put CSU in the graces of some of the largest schools in the nation.