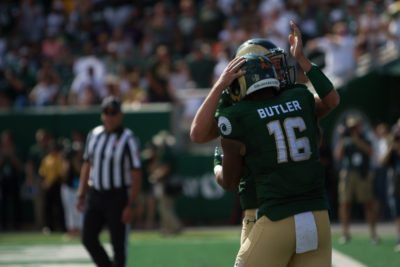 Learning curves accompany any player making the transition from high school to college football. Speed, physicality and scheme make the two games distinctive from one another.

For many college tight ends, the learning curve is amplified. Transitioning from big, athletic wide receivers in high school to multi-faceted tight ends in college is no easy task. At Colorado State, the continued development of a crop of young tight ends is proving crucial through the opening weeks of spring football.

Entering his true sophomore season, Cameron Butler is the only tight end on the roster with in-game experience at the position for CSU. Redshirt sophomore Isaiah Pannunzio and redshirt freshman Griffin Hammer are the two other tight ends in spring camp, making the position group one of the youngest on the team.

Butler showed flashes of potential during his freshman season in 2017. Serving as the second tight end behind Dalton Fackrell, he hauled in 12 receptions for 171 yards and three touchdowns during his freshman campaign, including a 50-yard score against San Jose State.

That said, Cox and head coach Mike Bobo know that the next step for all three tight ends, and the two true freshmen joining the program in the fall, is blocking. As the lead man in the position group as just a true sophomore, Butler faces the same hurdle as the others.

“They’ve got to face the issue,” Bobo said. “We’re not gonna spread them out and take the easy way out. We’re gonna be physical and have to run the ball, and to do that, you’ve got to be able to have tight ends.”

Though the thin number of tight ends would certainly be an issue in the regular season, it’s proven to be an advantage thus far as the players gain that much more personal experience. Cox can focus exclusively on his three guys rather than be forced to monitor a position group with far more members.

“You can tell that they’re getting gassed, which is good for them right now,” Cox said. “But every period, I’m able to sit down and go through stuff on the side with guys and I’m able to get a lot more one-on-one coaching, which is huge…Those three guys are getting quality reps, they’re getting a lot of reps.”

With the added reps, Cox’s focus lies in conquering the transition from receiver to tight end. Though it’s far from complete, the evolution is taking shape through two weeks of practice.

“They’ve all bought in to what we’re doing, what we’re teaching and they want to be those guys that can put their hand on the ground and be physical,” Cox said. “Sometimes in spring, you like seeing when they get their butt whipped a little bit up front on the line because it puts into perspective how physical that position is when you’re an attached tight end.”