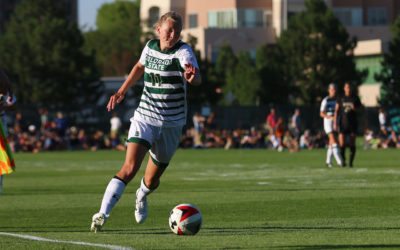 CSU Junior Kaija Ornes keeps a ball in play during the second half of action against CU. CSU and CU ended the game tied at zero. (Elliott Jerge | Collegian)

Between games, practices and several big announcements, one would hardly know that it’s the offseason for the Colorado State women’s soccer team.

Although spring games hardly matter as much as regular season games in the fall, these exhibition contests provide the roster with valuable in-game experience.

“You just don’t use as many players as in the fall,” Hempen said. “It just kind of builds to a core of about 15-16 kids that play a good bit. We look at the spring as an opportunity for those that did not get as much of an opportunity to compete in the fall to get that game experience in the springtime.”

Even though rosters are not at full strength and the results are trivial, spring soccer can make for some pretty memorable experiences. On Tuesday, the Rams became the first athletics team aside from football to use the new on-campus football stadium. The exhibition match versus Northern Colorado also marked the first time the Rams had ever played a night game on campus.

“It was really neat,” Hempen said. “We had the scoreboard on, the ribbon was on, the lights were on and music was playing in there. It was a neat environment for our kids.”

The facilities at the new on-campus stadium are certainly an upgrade for the CSU soccer team, but don’t expect the football stadium to become the Rams’ new home.

“If we can do it once a year, probably in the spring, that would be great,” Hempen said. “It’s a novelty, kind of. It was pretty cool, but everything you try and build up atmosphere wise kind of goes away when you look up and see 30,000 empty seats.”

It’s no 200 million dollar stadium, but Ram fans can look forward to watching games at an improved CSU Soccer Field this fall. In late January, the Rams announced a fundraiser to help enhance the field with a starting goal of $3,000. Now just over two months later, the soccer team has raised nearly $12,000.

“Will that help us buy bleachers? Probably not, but there’s other things we can do to show improvement,” Hempen said. “We want to look out there and say, ‘Oh, wow that’s the soccer facility.’ Like softball has ‘Colorado State Softball,’ on the fence. Something as simple as that to say, ‘This is ours.’ Those things are doable with the money that we raised.”

Along with new amenities, the Rams will be playing with two newly elected captains this fall. With the upcoming graduation of former captains Taylor Hodgson and Janelle Stone, the team recently voted junior Kaija Ornes and sophomore Halley Havlicek into the leadership positions. Although each are now leaders on the field, their CSU careers have been anything but similar.

“Those are two completely different kids in that Halley’s been pretty consistent and healthy throughout her short career,” Hempen said. “And Kaija’s battled through every practice, every game and dealt with so much from a physical standpoint. The emotional ups and downs have probably grounded her more than any other kid on our team and I think that’s a good spot to be as a captain.”

One area the new captains will not have to worry about is transitioning into a new home. With the CSU Soccer Field’s inaugural season in the books, the Rams are looking forward to concentrating all their attention on the game itself.

“We get our new facility and we kind of talked a lot about finally having our own place to play and maybe our minds were distracted,” Hempen said. “I’m excited that we can completely and utterly give ourselves to the game and not worry if the grass is going to grow in time for the preseason and all that other stuff that goes with it.”

The Rams resume their spring schedule versus Metro State on Sunday at 1 p.m. at the CSU Soccer Field.