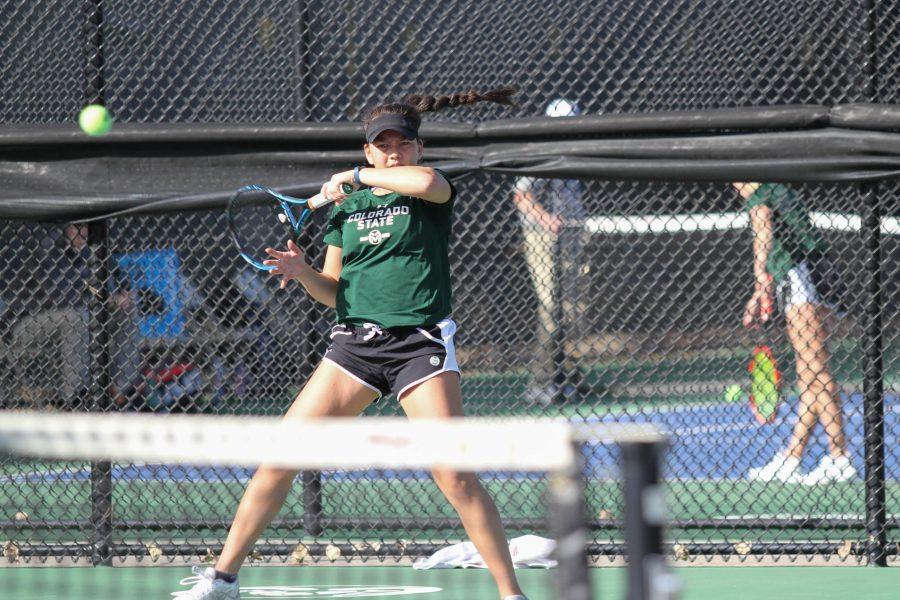 Freshman Priscilla Palermo hits against her oppenent from Omaha during the Rams first home matches of the season on March 3. (Ashley Potts | Collegian)

Following a grueling weekend of traveling, the Colorado State women’s tennis team picked up its first Mountain West victory against Air Force after dropping their dual to New Mexico. This win was significantly special for the Rams as it was their 10th win of the season, the most in a regular season since 2007.

The Rams began their weekend in New Mexico to face the Lobos for a road match at the McKinnon Family Tennis Stadium on Friday. With doubles to begin the matchup, Emily Kolbow and Riley Reeves set the tone defeating Natasha Munday and Diana Wong at No. 2, 6-2. With a strong lead by their teammates, Alyssa Grijalva and Priscilla Palermo rallied to a tiebreak against Hsiang-Wen Huang and Danielle Quevedo, 6-6. However, the Ram duo eventually lost the tiebreaker and the match against the Lobos. Emily Luetschwager and Emma Corwin were unable to clinch the team point as they also fell to their Lobo opponents, Lauren Rich and Bronte Murgett, 6-2.

Moving onto singles, Emily Luetschwager showed off her skills with a victory over Ruth Copas, 6-2, 6-2. Luetschwager’s win was the only victory for the Rams in singles play and capped her 11th individual victory of the season, the second-most on the Rams’ roster.

“Doubles was real close, and Emily (Luetschwager) had a great win in singles,” coach Jarod Camerota said. “We had some close singles matches that we left out there. We just need to keep working and believing and we will be fine.”

With Camerota’s optimism and grit embraced by the players, the Rams continued their road trip to Colorado Springs to face off against another Mountain West opponent, Air Force.

“We need to continue to play with emotional maturity and just be a little more solid than today,” Camerota said of his players.

Grijalva and Palermo fought hard against TJ Fumagalli and Elizabeth Barnickel, ultimately clinching a win at No.1 for the Rams, 7-5. The freshman phenom duo consisting of Corwin and Luetschwager secured CSU’s team point, dominating against Carley Hatcliff and Meredith Laskey, 6-3.

CSU fueled off this win, with their first league victory in sight.

Corwin led singles play at No. 6 against Falcon Clarissa Jolley, adding to the winning momentum, 6-1, 6-2. Reeves extended the Ram lead to 3-0, besting her competitor 6-1, 6-2. To secure the Rams’ first MW victory, Grijalva quickly defeated Laskey, 6-1, 6-3 as Kolbow followed right behind to claim an additional singles win against Ashleigh Harvey.

“We’ve been so close,” Camerota said, reflecting on CSU’s challenging league slate to this point. “We knew we had to just keep competing and working hard and the wins would eventually come. This feels good, and I’m really proud of the team.”

The Rams will return home April 19 and 22 to conclude their regular season against non-conference opponent Northern Colorado and MW rival Wyoming, respectively.